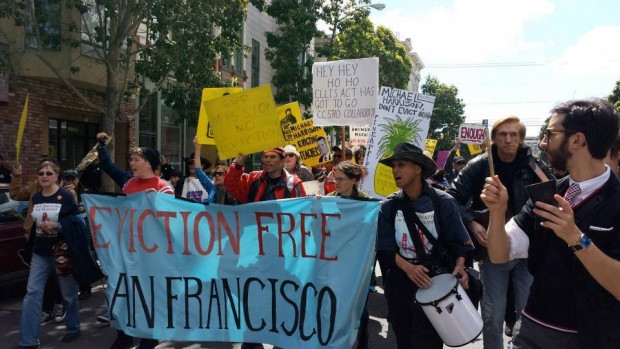 March On Vanguard Properties Keep Benito Santiago’s In His Home

In an action organized by Eviction Free San Francisco, it was estimated that nearly 200 tenants and community supporters congregated at the 24th Street/Mission BART station at 11:30 a.m. to march to the offices of Vanguard Properties at 2501 Mission Street in support of San Francisco native Benito Santiago’s campaign to fend off an Ellis Act eviction from his home at 151 Duboce Avenue.

63-year-old Benito has lived in his one bedroom apartment since 1977, but is now facing an Ellis Act eviction at the hands of his new landlord, Pineapple Boy LLC, owned by Michael Harrison, one of the co-founders of Vanguard Properties.

Festive drumming and chants including, “What do we want? No evictions.” inaugurated the rally at the BART Plaza.

Tony Robles from Senior And Disability Action joined his fellow board member from the Manilatown Heritage Foundation, Theresa Imperio, in relating Benito Santiago’s struggle to keep his home to that of the mostly Filipino residents of the I-Hotel in Manilatown (near Chinatown) to resist their evictions in 1977.  They read a letter to Michael Harrison demanding that he rescind Benito’s eviction.

Before the assembled group left the BART Plaza for the march, Erick Arguello from Calle 24 informed the crowd that Vanguard Properties is one of the leading real estate speculators prospecting for profits in the Mission District during this latest real estate boom.  He also pointrd out that Vanguard had refused to meet with his group to discuss retaining the promised community benefit of a commercial space that is part of a condo development on 24th Street that Vanguard took over from the initial developer.  Despite the reneged upon promise, Vanguard is now selling that space for $1.1 million.  Additional groups present at the rally and march included Central City SRO Collaborative and Housing Rights Committee of San Francisco.

Marchers then walked in the streets to the Vanguard offices via 24th, Valencia and 21st Streets, accompanied by a moving line of SFPD officers on either side.   This SFPD presence seemed to serve no legitimate purpose and instead only helped deter interested people from joining the march by forming a barrier between the sidewalk and the peaceful, but spirited, march.

Upon arriving at Vanguard Properties’ offices, participants found both the Mission Street and 21st Street entrances locked, preventing Benito and his friends from delivering letters to his landlord demanding the cancellation of the pending Ellis Act eviction.

Erin McElroy from Eviction Free San Francisco introduced Benito, who gave a moving and impassioned account of his present ordeal fighting his Ellis Act eviction from his home.

He explained how he prepared to sell and give away some of his possessions when he and the tenants of other apartments at 151 Duboce Street received legal notices on November 24 and December 13, 2013.

Since then, with the help of community organizations, Benito has educated himself about his rights that allow him at least one year of continued residency because of his age and he has initiated this campaign to stay in his home.

Benito also shared his pride in his job as a para-professional teaching music to special needs children at Phillip and Sala Burton High School.  Benito has worked for the San Francisco Unified School District since 1999 and explained that he will find it difficult, if not impossible to continue helping his students if an eviction forces him to move from San Francisco or even onto the street.

The group of tenants and committed community activists concluded this latest mutual aid action by calling landlord Michael Harrison on his cell and office phones to urge him to rescind Benito’s eviction.  Those phone numbers are 415-875-7428 (cell) and 415-321-7000 (office) for anyone willing to do a follow-up call-in action on Benito’s behalf.

Benito is but one of many San Francisco educators whom real estate speculators have forced or are threatening to force from their homes through no-fault evictions like Ellis Act evictions.

Because of this disturbing fact, Eviction Free San Francisco has organized a further action, Keep Our Teachers March to End the Displacement of San Francisco Educators, on Friday, April 11th at 5 PM beginning at the corner of 20th and Dolores Streets.  Join us, along with teachers, students, tenants, and other housing rights activists, in support of this extremely worthy cause.  More information here: http://evictionfreesf.org/?p=968.