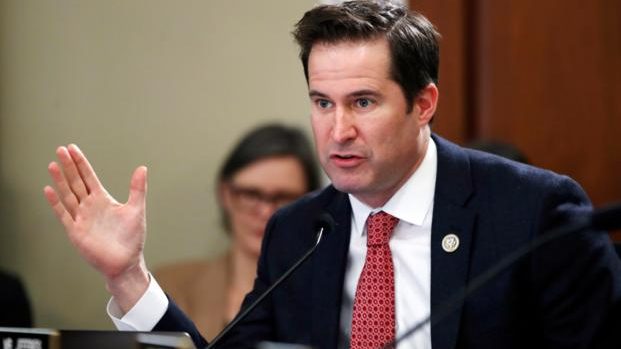 A lawmaker who earned the Bronze Star during combat in Iraq as a Marine officer is denouncing President Donald Trump’s foreign policy as “rudderless,” and calling on active-duty military officers to question the orders they’re getting from the commander in chief and refuse to follow them if they’re not lawful.

Rep. Seth Moulton, a Massachusetts Democrat and former presidential candidate who ended his White House bid in August, made the remarks in a speech at the Atlantic Council on Thursday, a day after Trump triumphantly addressed the nation and announced that Iran seemed to be backing down from hostilities.

Moulton called for Trump to declassify and release the legal notification he sent to Congress regarding what officials have called an “imminent attack” planned by Soleimani that necessitated his assassination.

“If there is intelligence that shows this strike prevented a new and imminent threat to Americans, I have yet to see it,” Moulton said, according to prepared remarks. ” … I fought in a war a president started because of cooked and false intelligence; we cannot let this Administration repeat that mistake.”

The Pentagon has joined the White House in describing the purported attack plan as “imminent;” Defense Secretary Mark Esper told reporters it was accurate to describe it as days away at the time of Soleimani’s death.

Moulton, a longtime outspoken critic of Trump’s policies and decisions, has publicly voiced concerns with the decision to kill Soleimani in the days following his death, saying the consequences of the strike were unclear.

“I do not mourn for this man who is directly responsible for some 600 American deaths in Iraq — a few of whom were my friends,” Moulton said in his Atlantic Council Speech. “But it is not that simple. It was telling, that of every fellow veteran who texted me the night he was killed, not one celebrated his death — though they too, I’m sure, would much rather him dead than alive. They said, ‘What the hell is going on here?’ And, ‘Please tell me there’s a plan.’ Sadly, I’ve seen no evidence that there is.”

Iran, he added, is unlikely to let a “zero-casualty ballistic missile strike” settle the score between the two countries.

The Trump administration needs to develop a clear policy regarding Iran, and to refocus on the greatest foreign threats to the nation, including China, Moulton said.

“And for those members of our military in the chain of command, here in Washington or overseas — look very carefully at every order given to you by this president,” Moulton said. “It is our duty to make sure everything done in the name of the United States military is lawful; and that burden falls on us. … We have an opportunity to call on our military officers around the world to bring new scrutiny to their sworn oath to obey lawful orders, and only lawful orders.”

The issue of lawful orders came to the fore this month when Trump threatened to destroy Iranian cultural sites if the country escalated the conflict, an act that would fall afoul of international law. The president ultimately backed down from those threats, and Esper said the U.S. military would not commit such an act and did not expect to be ordered to do so.

Moulton, who voted to impeach Trump in December, served in the Marine Corps from 2001 to 2008. He assumed office in January 2015.