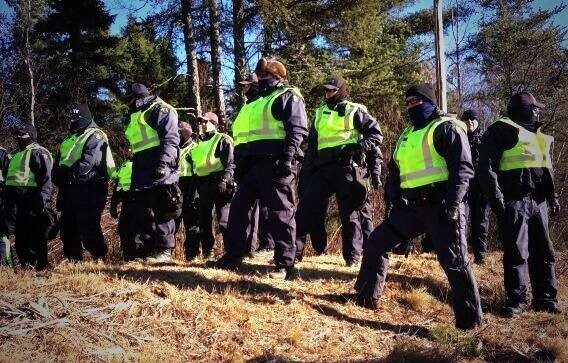 The RCMP turned out in full force again friday to protect SWN Resources corporate interests, stopping traffic on Highway 11 near Rexton due to the ongoing anti-shale gas protest.

One person asked, Is this Canada? where cops protect the corporations that the government is literally paying to steal our resources and put the people who are standing up for their land…..native and non-native in jail. Is this the Canada our grandparents and great grandparents fought for? And why are the RCMP wearing masks when it’s illegal for demonstrators to do same?

This man was arrested after standing on the side of the road with his sign that reads, Dear government Alward, you are allowing the children of Kent-North be used as laboratory rats. Have you no shame?

At the beginning of November reports came in about Mi’kmaq Warrior being beaten and kicked in the head .

Jason Augustine, Warrior Society district chief, said he was kicked in the head by an RCMP officer after he was cuffed and arrested during the Oct. 17 raid.

Augustine said he was later diagnosed with a concussion at the hospital in Moncton, NB.

“I was kicked in the head three times when I was taken down,” said Augustine. “I wasn’t resisting arrest, I had my hands behind my back, and this one RCMP started bashing my head in.”

Augustine said he was nodding-off while he was held in one of the cells with other warriors at the Codiac RCMP detachment in Moncton. He claimed his head was hit against the wall as he was being taken to the ambulance.

As reported by APTN on November, 18th, several unfilled ‘shot holes’ have been discovered along a seismic testing line completed by SWN Resources Canada in late July, 2013.

These shot holes, located in the backwoods of New Brunswick, appear to have pierced a near-surface aquifer. Upon first-hand verification I could see water flowing unabated from the holes. Some kind of mechanical fluid had mixed with the water and had made a sloppy, likely toxic, mess of the surrounding forest floor. It is unclear whether the aquifer broke in July, when the shot holes were blasted, or more recently.

The environmental risks of such a procedure are potentially higher than highway-side ‘thumping’, and the procedural steps to take if an aquifer is ever pierced are well documented within the New Brunswick Oil and Natural Gas Act. In fact, there’s whole sub-sections related to what to do, as an industrial player, if you should so happen to blast your way through an aquifer and water starts spilling all over the place.

‘We were within our rights,’ protester says

LaFrance contends the protesters were abiding by the distance restriction.

“I was emphatic in saying we were within our rights of being where we were because we’re more than 20 metres away form the equipment, and [an officer] said he didn’t want to debate that with me, and that it wasn’t up for discussion and we’re not here to discuss legal papers,” LaFrance told CBC News.

“I said, ‘We’re still within our rights’ and he says, ‘Right now you aren’t.’ So he forced us back across the other side of the Richibucto sign, and he wanted us to go back to the overpass, and we refused to go any further than we did and that’s when things got a little heated, but not out of control,” LaFrance said.

“Then the RCMP moved in on some of the protesters and arrested them when they were well within their rights to be where they were.”

The RCMP say the protest against shale gas exploration turned violent, And people began throwing rocks at police and RCMP vehicles, Const. Jullie Rogers-Marsh says no one was hurt when violence erupted, five people were arrested, bringing to 15 the number of protesters arrested since exploration company SWN Resources was granted an injunction last Friday.

In much corporate-owned media, when there is not lazy disregard of historical context, there is outright institutionalized contempt for an understanding of modern colonialism and oppression of First Nations people in Canada. In coverage of past resource disputes with First Nations, we had commentators framing the discussions with a narrative that revolved around the absurdly inverted premise that First Nations people were not responsible stewards of natural resources (having responsibly stewarded this land for thousands of years before Western industrial capitalism came to nearly decimate the entire planet within the last one hundred or so).

The Provincial Court of New Brunswick has approved an injunction which names 5 people, including “Jane” and “John Doe”, to target the HWY 11 encampment. This encampment has successfully turned away SWN vehicles and is preventing SWN from conducting seismic testing on unceded Mi’kmaq lands. Each day that SWN cannot conduct its testing, it costs the company $54, 000. SWN is once again looking to the RCMP to enforce the injunction most recently granted. At this time, the RCMP have used the injunction to target the Mi’kmaq and have set up a “check point” on HWY 11, where the RCMP stop vehicles to arrest passengers and drivers at their whim.read more

Canadian colonialism never ended; it is an ongoing process that will not end until cultural genocide is accomplished or we decide to end it. And New Brunswick is now the focus of a growing resistance.

On Monday Dec. 2nd HWY 11 Land Defenders are asking you to show your solidarity by taking action in your community. Where possible, highway shutdowns are encouraged however any action of support, such as banner drops, are welcome.