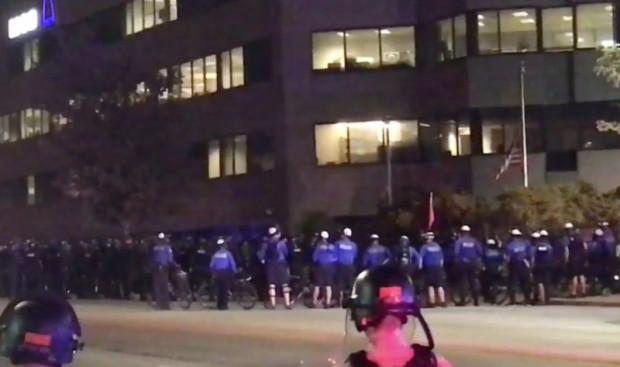 Police in St. Louis conducted mass arrests on Tuesday night after a group of activists blocked traffic on a city highway in the latest protest against former police officer Jason Stockley’s acquittal for the 2011 shooting death of Anthony Lamar Smith, an unarmed black man.

Faced with a heavily armored police line as they marched up the Interstate, the protesters reportedly chanted, “We don’t see a riot here. Why are you in riot gear?” They were then maneuvered off the road by law enforcement officers, who proceeded to arrest them one by one.

The view from behind police line here. Camera is zoomed in all the way. Police arresting 1 by 1. Protesters sitting on sidewalk #stlverdict pic.twitter.com/be7SZnVXTn

Alarmingly, police also arrested journalist Jordan Chariton and his cameraman Ty Bayliss, both of The Young Turks, during the protests. According to at least one observer, law enforcement officers targeted members of the press during the opening minutes of their arrests.

Following the arrests, an estimated crowd of 100 people massed outside the St. Louis Justice Center, where those detained by police were reportedly being held. Chanting “we are the people, the mighty mighty people,” the crowd later thinned to several dozen who camped in tents erected outside the government building.

Protests following the Stockley verdict have grown contentious at times. In September, St. Louis Police Department officers were filmed chanting “Whose streets? Our streets!” as they arrested activists in the city’s downtown area.