Quds Day demonstrations condemned the so-called U.S. Deal of the Century and vowed to support Palestinians facing the prospect of losing their rights under the U.S.-brokered plan.

SANA’A, YEMEN — Massive demonstrations took place across Yemen’s major provinces on Friday to oppose a meeting of leaders of Arab and Islamic countries who gathered in Saudi Arabia. Demonstrators also rallied against the Trump administration’s “Deal of the Century” — as Friday is also international “Quds Day,” when protests are held across the world to show solidarity with Palestinians.

Saudi Arabia hosted Arab leaders for three summits in the holy city of Mecca in a bid to rally support against Yemen, and to curb what they claim is Iranian-backed terrorism. The summits come amid escalating tensions between the United States and Iran and follow a series of Houthi retaliatory attacks against a Saudi oil pipeline deep inside Saudi territory, which resulted in the temporary shutdown of the pipeline.

In Yemen’s capital city of Sana’a, hundreds of thousands of residents from the suburbs of the city and from neighboring provinces gathered on Airport Street carrying Yemeni flags and holding banners emblazoned with messages challenging the Saudi regime and encouraging Yemen’s Army to continue to target the Kingdom of Saudi Arabia and the United Arab Emirates.
In Hodeida province in western Yemen, hundreds of thousands of protesters took to the streets despite the ever-present threat of incoming artillery shells, snipers’ bullets, and Saudi warplanes hovering above. Saudi warplanes are ever-present in the skies over Hodeida but intensified their presence as residents began preparations for the upcoming rallies.

The demonstrations, which were organized by the Houthis with the support of local residents, featured a military parade of Houthi armored vehicles, tanks, military crews, and weapons, as well as infantry forces. The move was an intentional message to the Saudi-led Coalition, who has beefed up its military presence in the port city in violation of the UN-brokered Stockholm Agreement. 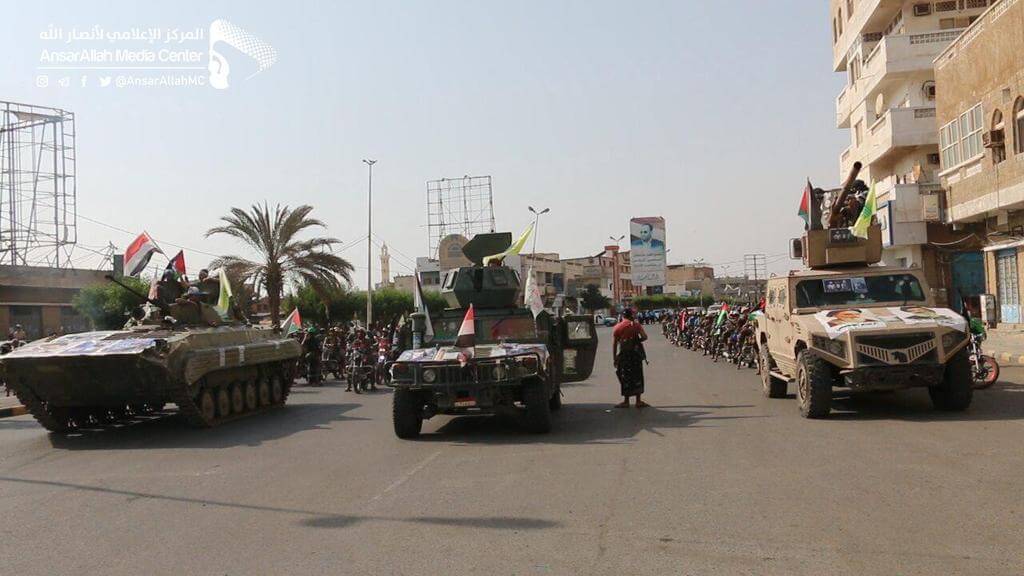 In the Sada’a province in northern Yemen, hundreds of thousands rallied in Ibb, Taiz, al-Jawf, Reimah, Dhamar, Amran, the northwest province of Hajjah, and the central province of al–Mahweet.

The protests drew crowds from across Yemen’s deceleration divides: Shaafa’is, Salafis, Zaydis, and Twthis, as well as most major national parties, were among the protests. The Grand Mufti of Yemen — Shams al-Din Sharaf al-Din, the highest religious authority in Yemen — was the keynote speaker at the rally in Sana`a, where he derided the gathering of Arab leaders in Saudi Arabia, and said that the summit was little more than cover for the Coalition’s hideous crimes and would serve as a pretext to mobilize more mercenaries to Yemen under the pretext of protecting Mecca.

For more than four years Saudi Arabia, backed by the collective military might of the world’s most powerful nations, has sparked the world’s worst humanitarian crisis in Yemen, leaving tens of thousands of civilians dead and causing the collapse of the country’s health services.

According to Yemeni military leaders who spoke to MintPress, the recent attacks on Saudi Arabia and the U.A.E. are a direct response to the crimes committed Saudi-led Coalition airstrikes in Yemen, which have been repeatedly criticized by the United Nations and human rights groups for intentionally targeting civilians.

Demonstrations also focused heavily on solidarity with Palestinians on international “Quds Day.”  Quds Day falls on the last Friday of every Ramadan and rallies are held across the globe in a show of support for the Palestinian cause. Demonstrations condemned the so-called U.S. Deal of the Century and vowed to support Palestinians facing the prospect of losing their rights under the U.S.-brokered plan.

On Thursday, the leader of Yemen’s Houthi Ansarullah movement reiterated his country’s support for Palestine in the face of Israeli occupation, calling on the Yemeni people to express their solidarity with Palestinians by partaking in International Quds Day rallies.

This year’s Quds Day rallies come weeks before a high-profile summit to be held in the Bahraini capital Manama, where the Trump administration is expected to unveil its so-called “Deal of the Century” to end the Israeli-Palestinian conflict.

Protesters in Iran, Iraq, Palestine, Syria and Bahrain also took to the streets on Friday to mark Quds Day, in an impassioned show of opposition to the “deal.”

Saudi Arabia recently accused the Houthis of launching ballistic missiles towards Mecca, which hosts millions of Muslim pilgrims around the year, especially in the month of Ramadan. However, the Kingdom provided no evidence to back its claims and the accusation is being seen by many as an attempt to rally the support of the Muslim world against Yemen. Any attack on Mecca would be seen in the Muslim world as a sacrilegious act and would serve to galvanize popular support for the Saudi-led Coalition war in Yemen, which has drawn international condemnation and engendered support for the Yemeni people. 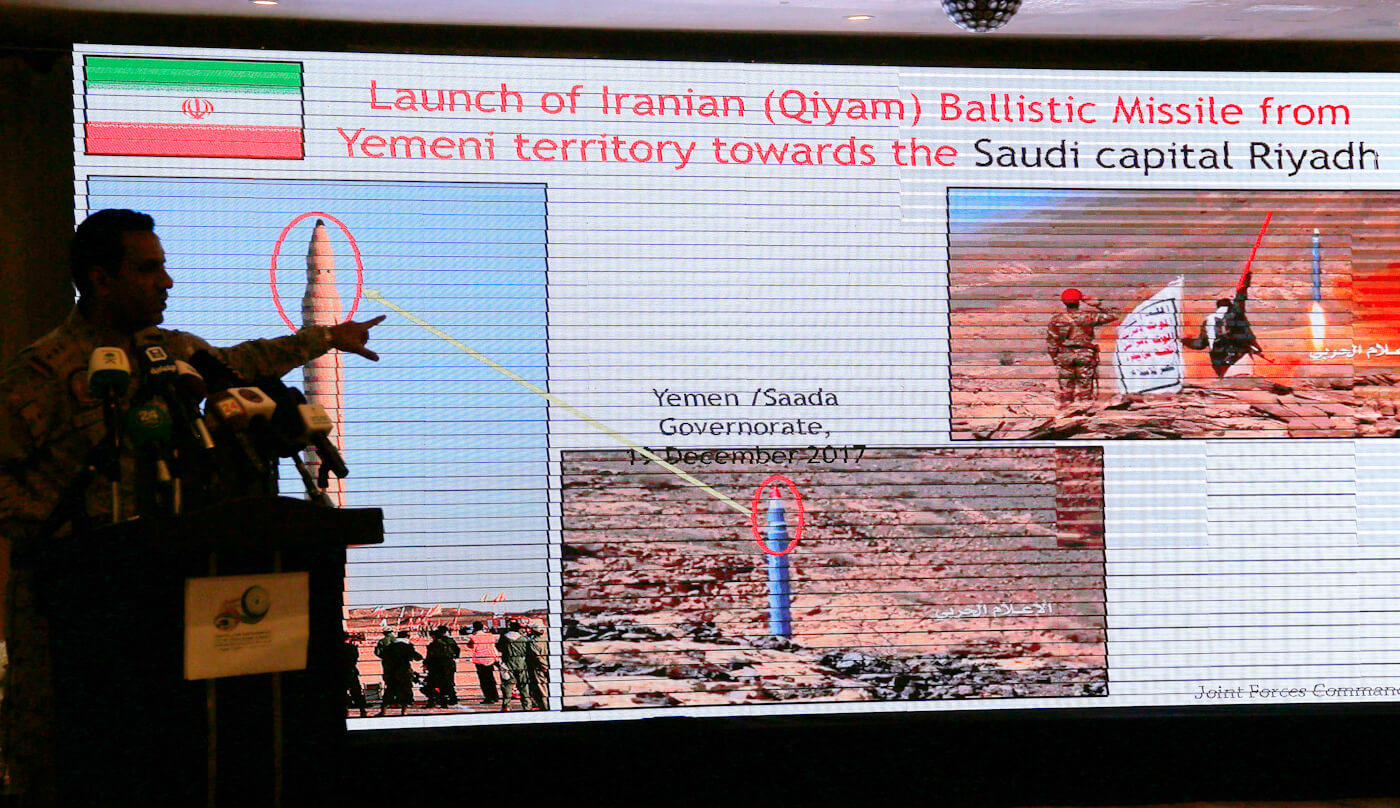 Col. Turki al-Malki, spokesman for the Saudi-led coalition, points to a screen showing what he said was evidence of Iranian support to the Houthis in Yemen in Mecca, Saudi Arabia, May 31, 2019. Amr Nabil | AP

In fact, from the very first moment that Saudi Arabia made the claim of a Houthi attack on Mecca, Arab social media was hit with a wave of posts rife with sectarian hatred and praise for the Saudi royal family. “The claims that we targeted Mecca seem like a desperate attempt to gain justification for a war which has killed thousands of civilians,” Mohammed al-Houthis told demonstrators in Yemen.

Indeed, as Arab leaders arrived at the International Airport in Jeddah, Saudi Arabia, they were greeted by a government-organized exhibition that included a number of fragments of the wreckage of Yemeni missiles and drones.

Mohammed Abdulsalam, spokesman for the Houthi movement, said in response to the exhibition that it is a Saudi attempt to divert attention from its brutal crimes, which it couldn’t cover with a thousand exhibits. He added: “You are the ones who ignited the aggression against Yemen, so stop your aggression and our response will be stopped.”

On March 26, 2015, Saudi Arabia, supported by the United States, launched a large-scale attack on Yemen under the pretext of reinstating ousted former President Abdrabbuh Mansur Hadi and defeating the Houthi Ansar Allah movement, which had gained popular support following the Arab Spring.

After four years of war, the Saudi Coalition has been unable to defeat the Houthis, nor to restore the popularly-ousted Hadi to power. The Houthis, who comprise a major component of Yemen’s resistance to Saudi interference in their country, have recently begun a series of retaliatory attacks on Saudi Arabia and the United Arabia Emirates.