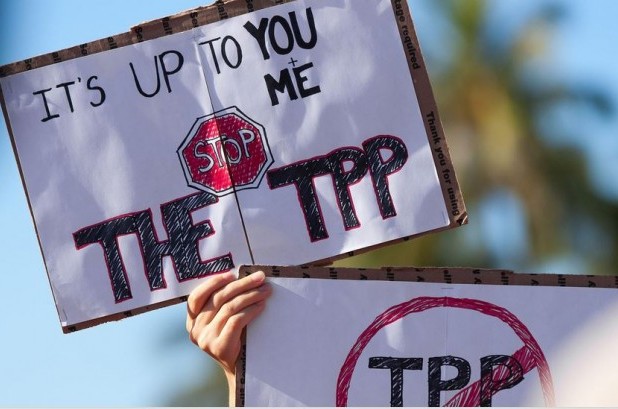 Mass Mobilization To Stop The TPP Announced, As Text Is Released

A mass mobilization in Washington, DC from November 14th  to 18th  has been announced to begin the next stage of the campaign to stop the Trans-Pacific Partnership (TPP).  The TPP was made public 10 days from the actions.

The protest, co-sponsored by 59 organizations, is being spearheaded by Popular Resistance and Flush The TPP and includes environmental, human rights, labor, climate change and good government groups. They have been organizing this mobilization for months knowing that the TPP would be made public around this time.

“At its root, the TPP is about modern colonialism. It is the way that Western governments and their transnational corporations, including Wall Street banks, can dominate the economies of developing nations,” said Margaret Flowers, co-director of Popular Resistance. She continued “The reality is that without trade justice there cannot be climate justice, food justice; there cannot be health justice or wage justice. That is why people are mobilizing to stop the TPP.”

Mackenzie McDonald Wilkins, organizer for Flush The TPP, said “The TPP impacts every issue we care about as a result, a unified movement of movements to stop the TPP has developed. People who care about corporate power versus democracy and our sovereignty or about jobs and workers, the environment and climate change, health care, food and water, energy regulation of banks are mobilizing to make stopping the TPP their top priority.”

On November 16th through 18th the groups will begin their protests on Monday morning at the US Trade Representative building on 17th Street with the message that the TPP betrays the people, planet and democracy.  This will be followed that evening by a protest that begins at the US Chamber of Commerce and White House then marches along K Street and ends at the Reagan International Trade Center. The next day the groups will have an international focus protesting at multiple sites along Embassy Row to stand in solidarity with people around the world who are fighting to stop the TPP. On the final day the groups will focus on Congress.

Below are comments from our allies workint to Stop the TPP with links to their full statements:

AFL-CIO: From what we have reviewed so far, we are deeply disappointed that our policy recommendations and those of our trade reform allies in the environmental, consumer, public health, global development, and business sectors were largely ignored.  The investment rules still provide expansive new legal rights and powers to foreign businesses to challenge legitimate government actions, the labor enforcement provisions are still inadequate to address the enormous challenges posed by this deal, and the lack of enforceable currency rules subject to trade sanctions mean the promised new export markets may never materialize.

Public Citizen:  Today’s long-awaited release of the text of the Trans-Pacific Partnership’s (TPP) reveals that the pact replicates many of the most controversial terms of past pacts that promote job offshoring and push down U.S wages while further expanding the scope of the controversial investor-state system and rolling back improvements on access to affordable medicines and environmental standards that congressional Democrats forced on the George W. Bush administration in 2007.

Friends of the Earth: The environment chapter, which actually only deals with a narrow range of conservation measures, is largely unenforceable and is substantially weaker than trade deal conservation provisions negotiated by President George W. Bush. In fact, the office of the U.S. Trade Representative has never brought suit or otherwise effectively enforced trade deal conservation obligations.  The TPP investment chapter would allow firms to sue governments for billions in money damages if climate, environmental or public health regulations interfere with expected future profits. The TPP is designed to protect “free trade” in dirty energy products such as tar sands oil, coal from the Powder River Basin, and liquefied natural gas shipped out of West Coast ports. The result would be more climate change from carbon emissions across the Pacific.

Sierra Club: The chapter excludes core environmental commitments that have been included in all U.S. trade agreements since 2007 and fails to meet the minimum degree of environmental protection required under the Bipartisan Congressional Trade Priorities and Accountability Act of 2015, also referred to as “fast track.” Even more, it falls far short of the meaningful protections called for by environmental groups including the Sierra Club, the nation’s oldest and largest grassroots environmental organization. Provisions in the text that have been touted as new are generally hampered by weak language that would not adequately protect the environment.

The Natural Resources Defense Council: This trade agreement would allow foreign corporations to challenge our health, safety and environmental protections in a foreign tribunal outside our legal system, and it would weaken those bedrock safeguards in the United States. While there are some positive conservation measures, the agreement’s substantial shortcomings should lead Congress to reject it.

FIght For The Future: Now that we can read the final TPP text, it’s obvious why it was kept in total secrecy for so long: this agreement is a wishlist for powerful special interests and multinational corporations. The Intellectual Property chapter confirms our worst first about the TPP’s impact on our basic right to express ourselves and access information on the Internet. If U.S. Congress signs this agreement despite its blatant corruption, they’ll be signing a death warrant for the open Internet and putting the future of free speech in peril.

Open Media: The TPP will force Canada to overwrite its current balanced copyright regime with draconian U.S.-style rules, including a 20 year extension to copyright terms. New Prime Minister Justin Trudeau has yet to confirm whether Canada will ratify the TPP. Digital rights group OpenMedia has helped rally over 3.6 million people against the TPP’s secrecy, and warns the deal is a serious threat to Internet freedom.

United Steel Workers: The USW is unalterably opposed to the TPP because it’s a dagger twisting in the heart of American manufacturing. Even the Wall Street Journal predicted the deal would cause a massive trade deficit in manufacturing which would result in hundreds of thousands of job losses. This sector has yet to share broadly in the economic recovery and is shedding good, family supportive jobs at an ever-increasing pace. The TPP provides incentives for U.S. companies to outsource production and offshore jobs – and that is far from the kind of trade policy America needs. The TPP may gain the United States brownie points with other countries, but at the cost of American economic strength and national security.  In section after section, this proposed agreement compromises America’s economic future and inflicts enormous damage.

Pride At Work:  Now it’s official: the TPP fails the test for important LGBT concerns. It is troubling that the United States would bring countries such as Brunei and Malaysia, with their state-sponsored persecution of LGBT individuals, into the fold of the TPP. But it is unconscionable that our nation would not use the leverage of the TPP negotiations to insist that these nations make improvements on ending LGBT persecution and discrimination. Instead of living up to its stated goal to improve the rights and protections of LGBT people throughout the world, the Obama Administration is instead offering an implicit ‘okay’ to the LGBT status quo in Brunei and Malaysia.