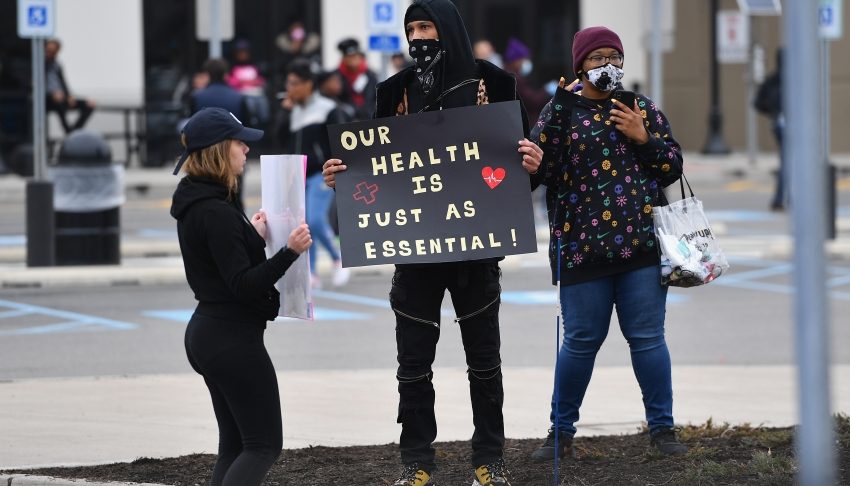 Mass Strikes Across The US This May Day

Above photo: Militant labor actions are set to engulf the country this May Day. Angela Weiss/AFP via Getty Images.

Toiling amid a pandemic and a callous response from corporate America and the federal government that is exposing millions to deadly hazards and deepening poverty, workers across the country are rising up, planning hundreds of strikes and sickouts for International Workers’ Day on May 1.

At a time when worker organizing could be stifled by physical distancing rules and the Trump administration’s disabling of the National Labor Relations Board, workers are walking off the job in massive coordinated walk-outs and sick-outs targeting major employers such as Amazon, Whole Foods, Target, Walmart, FedEx, and Instacart, demanding hazard pay, personal protective equipment and other basic protections.

May Day actions throughout the United States will include worker strikes, car caravan protests, rent strikes, and a host of social media onslaughts urging work stoppages, and boycotts of major corporations that are failing to fairly pay and protect their workers amid the pandemic, activists say. Activists are also pressuring for rent and debt relief, and a “People’s Bailout” demanding a more equitable stimulus and economic recovery plan that prioritizes workers.

Long overworked and underpaid, warehouse and food industry workers (including grocery clerks, meatpackers, and farmworkers) are now deemed “essential”—responsible for hazardous jobs at the epicenter of the Covid-19 storm. Yet while some unionized workers have secured hazard pay and protective gear, millions of these workers on the pandemic’s front lines remain in or near poverty and without adequate healthcare or safety protections. Now they’re striking back, shining a spotlight on the struggles of low-wage workers laboring amid viral hazards while corporations like Amazon and Instacart report booming business and profits.

Even as unemployment skyrockets above 20% (with an astounding 30 million new claims since the beginning of March), Amazon alone is raking in $11,000 per second and its shares are rising, the Guardian reports. The company’s CEO Jeff Bezos, meanwhile, has seen his personal fortune bloat to $138 billion amid the pandemic.

Protesting unsafe conditions and lack of hazard pay for many employees, Target Workers Unite is waging a mass sickout of the retail chain’s workers, stating, “We want to shut down industry across the board and pushback with large numbers against the right-wing groups that want to risk our lives by reopening the economy.”

On its website, the group describes “atrocious” foot traffic in stores, “putting us at needless risk when greater safety measures are required to ensure social distancing. Workers nor guests have been required to wear masks…Our maximum capacity of guests have been set too high.”

Whole Worker, a movement of Whole Foods workers pushing for unionization, plans a mass “sickout” for what is also being called #EssentialWorkersDay. Workers at the non-union corporate chain, which is owned by billionaire Bezos, are demanding guaranteed paid leave for employees who self-quarantine, reinstating healthcare coverage for part-time and seasonal workers, and the immediate shutdown of any store where a worker tests positive for Covid-19. According to organizers, 254 Whole Foods workers have tested positive for the virus nationwide, and two have died.

Gig economy workers for Instacart, the app-propelled tech corporation that dispatches “shoppers” for customers, will wage their second work stoppage in a month, after a March 30 strike demanding hazard pay, paid sick leave and safety protections. Despite Instacart’s booming business amid the Covid-19 pandemic, “Most workers STILL haven’t been able to order, let alone receive, proper PPE,” according to the Gig Workers Collective.

This week, dozens of workers at an Amazon fulfillment center warehouse in Tracy, CA walked off the job after learning that a co-worker who had tested positive for Covid-19 had died. One employee told a local television station, “We are short handed now working extra hard, and I’m questioning what I’m still doing here honestly…I’m actually nervous now and wondering if it’s even worth coming.”

Citing a “lack of response from this government in terms of PPE and mandatory [safety] standards,” the AFL-CIO will be supporting and “uplifting” striking workers at Amazon, Target, Instacart and elsewhere who are “risking their lives every day on the job,” said spokesperson Kalina Newman. “While our affiliates who work with retail workers, UFCW and RWDSU, aren’t helping organize the May Day strikes, they may uplift them. At the end of the day, we support workers who are standing up for their rights.”

In an email, Newman elaborated that the AFL-CIO is encouraging union members “to contact their congressperson stressing that the coronavirus relief packages approved so far leave many working families behind, including hardworking immigrants who provide essential services.”

Other prominent labor groups are backing the May Day strike actions. Jobs With Justice “is supporting worker walkouts across the country, from Amazon workers to Instacart drivers,” and will be “standing in solidarity with workers who are walking off the job and demanding safer working conditions,” organizing director Nafisah Ula said in an email.

A range of other groups, including the Democratic Socialists of America and new grassroots initiatives like Coronastrike will also be backing up the workers on May Day. Launched by Occupy Wall Street alumni, Coronastrike aims to “amplify the efforts and voices of those striking,” says organizer Yolian Ogbu, a 20-year-old climate justice activist.

“We’re frustrated by the inaction by these corporations,” Ogbu adds. “There is all this pent-up energy, and we’re asking people to put it somewhere. People are desperate.”

According to Fight for 15, the nationwide coalition for a $15 federal minimum wage, fast food workers have already been striking for fair wages and safety protections as they attempt to survive low-wage work and exposure to Covid-19. Since the pandemic began, fast food workers have walked off the job in Los Angeles, Oakland, Chicago, Memphis, Miami, St. Louis and other major cities, demanding personal protective equipment, hazard pay and paid sick leave.

In early April, hundreds of workers from more than 50 fast-food restaurants across California—including McDonald’s, Taco Bell, Burger King and Domino’s—walked out of work to demand better pay and safety protections, Vice reported. This week, Arby’s workers in Morris, Illinois, walked out in the middle of their shift to protest conditions and climbed into their with windows festooned with big posters stating, “We don’t want to die for fries,” and “Hazard pay and PPE now!” They are demanding $3 per hour in added hazard pay and say the corporation has not provided masks or any other protective gear.

Since March, there have already reportedly been at least 140 documented wildcat strikes across the country.

As the Covid-19 pandemic intensifies and exposes America’s inequalities, workers, so long stifled and embattled, are showing renewed force.