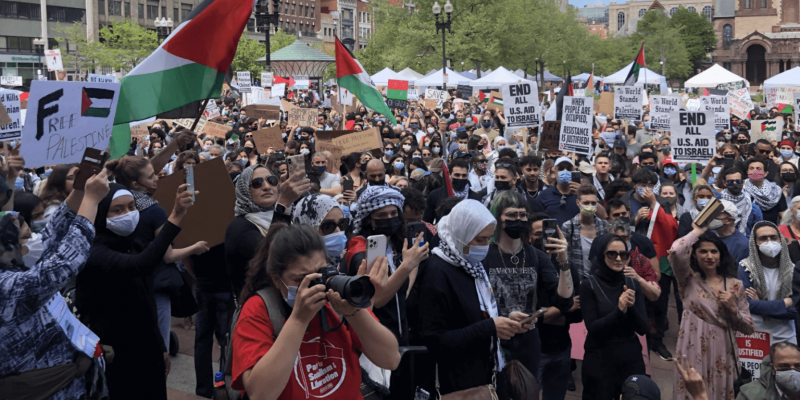 Massachusetts Activists Are Changing The Conversation On Israel

Above Photo: Boston Pro-Palestine Rally in May. Lea Kayali.

I am Jewish and, like you, I am passionate about justice for all. You probably know that the U.S. government sends about $3.8 billion a year in military funding to the Israeli government. Massachusetts sends $1.3 million a year and Massachusetts taxpayers send Israel $352,000 a day. Some of these tax dollars are used to support Israeli oppression of Palestinians.

Right now there’s a bill on congress that creates the conditions for justice and freedom for all. It’s called the Palestinian Children & Families Act, H.R. 2590. It works to ensure that U.S. taxpayer funds are not used by the Israeli government to imprison Palestinian children in a military detention system, which they do at the tune of 700 kids a year. It makes sure that they money we send is not used to forcibly displace Palestinian from their homes. 1,000 families have been displaced this year.

This bill is also a way to be transparent and report further annexing of Palestinian land in violation of international law. This bill is endorsed by 140 civil organizations and many of your constituents have been asking you for years..to write a Senate companion bill to H.R. 2590. You certainly stand up for the human rights of Americans… and our friends at the border. It’s time to stand up for the Palestinian kids. Palestinian children wonder when they will be free. When will you write a companion bill to H.R. 2590?

Many in the crowd applauded when Charney finished her statement.

“It’s time you stand up for the Palestinian kids. Palestinian children wonder when they will be free!”

JVP Action leader, Jill, asked @SenWarren to bring the Palestinian Children & Families Act to the Senate. And the crowd agreed 👏 (Her answer below 👇👇) pic.twitter.com/q1ock1ZutR

Thank you very much for the question. Let me make two points, if I can. I believe in the United States continuing to support Israel’s defense, but I do not believe U.S. taxpayer dollars should be used to expand settlements, to take over more land from the Palestinians.

Working through the best way to pursue that in the Senate, I will continue to do that whether it’s through independent legislation or working on the legislation that comes through and seeing where we are. There was an effort to try to put Iron Dome, for example, into the (spending package), that’s been taken out. That’s something a lot of people worked on, it was the right thing to do. So, I can tell you what I’m going to keep fighting for. I’m looking for the best and most effective way to do that and that’s what I’m going to keep doing.

You’ll notice that Warren doesn’t actually address the bill directly and certainly doesn’t commit to introducing companion legislation. JVP Action is calling on Massachusetts residents to contact the Senator and ask her to act.

Lynch was pressured by many of the activists currently attempting to push Warren. At a town hall meeting in 2019 a local JVP member named Milt asked Lynch to support the earlier version of McCollum’s bill, H.R. 2407. He contrasted Lynch’s opposition to Trump’s border policies with his lack of action on Palestine:

You said separating families does not protect U.S. security. Well, we’re not the only country in the world that separates kids from their families. That is also true in Israel at this moment and it’s our money that is paying for the Israeli military in very high amounts…and we support the Israeli military who arrest children…11 years to 18 years of age, imprison them and torture them and coerce them [while being] separated from their families. That’s our money that’s helping to support that.

Lynch indicated that he’d look at the bill. “I’m sure that’s a paraphrase of the bill, but if that’s the essence of it,” he responded. “I think you’re truthful, I have no reason to doubt your veracity. So yeah, I would gladly support that. I think that’s something we should do as a country.”

Are Massachusetts activists successfully shifting the local narrative around this issue? Pro-Israel groups sure think so.

Yesterday the Jewish Insider (JI) ran a piece about the evolution of Rep. Ayanna Pressley. When Pressley was elected to represent the state’s 7th district in 2018 she was seen as an Israel supporter and not a lawmaker worth worrying about. She strengthened this reputation in the summer of 2019 when she was the only Squad member to vote in favor of a House resolution condemning BDS.

Pressley defended her vote with the curious claim that she was standing “in solidarity with Jewish families.” At Mondoweiss Nada Elia wrote that Pressley’s excuse “added insult to injury, as it revealed an utter disregard for the Palestinian people—families too—whose ethnic cleansing was ongoing as she voted, as well as the many Jews, individuals and families, who fully support BDS.”

Pressley faced widespread backlash for the vote and the JI article details some of the local pressure aimed at the congresswoman. “We reached out, just expressing some disappointment [about the anti-BDS vote], and she actually responded [by] asking for a meeting,” IfNotNow volunteer Kayla Neumeyer told the website. “The communities that I’m in were also pretty disappointed in the vote. We saw it actually as not necessarily being aligned with her positions on the ability to boycott and free speech.”

Jewish Community Relations Council of Greater Boston’s Jeremy Burton told JI that this was a “severe disappointment” and lamented that pro-Israel groups organizations had lost Pressley.

“We have to have some self-respect in how we approach public officials who don’t show us a lot of respect.”

In May I spoke with Massachusetts activists who were challenging Senator Ed Markey over his support for Israel. “It has been incredible to see so much momentum building for the Palestinian liberation movement, and I’ve heard from many longtime organizers that they can’t imagine having this much support even 2 or 3 years ago,” Calla Walsh, a student who helped work to reelect Markey told me. “I certainly have not been paying attention to this issue for long enough, largely because I have always been told that it’s ‘too complicated’ for me to understand the history or take a position. I think that notion has been dispelled because many folks, especially young people like me, are realizing that no matter how complex the history of Palestine is, there is only one right side to take on an issue of apartheid and human rights abuses.”

Earlier this month, Palestine advocates held a rally in Boston and delivered a petition to representatives from Markey and Warren’s offices, demanding that the state end its complicity in Israel’s apartheid.

“We are not satisfied with small steps,” said BDS Boston member Lea Kayali at the event. “We are not standing here and talking to you for fun. We’re here because we wrote and signed this letter and we want you to listen to us. Meet our demands. Support the Boycott divestment and sanctions movement. Sanction Israel. Doing anything less is asking Palestinians to die quietly, and that, I promise you, we will never do.”