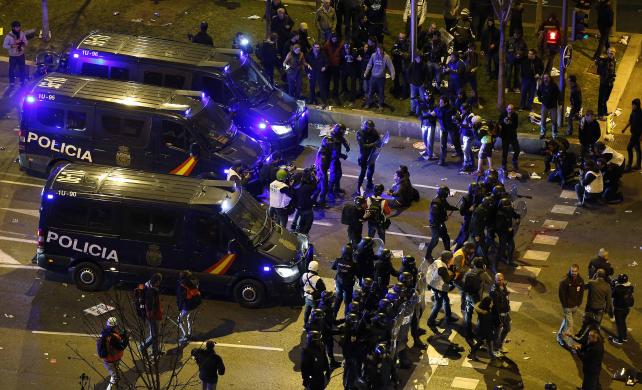 Above: Riot police confront protesters after disturbances broke out at the end of a demonstration which organisers have labelled the “Marches of Dignity” in Madrid, March 22, 2014. Tens of thousands of protesters from across Spain converged in Madrid on Saturday calling for an end to EU-imposed austerity which has deepened poverty amongst the worst-off. The so-called “Dignity Marches” brought tens of thousands to the capital, Reuters witnesses calculated, in support of more than 160 different causes – employment, housing, health and education and an end to poverty amongst them. REUTERS/Paul Hanna  (SPAIN – Tags: POLITICS CIVIL UNREST BUSINESS)

Hundreds of Thousands Join ‘March for Dignity’ Against Austerity in Madrid

(Reuters) – Hundreds of thousands of Spaniards rallied in Madrid on Saturday against poverty and EU-imposed austerity in a largely peaceful protest later marred by violent clashes in which police fired rubber bullets.

Some protesters started to throw stones and bottles at the large numbers of riot police present and attacked cashpoints and hoardings. The police fired rubber bullets to disperse them, according to video footage seen by Reuters.

Central government representative Cristina Cifuentes said 19 protesters had been arrested and 50 police officers had been injured, one of them very badly, in the clashes.

The so-called “Dignity Marches” brought hundreds of thousands to the capital, according to estimates of Reuters witnesses. Travelling from all over Spain, they were protesting in support of more than 160 different causes, including jobs, housing, health, education and an end to poverty.

Banners urged the conservative government not to pay its international debts and to tackle Spain’s chronically high unemployment of 26 percent.

“Bread, jobs and housing for everyone”, read one banner, “Corruption and robbery, Spain’s trademark,” said another.

The OECD says the economic crisis has hit Spain’s poor harder than in any other country in the group.

“For those who are in power we’re just numbers. They value money more than they value people,” he said, shouting to be heard above the din of chanting, whistling and drumming.

A housing bubble burst more than five years ago, forcing a 41-billion euro ($56 billion) bailout of Spain’s banks, squeezing homeowners and throwing millions out of work.

The government introduced public sector austerity to whittle down the deficit, provoking widespread anger amongst middle- and low-income families as dozens of cases of corruption in the ruling class are investigated by judges.

“(I’m here because) I’m sick of this system they call democracy,” said Jose Luis Arteaga, a 58-year-old teacher whose wage has been cut 20 percent. “I want things to change.”

No to pay the debt

Bread, work and shelter for all

We’re starting 2014 with no improvement for the workers, sunk in an unprecedented capitalist crisis and without any measures on the part of this illegitimate government other than misery, precariousness and repression, rulers who act as reall representatives of big banks, employers and big business, of capitalism, under the order of the Troika (the European Commission, the Central European Bank and the International Monetary Fund)..

We’re living in a situation in which every minute we’re being pushed to brink, a situation against which we must all start to give a real, collective, mass answer, by fighting from the grassroots, from our different territories but with one voice. Because with every day that goes by the situation is getting more agonizing, more difficult.

In the Spanish State there are hundreds of thousands of us who have lost our homes or who don’t receive benefits for dependents. There are more than 6 million of us without paid work and unemployed. We’ve got tens of thousands of working people without any unemployment benefits at all. There are more than a million of us who are living below the poverty line – and all that’s going down while the “Popular Party” continues with its cuts, destroying and robbing the health system, education, culture, pensions, closing down local television stations that are essential to the survival of minority languages and other public services. And they go on privatizing anything that’s profitable and giving tax benefits to the rich (bankers, big business, the Church, etc.)

There are more than 500,000 of us, young and not so young people, that have been forced to emigrate in order to try to eke out our living in one way or another. And despite this, they go on shutting down small and medium businesses with impunity, destroying most the real productive fabric, both industrial and agricultural, which could give work to the majority of the population.

In this context women have long had fewer rights: the right to live without male violence or to decide over our own bodies the right to family planning.

In our country if you were born somewhere else in the world, if your skin’s a different color or you have another religion, they take away your fundamental rights (healthcare, education et.) and can even shut you up in an Internment Center, even though you’ve committed no crime.

Simply for speaking our own minority language, simply for wanting to live in accordance with the culture of our land, we can be fined or even thrown into prison like during Franco’s fascist dictatorship, but now they call it democracy.

Fines and criminal penalties, imposed just for exercising the right of freedom of speech or the right to disobey unjust laws, are heavy, but the corrupt élite never go to prison and never have to pay for the damage they cause.

While the Government continues to hand out cash to big building firms, to the energy companies, to bankers and to corrupt businessmen etc. They’re leaving us with no work, no house, no health care, no pensions, no university grants, no schools, no education, no future: in a word no life.

They’re raising taxes, the price of energy and basic products for the poorest of use, while they’re reducing to a bare minimum employers’ social security contributions, to “create” work, they cynically say, and they turn a blind eye to massive fraud, corruption and capital flight. And without money we’re left with no house, no job and no wherewithal to survive.

Both the so-called Popular Party (PP) and the so-called Spanish Socialist Workers’ Party (PSOE) are the culprits. To reduce us to this situation they made the constitutional reform in 2011, a Treaty with the European Union and an Organic Law to guarantee payment of the debt and, if need be, to suppress any public institution (like the Statute of Autonomy of the Valencian Country), if it doesn’t reduce its debt (and so its provision of public services) whenever and however they want.

We fought with great sacrifice to gain our social rights and we’re just not prepared to lose them. We demand from politics the transformation of our economy to make it an economy at the service of humanity and to guarantee that these rights can be universally exercised.

That’s why we demand:

The abrogation of all the counter-reforms that have been forced down our throats (labor laws, laws affecting pensions, education the right to safe legal abortion, the 15/97 act which commoditizes health care, the law of civil repression etc).

A realistic plan against unemployment and a law establishing a basic income.

Stoppage of all evictions, the guarantee of the fundamental right to housing and to the basic utilities of water and energy.

Realistic and effective policies to ensure equal opportunities, regardless of a person’s origin, sexual orientation, gender identity, diversities or age.

A fiscal policy whereby those that have more, pay more and public social expenditure is guaranteed above everything else.

A guarantee of the right to decide, in all spheres, as persons, workers, peoples. Because we demand real democracy.

In order to advance in the construction of unity and people’s power … we must advance in the Marches for Dignity so we can arrive in Madrid on March 22 from all cardinal points of the Spanish State!

We want to live and work with dignity in our land with our people!

To defend all that is and should be ours, struggle is the only way!

Bread, a roof, rights and dignity for all workers.