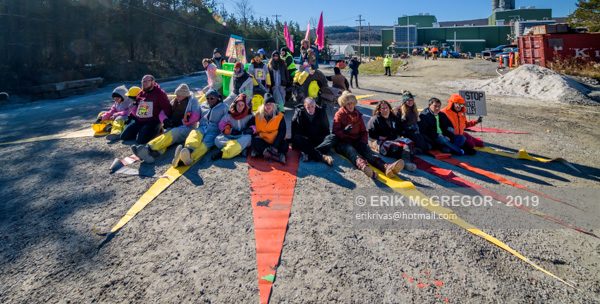 Above Photo: Impacted residents and supporters from across the Northeast, including local farmers, used a tractor blockade and climbed a 275ft tall smokestack to halt construction of the Cricket Valley fracked gas power plant on November 6, 2019, citing the plant’s large contribution to climate change and local air pollution, they are calling on Governor Cuomo to shut down the fracked gas power plant for good. (Photo by Erik McGregor)

Wingdale, NY – Impacted residents and supporters from across the Northeast, including local farmers, used a tractor blockade and climbed a 275ft tall smokestack halting construction of the Cricket Valley fracked gas power plant for a day on November 6, 2019, citing the plant’s large contribution to climate change and local air pollution, they are calling on Governor Cuomo to shut down the fracked gas power plant for good.

The Cricket Valley fracked gas power plant was forced to completely stop operations for the day resulting in 29 activists arrested, 25 of them used a tractor rigged with hardlock devices and chain themselves to it, blocking the entrance to the plant while 4 of them climbed the 275ft tall smokestack dropping a banner with the letter “R” to symbolize resistance.

“Our valley has a lot of important resources, everything from our children, an elementary, middle and high school, to some of the largest freshwater deposits in New York State and our local farms, all which need clean air to survive and thrive,” said local farmer Ben Schwartz and one of the four people who climbed the smokestack.

Construction of the 1,100 megawatt fracked gas power plant, one of the largest in the Northeast, is nearing completion and once up and running would cover the local community in 279 tons of nitrogen oxides, 570 tons of carbon monoxide, and more than 60 tons of sulfuric acid pollution. Local residents are particularly concerned that its location in the Harlem Valley, a narrow north-south corridor, will engulf the region with pollution. It will also emit 6 million tons of greenhouse gasses.

“New York State has taken a climate leadership position via the CLCPA by mandating that New York State reach net-zero GHG emissions by 2040. But right now the CLCPA is just a piece of paper, waiting to be turned into reality,” said Bill Kish, Stop Cricket Valley. “Bringing new fossil fuel plants like Cricket Valley online now makes no sense and only sets New York further back, reducing the likelihood that we’ll meet our ambitious goals while damaging our community’s health and our already stressed ecosystems.”

The plant is located close to the Connecticut border and residents there are also very concerned about the fracked gas pollution. The Connecticut residents had no say in the approval of the plant and now are forced to monitor their own air quality.

“As a Connecticut resident, I am very upset about Cricket Valley Energy Center. The pollutants released in the air will travel into New Milford and be trapped due to topography,” said Cindy Davis, Western Connecticut Clean Air Action. “The pollutants released contain detrimental chemicals contributing to asthma, birth defects and other health problems. The plant was already approved and in construction when Connecticut residents learned about the plant.”

The shutdown was followed by a family friendly rally calling on Governor Cuomo to shut the plant down for good.

This is the perfect opportunity for Governor Cuomo to be a true climate hero. Cricket Valley was proposed before the science on fracking and the environment was clear,” said Jess Mullen, Coordinator of New Paltz Climate Action Coalition. “However, it’s clear now. With the recent Climate Leadership and Community Protection Act, Cuomo has voiced desire to take the climate emergency seriously. Shutting down Cricket Valley will be the determining factor of the legacy he will leave.”