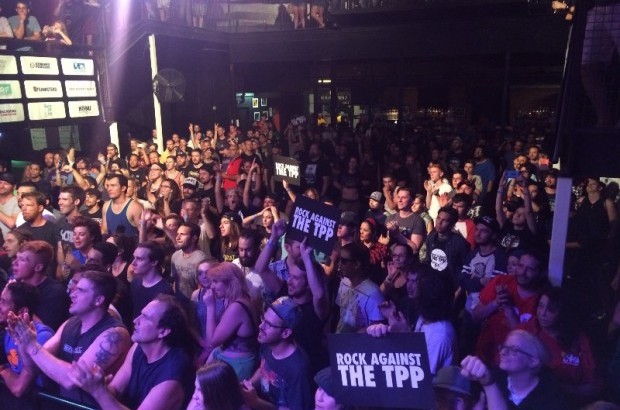 At Rock Against TPP Tour Kick-Off In Denver

A huge crowd of music fans and activists from across the political spectrum came together last night in Denver for the kick-of of the Rock Against the TPP tour to sound the alarm about the toxic Trans-Pacific Partnership deal.

Tom Morello, legendary guitarist of Prophets of Rage, Rage Against the Machine, and Audioslave, was our headliner for the night.

The show featured an all-star lineup, hosted by actress Evangeline Lilly with performances from Anti-Flag, the Flobots, Downtown Boys, and more.

Buzzworthy bilingual rockers Downtown Boys had the crowd in a frenzy.

Ahead of the concert, we held a rally outside the venue on an awesome truck with a stage that the Teamsters provided. Tom Morello addressed the excited crowd.

The talented MCs of Platinum-selling Denver hip-hop group the Flobots lead some great chants. “You down with TPP? Hell no not me!”

Jonny 5 of the Flobots addressing a large crowd gathered outside Summit Music Hall, well before doors opened. The crowd swelled to over 1,000 by the concert’s start.

The Flobots and Anti-Flag lead the crowd in this epic finale for the rally before folks headed inside.

We flew a giant 25 foot Anti-TPP protest blimp over the venue ahead of the rally to make our message clear.

The blimp was pretty hard to miss.

It was also a bit tricky to get in the air. But it was worth it.

The day after the concert we held a teach-in, hosted by Evangeline Lilly, where people who had just learned about the TPP through the concert could get more information and plug in with local groups working to stop it.

Fight for the Future campaign director Evan Greer joined Tom Morello and friends for the finale of the show.

Please check back soon for more photos and videos. We are still gathering them from our many volunteer event photographers. These are all available for use by press, credit “Courtesy: Fight for the Future.”
For press inquiries, contact: press@fightforthefuture.org or 978–852–6457
For background on the Rock Against the TPP tour, see: https://www.fightforthefuture.org/news/2016-07-21-today-musicians-and-celebrities-kick-off/