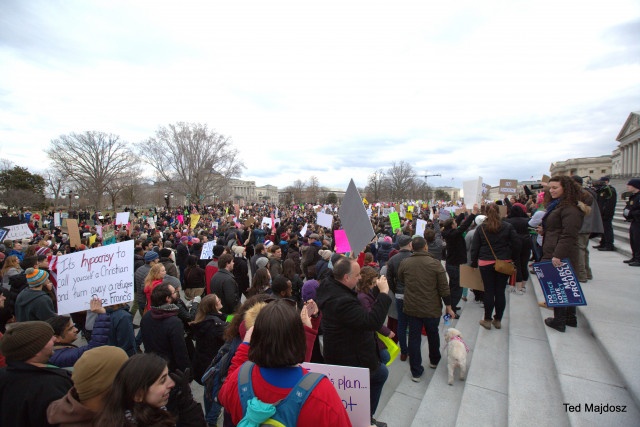 Above photo: By Ted Majdosz on SmugMug.

Tens of thousands of protesters converged on the White House on Jan. 29 to denounce President Donald Trump’s executive order restricting residents from seven Muslim-dominant countries from entering the U.S.

The huge rally occurred one day after spontaneous rallies broke out at U.S. airports as U.S. Customs and Border Protection agents began enforcing Trump’s directive. Protests at U.S. airports carried over to Sunday, including rallies at Dulles and Baltimore-Washington International Airports.

Trump’s order bars admission of Syrian refugees and suspends travel to the United States by nationals from Iraq, Iran, Sudan and four other countries, even if the residents hold valid visas or permanent residence permits. People subject to the ban include dual nationals born in one of the seven countries who also hold passports from countries not on the list.

Federal courts in New York, Massachusetts, Virginia and Washington issued stays against the order and subsequent detentions of those coming into the country on Jan. 28, but U.S. Customs and Border Protection, an agency of the Department of Homeland Security, was not fully complying.

“What’s important about this protest is that it’s focused around an issue that a lot of us have been fighting for a long time,” journalist and activist Max Blumenthal said in an interview. “We’ve seen a continuum of anti-immigrant and specifically anti-Muslim and anti-Arab politics from every administration going back to Reagan.”

After rallying at the White House for more than an hour, protesters began an impromptu march down Pennsylvania Avenue to the U.S. Capitol. Hundreds of protesters stopped at the Trump International Hotel to express their opposition to the president’s immigration policies, including his plans to build a wall along the U.S.-Mexico border.

Dozens broke through a barrier in front of the hotel and stood on the front steps chanting opposition to the new administration.  Like the massive Women’s March on Washington a week earlier, police were largely absent from the huge convergence on the White House and Pennsylvania Avenue.

Protesters carried handmade signs with a wide variety of anti-Trump messages and calls for the U.S. government to liberalize its immigration policy and allow more refugees. 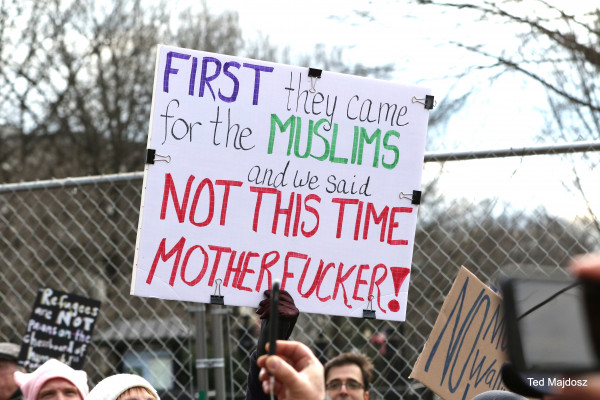