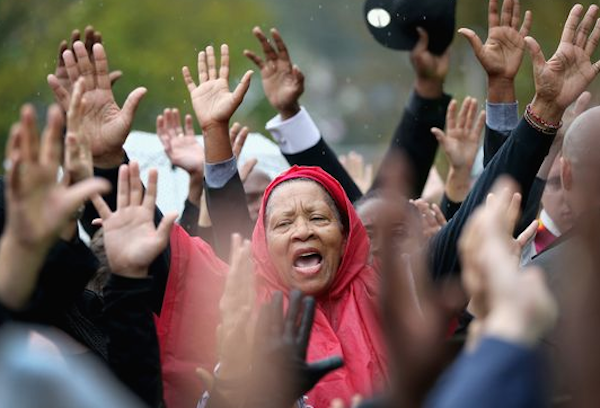 Massive Demonstration At St Louis U. For Brown And Myers

Thousands gathered at SLU to protest killings by police. The Free Thought Project’s Cassandra Rules, recounts the events of Sunday night’s massive protest during the ‘Weekend of Resistance’ in St. Louis.

St Louis, MO — On Sunday’s action for the Ferguson October Weekend of Resistance, demonstrators gathered at the site of the killing of VonDerrit Myers for another very secretive act of civil disobedience.

When protesters arrived in the area, police had once again set up check points at all side streets leading to the location.  Non residents were not permitted to enter, and residents were forced to provide identification to be able to get to their homes.

At the memorial site there were at least two hundred people when we arrived around 1 am.  We came to learn that we were in Group 2 with the Myers family, and that another group had already set off marching.

We kept to the side walks and marched quietly to make sure we could peacefully make it to our destination, although none of us had any idea where that was.

After a brief run through a field we met up with group one and joined to form a large group that was easily over a thousand.

Despite having stayed on the sidewalks and marching peacefully- just before our destination we were met by riot police blocking both the street and the sidewalk.

After a bit of a delay while NLG Legal Observers spoke with the thug cops, they eventually moved to the side and let us pass.

At this point we still weren’t quite sure where we were heading, but continued on none the less, soon arriving at St. Louis University.

The crowd began to chant “out of the dorms and into the streets” and we marched through the campus.

Once everyone was in the common area the father of VonDerrick Myers took the bullhorn to speak on how thankful he is for everyone and how the protests have been keeping him going.  This was followed by four minutes of silence to represent the four days since he was killed.

The next speaker on the bullhorn let us know why we were there.

“I bet you all are wondering when this civil disobedience is happening… We are not going anywhere. This is a sit in.”

Many protestors dispersed after the speakers, but a decent crowd remained as “#OccupySLU” trended at #1 on twitter in the USA as of 04:24 AM CDT.
Read more at http://thefreethoughtproject.com/demonstrators-occupying-st-louis-university-mike-brown-vonderrit-myers/#cPTTGW1KXK8xsLWJ.99