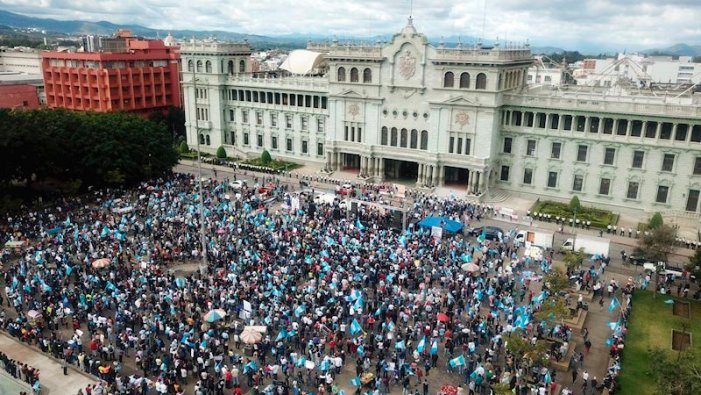 Massive Protests In Guatemala Against President And The Congress

Thousands of Guatemalans demonstrated this Saturday in front of the National Palace of Culture, the seat of the national government in the center of Guatemala City, to express their rejection of the government of President Alejandro Giammattei and the Congress of the Republic.

At least 10,000 people rallied in the central square of the country’s capital, in front of the seat of government, to express their dissatisfaction after 10 months of President Alejandro Giammattei’s administration and the approval of the 2021 budget — the largest budget in the country’s history. These latest events are part of rising discontent in the country in response to the policies of Giammeattei’s government and the right-wing party he represents, Vamos, as well as the deteriorating economic situation in Guatemala, which has been devastated by the pandemic and back-to-back hurricanes this fall.

By all accounts, this budget is a massive insult to the working class and poor of Guatemala. Despite being the largest budget in the country’s history, it slashes funding for both education and healthcare, leaving hospitals ill-equipped to handle the pandemic. With thousands of people going hungry and homeless throughout the country as a result of years of austerity and the government’s more recent negligence in response to Hurricanes Eta and Iota this year, the budget proposed to cut funding to combat malnutrition. It also slashed the budgets of the judiciary, which oversees government corruption cases.

Yet this plan gave no shortage of funds to politicians and the capitalist interests they serve. While thousands of people starve across the country, politicians negotiated an extra $65,000 to fund their own meal budgets. Further, the budgets of the nation’s Departmental Development Councils (CDC), bodies which are run by governors and mayors without significant oversight, were nearly doubled. Of the almost $100 billion Quetzals of the total budget (some $13 billion), the budget for the CDC accounts for nearly $4 billion. Many analysts claim that this was negotiated by mayors and governors in exchange for a rushed approval of the budget.

Saturday’s demonstration was called by artists, activists, and political organizations to denounce the passing of the 2021 national budget last week. This followed weeks of outrage over secret budget negotiations which forced the government to amend certain parts of the plan. In spite of the widespread unpopularity of the budget, however, the Congress rushed to approve it early Wednesday morning — without all 160 representatives even having seen the full document.

As protesters demonstrated in the central plaza, a small group of people broke into the Congress building and set it on fire. Several Guatemalan news outlets report that the events occurred without interference by the National Civil Police (PNC) — which only intervened after the fact to fire tear gas and disperse the crowd — leading to reports that the incident was actually caused by police infiltrators.

Most of the slogans chanted by the demonstrators in the center of Guatemala City denounced Giammattei as well as the president of the Congress, Allan Rodriguez, who belongs to the same political party as the president. But the demonstrators are protesting much more than just this administration. As one protester told Al Jazeera, “We are tired of so much theft. I don’t want my kids and my grandkids to live in such an indebted country.”

Student groups are playing a central role in the demonstrations against the budget. They are protesting against these austerity measures and against what they see as a corrupt government taking action behind the backs of the people.

President Giammattei reacted to the demonstrations on social media, writing that “one has the right to demonstrate according to the law” but “we cannot allow vandalism of public or private property.” He said that “criminal acts” taken during the protests would be “be punished with the full force of the law.”

With the three powers of the State infested with corruption and bent on the interests of parallel groups of power, there is no possibility of justice nor of combating corruption and impunity, other than protest and social resistance, under the protection of Article 45 of the Constitution.

Further, on Friday night, after Giammattei announced his intention to pass the budget, his vice president, Guillermo Castillo, said in a press conference that the country is not “well” and urged Giammattei to resign jointly for “the well-being” of the Central American nation. The disagreements between the president and his vice president have deepened since they took office 10 months ago, mostly in relation to Giammattei’s use of the presidency to further his own business interests. Despite the calls in the streets, so far Giammattei is refusing to step down.

The thousands of people in the streets of Guatemala City and other cities across Guatemala this weekend show that they will not let the government slash social spending to line their own pockets. They will not allow the government to make them pay for the pandemic, natural disasters, or a deepening economic crisis. They will not go hungry as politicians bolster capitalist profits. As one protester stated: “I think this is just the beginning.”