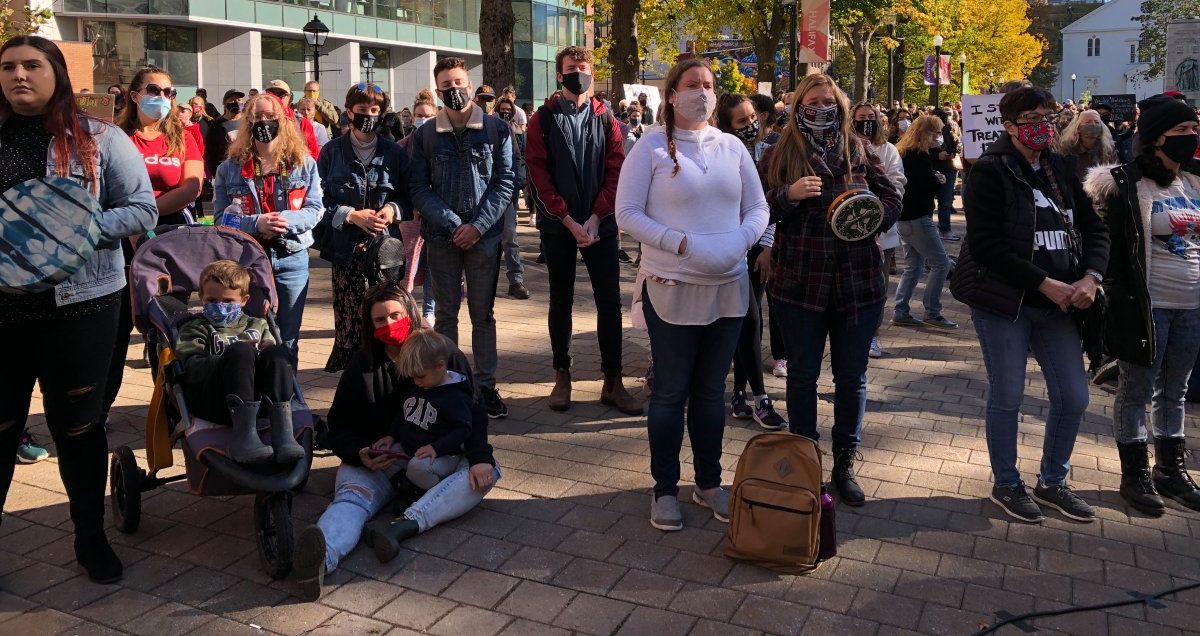 Above photo: About a thousand people rallied in Halifax’s Grand Parade on Oct. 18, 2020, to show their support for Mi’kmaq harvesters exercising their treaty rights on Nova Scotia’s southwestern shore. Elizabeth McSheffrey/Global News.

Halifax, Nova Scotia – About a thousand people gathered in Grand Parade on Sunday, singing, drumming and voicing their support for Indigenous harvesters on Nova Scotia’s southwestern shore, who are exercising their right to fish — outside the commercial season.

It’s an assertion of treaty, constitution and court-protected rights that has cost Sipekne’katik fishers dearly since their launch of a moderate livelihood fishery in mid-September. This week, they were the target of assault, arson, vandalism, threats and intimidation.

“Our nation is in danger, the racism is thriving throughout Mi’kma’ki and the true colours are being shown,” said speaker Kyra Gilbert, a Mi’kmaw activist.

The Mi’kmaw’s right to fish for a “moderate livelihood” is enshrined in a two-decade old Supreme Court of Canada ruling called the “Marshall decision.” But in the 20 years since its passing, the federal government has failed to establish what a moderate livelihood means.

The region’s commercial fishers have objected to the Sipekne’katik First Nation taking the fishery into their own hands, arguing that all harvesters should be subject to the same seasonal restrictions.

Last week, however, some in that group used violence to make their opposition to the Indigenous fishery known.

On Tuesday, commercial fishers swarmed, vandalized and ransacked a lobster pound in Middle West Pubnico that was being used by Indigenous fishers to store their lobster catch. Several Sipekne’katik fishers were forced to take cover inside as the building’s windows were smashed out and a vehicle was damaged.

The next day, commercial fishers stopped journalists from speaking with Sipekne’katik Chief Michael Sack at a scheduled press conference in New Edinburgh. Sack was later assaulted at the same location — an incident that has since resulted in charges.

Early on Saturday, the Middle West Pubnico lobster pound was set ablaze, resulting in life-threatening injuries to someone Nova Scotia RCMP have identified as a “person of interest.” Charges have yet to be laid in that case.

“You have seen the blatant racism, and why?” asked Sipekne’katik First Nation member Lisa Googoo at the rally on Sunday.

Sack is currently in nation-to-nation negotiations with federal Fisheries Minister Bernadette Jordan, who is in Nova Scotia self-isolating after returning from Ottawa. She has declined interviews with Global News for the past week, but has issued several statements condemning all acts of violence against the Mi’kmaw, and reiterating their treaty right to fish.

In an interview on Saturday, Indigenous Services Canada Minister Marc Miller said this crisis cannot be solved by tweets or statements, but negotiations must take place behind closed doors to respect the privacy and trust of those at the other side of the table.

“We find ourselves in a historic situation where we are catching up with court cases that have affirmed those rights… Historically, if you look at those cases, they’ve been denied,” he told Global News. “Indigenous peoples have shown extreme courage in standing up for their rights.”