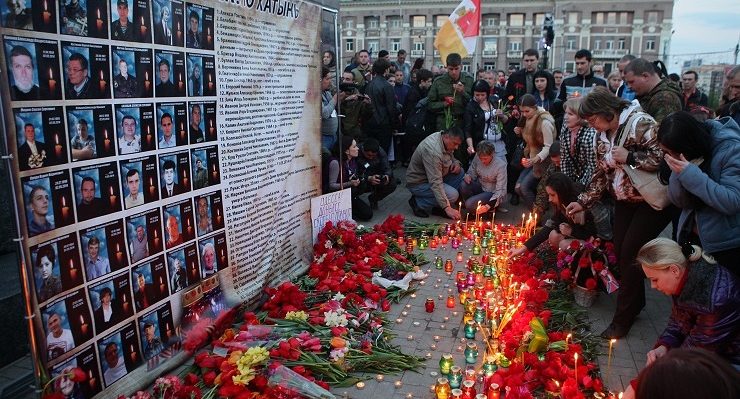 May 2: International Solidarity With The People Of Odessa

NO to Fascism! NO to NATO! YES to a Multipolar World based on Cooperation, not Confrontation!

Now more than ever, in light of the escalating military and political confrontation between Western powers and the Russian Federation and its allies, we must remember what has led to the current crisis.

On May 2, 2014, an event happened in Odessa, Ukraine, that has been called one of the worst civil disturbances in Europe since World War II. A right-wing mob led by openly neo-Nazi organizations chased a much smaller group of progressives into the city’s House of Trade Unions and then set the building on fire. At least 42 people died from the flames and smoke inhalation or by being beaten to death as they tried to escape the burning building. To this day, not one of the perpetrators has been punished, even though the attack was documented by scores of people who posted videos of the event online.

This Odessa Massacre occurred just a few months after the violent right-wing coup that overthrew the elected president of Ukraine with support from Western powers, especially the United States. Since then, the country as a whole has increasingly been used as a pawn in the U.S./NATO strategy to militarily, politically and diplomatically isolate Russia, while the neo-Nazi organizations that participated in the coup have grown in numbers and financial backing. Today, videos of horrendous abuses committed against minorities, pro-Russian people and Russian POWs can be seen online.

All this is part of an ongoing and increasingly aggressive campaign by the U.S. government and its allies against progressive movements and governments around the globe. It is part of a desperate attempt to slow the development of a multipolar world based on cooperation instead of confrontation. This destructive policy of military intervention and illegal “regime change” has led to a military confrontation with Russia that could trigger a new World War. Meanwhile, the Ukrainian government has banned 11 political parties, taken control of the country’s television stations and arrested journalists and leftists, all while ignoring the increasingly frequent violent attacks by neo-Nazis against anyone they view as not sufficiently nationalistic.

We must confront all this with acts of international solidarity. Every year on May 2, the courageous people of Odessa come out to the House of Trade Unions, where they display pictures of those who died there, lay red roses and release black balloons as symbols of mourning. And every year they renew their call for an international investigation of the massacre, something the Ukrainian government has never allowed. And they do this despite the ever-present threat of being attacked by the neo-Nazis, who have taken to mark the day with mass marches in the city.

Also on May 2, antifascists in other countries hold actions in solidarity with the people of Odessa and in support of their demand for an international investigation. In 2021, more than 20 cities participated across Europe and North America. These actions not only let the people of Odessa know that they are not alone, they also help inform people in other countries about the 2014 coup, the role of the neo-Nazi organizations and the true character of the Ukrainian government, which is portrayed in the West as a “struggling democracy” and not the right-wing pawn of the West that it really is. And in holding these actions, antifascists in many different countries help build ties of solidarity among themselves, a sorely needed development in this divided world.

The Odessa Solidarity Campaign was founded in 2016 to support the antifascist people of Odessa. Now, In cooperation with the Union of Political Emigrants & Political Prisoners of Ukraine and the Coop Anti-War Cafe in Berlin, the OSC is appealing to antifascist forces throughout the world to commit to holding a local event on May 2, 2022. This could be a public meeting, a rally, a march or even just a few people holding red roses, black balloons and signs declaring solidarity with Odessa. The number of participants is less important than the number of events, because we are trying to show that people in many countries are aware of what happened in Odessa in 2014 and are still demanding an international investigation. This is especially important now in light of the ongoing military confrontation in Ukraine which is confusing many people in the progressive movements.

If your organization is willing to commit to holding some kind of action on May 2, please send the name of your organization, your contact information and the name of the city where the action will take place and, if possible, any details about the action, to the Odessa Solidarity Campaign at DefendersFJE@hotmail.com. You can also email the campaign at this address with any questions, comments or suggestions.

For a World Free from War & Fascism,