Ever since November 8, 2016, when Donald Trump was elected, Thania Hussain has gone to nearly every protest organized in New York City. Wednesday night in Washington Square Park was no different. Hussain, an undergraduate student at Fordham University, was one of thousands of people who came to take part in a protest organized by Muslim groups in response to President Donald Trump’s proposed de facto ban on Muslims entering the United States.

“Every time I come out [to protests] I see the same sentiments,” Hussain told me in an interview following the event. “Everyone wants social justice and equality for all. People don’t care if you have a headscarf. It’s wonderful.” She’s not part of the Council on American Islamic Relations (CAIR), the lead organization that called for the evening’s demonstration. “But I want to be, that’s why I’m here tonight,” she says. “Right now I’m just an undergrad fighting for justice.”

Hussain and the friends who joined her are exactly the kinds of people CAIR, the New York Civil Liberties Union, and the more than a half dozen other organizations that cosponsored the rally are trying to engage. “If you are in a movement and you aren’t following a woman of color, you’re in the wrong movement,” Linda Sarsour, one of the organizers behind the Women’s March in Washington, DC, last Saturday, told the assembled crowd. She also warned elected Democrats that if they collaborate with Trump, they will face primaries in 2018. “Keep your eyes on the prize,” she said. “We’re gonna Tea Party them.” 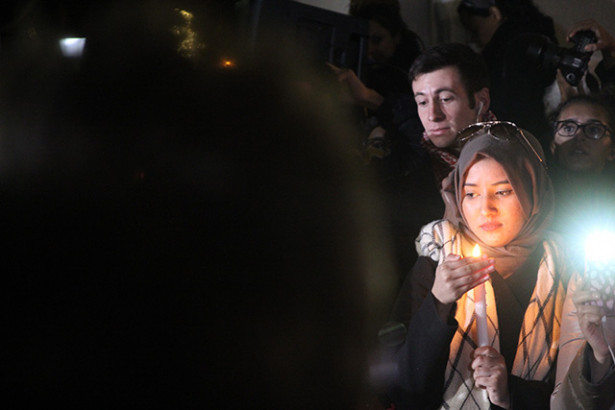 The rally was organized following the news that Donald Trump was imminently preparing to sign an executive order to implement a travel ban that would prevent citizens of Syria, Iraq, Libya, Sudan, Iran, Somalia and Yemen from entering the United States for at least 30 days. The order also seeks to bar all refugees from entering the country for 120 days and indefinitely bar Syrian refugees. Trump disingenuously denied his order was a Muslim ban in an ABC interview Wednesday night, though he confirmed that he would sign the order shortly.

In addition to expressing fears that Muslims will be targeted, many at the demonstration criticized two executive orders Trump signed Wednesday afternoon that lay the legal foundation for his immigration policy, which promises to be the most explicitly anti-immigrant in recent memory. One order begins the process of expanding a southern border wall, and the other paves the way for a possible ban on federal funds going to sanctuary cities — that is, cities and counties that refuse to comply with federal immigration laws to varying degrees. The order also empowers federal law enforcement to deputize local and state cops to serve as immigration enforcement under a program known as 287(g), which appeared on a wish list circulated by a police advocacy group before Trump’s inauguration. Across the country, mayors of sanctuary cities denied that Trump had the constitutional powers he was attempting to exercise and vowed to oppose him.

It is not unusual for a new administration to issue executive orders — Obama barred torture and called for the closure of Guantánamo in his first days in office — and Trump’s willingness to follow through on his promises suggests his presidency will be every bit as extreme, discriminatory and bigoted as his campaign.

Following the attacks in Paris in 2015, virtually every Republican running in the primary voiced support for some sort of Muslim ban. Trump never let the issue go, though he did morph it into an anodyne-sounding policy called “extreme vetting.” Obfuscatory language aside, the policy will be a Muslim ban in all but name, and could presumably be extended indefinitely — or at least until blocked by a court.

The seven Muslim-majority countries are not named explicitly in the order. Rather, the list is derived from State Department-designated state sponsors of terror and areas the Department of Homeland Security lists as countries of concern. The list could grow, too. The order calls for the Department of Homeland Security, in cooperation with State and the Director of National Intelligence, to review visa requirements for nationals from non-NATO countries. After that study is complete, countries would have 60 days to provide additional information about their visa applicants or risk being denied entry to the United States.

A waiver included in the order provides further evidence that Trump is targeting Muslims, rather than all people from designated areas. Once the refugee program is resumed after the 120-day period, the Department of Homeland Security is directed to “prioritize refugee claims made by individuals on the basis of religious-based persecution, provided that the religion of the individual is a minority religion in the individual’s country of nationality.” Being a member of a minority — due to religion, ethnicity, sexual identity, or gender expression — is often a factor in determining asylum priority, but in this case, the language is a thinly veiled acknowledgement that Christians from the Middle East will be given preferred refugee status. 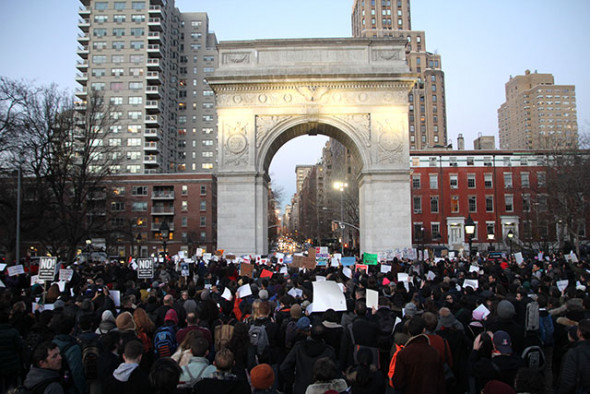 In a reflection both of the diversity of New York City and the current emphasis on intersectionality in organizing, all of the speakers at Wednesday’s rally emphasized how their struggles, and their emancipation, are inextricably interconnected. Rama Issa-Ibrahim, from the NYC Commission on Human Rights, told the crowd how Trump’s orders will have an immediate impact on her life. “I am Syrian. I am an American. I am an immigrant,” she said. “My father is still in Syria, and I have friends all across Europe. This issue is deeply personal to me.”

In addition to the Muslim and immigration groups who spoke, several members of the New York City council addressed the crowd, promising to keep New York City a sanctuary city even if that means operating without federal funding. “We will not pass a budget that includes federal money if it will kick immigrants out,” said NYC council member Helen Rosenthal. “We are prepared to run this city without federal dollars if that’s what it takes.”

Letitia James, a public advocate for New York City, called on the crowd to stand in opposition to Trump’s anti-immigrant, anti-Muslim policies. “When you see a government that is lawless, you have an obligation to resist,” James told the crowd. “We have to protect those they are coming after.”

Beyond the 2018 primaries and public agitation, the courts are one of the clearest venues through which to oppose Trump. Tarek Ismail, a lawyer with the Creating Law Enforcement Accountability & Responsibility (CLEAR) Project at CUNY, provides legal representation for Muslims, Arabs and South Asians who have been spied on or arrested, particularly in a national security or counterterrorism investigation. “We know all too well what it means to be watched,” Ismail told the crowd. “We’ve only been around since 2009, which means we’ve only been here for the Obama administration, and we’ve been busy.” His remark was met with silence. “That might not be popular, but it’s true,” he said.