Above Photo: From Bbc.com

UberEats riders and a small number of workers from JD Wetherspoon, McDonald’s and TGI Fridays have been staging walkouts in a pay dispute.

Protests were being held in several UK cities, along with a rally in London.

The industrial action was organised in tandem with strikes by fast-food workers on four continents.

UberEats, JD Wetherspoon, TGI Friday’s and McDonald’s have all defended their record on pay.

Mr McDonnell said: “Our message to exploitative employers is that we are coming for you.”

Separately, about 50 UberEats couriers, Uber drivers and supporters temporarily occupied the lobby of Uber’s London headquarters, in a protest supported by the Independent Workers Union of Great Britain (IWGB) and the Industrial Workers of the World (IWW).

What are the workers striking about?

UberEats workers want to be paid £5 per delivery and a further £1 per mile for each delivery.

These latest strikes follow a series of walkouts by UberEats drivers last month sparked by the company reducing its minimum payment per delivery from £4.26 to £3.50.

UberEats defended its pay scheme, arguing that the majority of its couriers used delivery work to supplement existing incomes.

“Last week couriers using our app in cities across the UK took home an average of £9-10 per hour during mealtimes, with many also using other delivery apps,” the firm said in a statement. 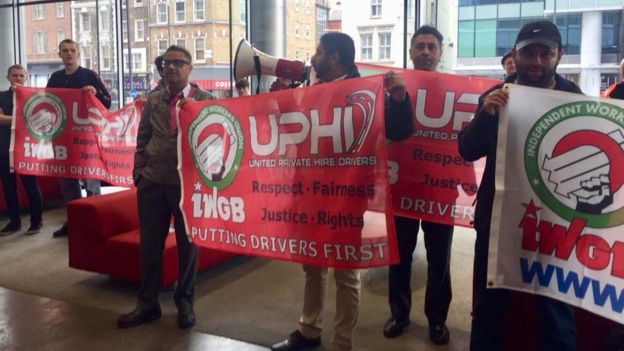 “The fact that UberEats drivers have decided to strike on the same day as us shows that low pay is an issue that affects people across the industry,” said a spokesman from the Bakers, Food and Allied Workers Union (BFAWU).

Workers at JD Wetherspoon, McDonald’s and TGI Fridays want to be paid £10 an hour.

McDonald’s denied support for the union among its staff was increasing. “All restaurants remain open as usual today despite frustrating attempts by protestors at a handful of locations to [have an] impact [on] our customers, and our restaurant teams,” a spokeswoman said.

JD Wetherspoon has previously said it had announced pay rises worth £20m last year and £27m for this year.

TGI Fridays said all its team members were paid at or above the national minimum wage hourly rate, while pay rates were regularly reviewed. It added that its workers were also allowed to keep all tips they received. 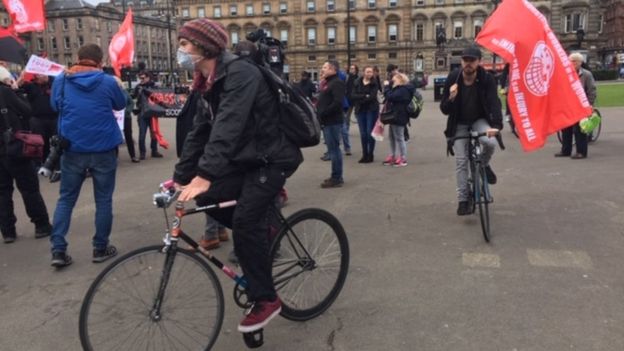 What do union leaders say?

Ms O’Grady of the TUC told the BBC’s Today programme that the strike was “small but growing”.

She said some modern hospitality employers and technology firms were “using a very old form of exploitation”: “We need the public and communities to support us. We are seeing growing public concern.”

The companies in question could “and should” afford to award a pay rise, Ms O’Grady added.

Which places are affected?

Strikes by UberEats drivers are taking place in London, Bristol, Brighton, Newcastle, Plymouth, Southampton, Glasgow and Cardiff, according to the IWW union.

Workers at two Wetherspoon pubs in Brighton were expected to strike, the BFAWU said. 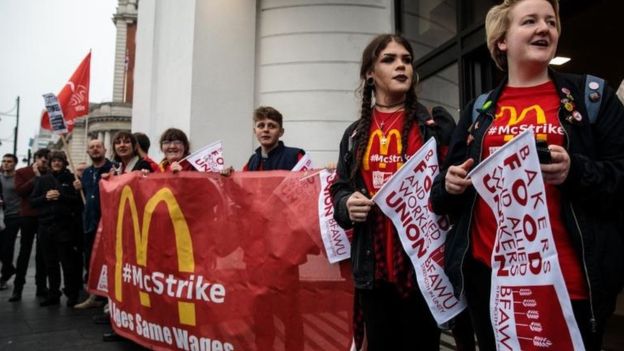 They were being joined by workers from McDonald’s outlets in London, Cambridge and Watford, and TGI Fridays staff in Milton Keynes and two London branches.

The strikes are being held to coincide with industrial action over pay by fast-food workers in Chile, Colombia, the US, Belgium, Italy, Germany, the Philippines and Japan.