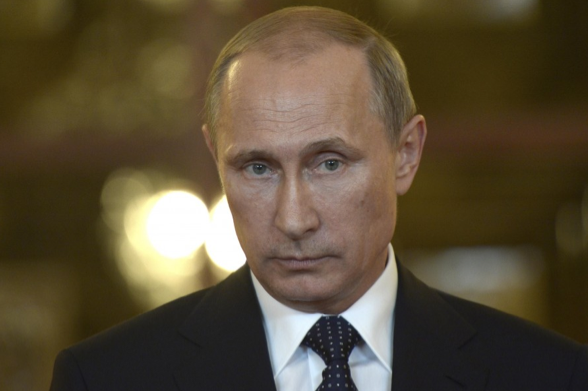 Think that Red Square could eventually go the way of Kiev’s Maidan? Not if the Kremlin has anything to say about it.

Protesting on the streets of Moscow — or any other part of Russia, for that matter — will now not only cost a pretty penny, but also could land you behind bars, after Russian President Vladimir Putin on Tuesday signed a law into effect criminalizing repeated street protests.

The law was one of a few measures Putin signed that are expected to increase the Russian government’s ability to control public discourse and the free exchange of information.

There was never really any question that Putin would endorse the measures, which have been going through the lawmaking process for months. But he made the measures official on a day when he also convened the Russian Security Council to discuss threats to the territorial integrity of the country, and at a time when international scrutiny is focused on what role Russia may or may not have played in the Ukrainian crisis that led to the shooting down of a Malaysia Airlines jet.

“Ever more frequently today we hear of ultimatums and sanctions … undesirable regimes, countries that conduct an independent policy or that simply stand in the way of somebody’s interests get destabilized,” Putin said Tuesday at the Russian Security Council meeting, adding that civil pro-democracy movements, such as the color revolutions of the past decade, were “in simple terms, takeovers instigated and financed from the outside.”

“Such methods will not work with Russia,” Putin went on. “The recipes used regarding weaker states fraught with internal conflict will not work with us. Our people, the citizens of Russia, will not let this happen and will never accept this.”

Russia has in recent memory not been quite as united as Putin’s statement suggests. In late 2011, protesters calling for free and fair elections came out in droves for large-scale rallies that continued into the new year. After Putin was reelected president in 2012, demonstrators gathered in Moscow’s Bolotnaya Square on the eve of his inauguration to protest his victory.

Since then, Russia has taken various steps to neuter the opposition. Laws were passed to limit and institute fines for protests, and leaders such as Alexei Navalny were put under house arrest or sent to prison.

In an interview Monday with Lenta.ru, Russian Investigative Committee spokesman Vladimir Markin congratulated the government on those moves — and credited them with helping Moscow avoid the sort of anti-government movement that rocked Kiev earlier this year.

“Our Ukrainian neighbors have shown to us a very good example of neglect by a state of legal culture and civilian norms — and that’s the result of it,” Markin said. “It’s clear to everyone that the police on Bolotnaya Square, investigators and operatives protected not only the state, but also the people from the most serious disasters.”

Under the new laws, protesters found guilty of “holding meetings, rallies, demonstrations, marches and pickets” multiple times during a six-month period will be eligible for a panoply of penalties, including fines ranging from 600,000 to 1 million rubles ($17,124 to $28,540) or two years of salary and up to five years of forced labor or prison.

Putin also signed a law to increase prison time for people who publicly call for anything that might “violate the territorial integrity of the Russian Federation.” Individuals can now receive up to four years in prison, instead of three, while appeals made via media and the Internet can bring about a five-year prison term.

Putin also signed a widely discussed law that will force any Internet company hoping to operate in Russia to store Russian clients’ personal data inside the country.

But Putin made a point of saying Tuesday that he had no intention of “cracking down” to thwart forces that threaten “the unity of our country.”

“We will not do that under any circumstances,” he said.

Nikolai Patrushev, a member of the Russian Security Council who took over from Putin as head of  Russia’s Federal Security Service and served there until 2008, told reporters Tuesday that the opposition had an important place in Russia.

But Russian opposition leaders seem pretty certain that no matter what Kremlin officials say, they’ll do the opposite.

“The Russian authorities are planning to rely on civil society, there will be no crackdown,” read a tweet from Navalny’s account Tuesday. “Now we’ll all go to jail.”