“Americans should not have to choose between producing food and having healthy clean water.”

The meat industry, more specifically corporate giants such as Tyson foods, has been directly linked to the environmental catastrophe know as the toxic dead zone.

Corporations that are a part of the meat industry use industrial-scale agriculture to raise their animals, which is the number one source of water pollution in the country. Even though there are better solutions available to minimize the impacts on the environment, corporations continue to use resource-intensive and ecologically destructive practices. This pollution has lead to toxic “dead zones”, which are areas where there is no longer enough oxygen for fish to survive. The largest dead zone in the United States is in the Gulf of Mexico.

America currently houses five times as many livestock animals as humans. More than a third of America’s agricultural land is dedicated for the production of corn and soy, key ingredients in animal feed products. American humans only consume 10 percent of that which is produced.

A new campaign launched by Mighty Earth is aiming to expose Tyson’s role in the process of livestock feed production that causes major pollution – and hold them accountable for it.

The group states, “Much of this pollution comes from the vast quantities of corn and soy used to raise meat animals, and has caused one of the largest Dead Zones on record in the Gulf of Mexico this year.”

According to Mighty Earth, only a very small number of large and powerful corporations control livestock feed production, making huge profits while creating massive downstream pollution. These companies are ADM, Bunge, and Cargill.

These three companies are not held accountable for their run-off or excess fertilizer use, which are currently classified as “non-point source” pollution. While industrial agriculture contributes to massive soil erosion and run-off, American taxpayers are paying for it. Industrial agriculture is operating with impunity while polluting lands, rivers, and oceans.

Mighty Earth’s report focuses on identifying the companies responsible for the “widespread manure and fertilizer pollution contaminating water from the Heartland to the Gulf.”

Their investigation maps the supply chains of top meat and feed companies and overlays it with data showing elevated nitrate concentrations in waterways that are experiencing high levels of fertilizer pollution in order to identify companies responsible.

And guess what company stood out? America’s largest meat company, Tyson Foods, was found to have an expansive footprint in “all regions suffering the worst pollution impacts from industrial meat and feed production.” Tyson Foods, which owns brands such as Jimmy Dean, Hillshire Farm, and Sara Lee, produces one out of every five pounds of meat produced in the United States. 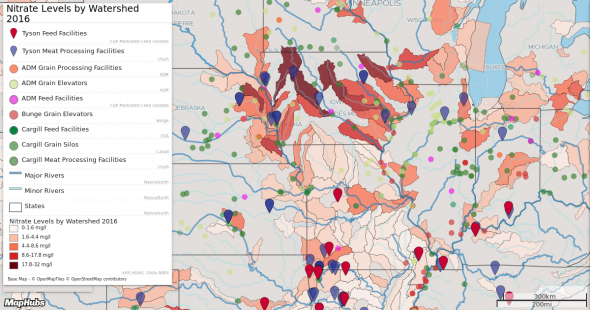 Tyson’s top feed suppliers are behind the bulk of grassland prairie clearance, which dramatically magnifies the impacts of fertilizer pollution, with Cargill and ADM clearly dominating the market for corn and soy with their network of grain elevators and feed silos in all the states with the highest losses. 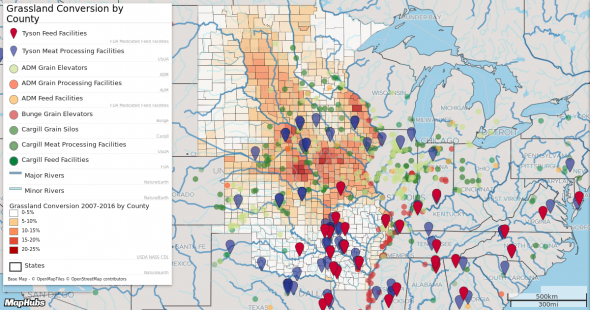 7 million Americans are exposed to unhealthy levels of nitrate contamination in their drinking water. So much pollution has run into the Gulf of Mexico this year that it has created one of the largest dead zones on record. This dead zone is caused by fertilizer pollution flowing down the Mississippi river from the American heartland.