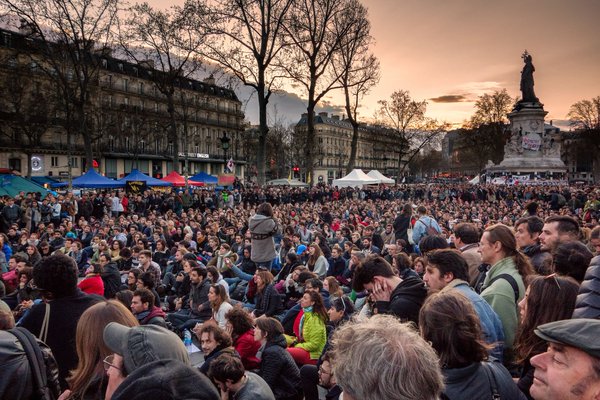 Above photo: People have been gathering in Republic Place every night for ten days in order to discuss about how to improve society. By Oliver Ortelpa.

One of the fastest growing social and political movements in recent history has been sweeping across France, spreading through Europe and now developing in North America and elsewhere. In the space of just over a month, it has transformed countless public and private spaces, in nearly 300 cities, by making them into dynamic centers of non-violent protest and political experimentation. Although the future is unpredictable, it has the potential to significantly transform the horizons of social and political possibility.

This is probably news to anyone watching the mass media in the Anglophone world. In spite of the fact that the movement, aptly named Nuit Debout (‘Night on Your Feet’ or ‘Night Uprising’), aims at reclaiming the night hours by standing up 24/7 against the non-stop global onslaught of neoliberal capitalism, it has been kept in the shadows by the major news outlets. In fact, there has been a virtual blackout on what might well be one of the most significant stories of 2016.

CNN, which bills itself as “among the world’s leaders in online news” with a 24/7 staff and worldwide reach, has not run, to my knowledge, a single story. A search for “Nuit Debout” on their website—as on the websites of CBS, CNBC, MSNBC, SBS World News, India Today and The Times of India—provides no results.[1] Although this massive movement recently celebrated its one-month anniversary, there are only a tiny handful of stories on it that I have been able to uncover in the Anglophone mass media, such as on Aljazeera English (1 story) and on the BBC (3 stories). Unfortunately, alternative, publicly funded news platforms—which play a crucial role in providing counter-narratives that resist the corporate party line—do not fare much better. This is not to say that there has not been some important coverage in venues like Roar Magazine, CounterPunch, Wikipedia and the Guardian.

Although the length and extent of this blackout is remarkable, condemning Night Uprising to the night of nights that is media invisibility, the act of ignoring transformative social and political movements is nothing new. On the contrary, it is phase one in the standard mass media playbook. It intimates to spectators that the events in question are insignificant, marginal and not newsworthy, thereby potentially contributing to their decline or disappearance. If this first phase is unsuccessful, however, or the story begins to gain traction in certain sectors, then the for-profit media more or less mechanically move on to phase two: delegitimate. There is already a tiny trickle of stories that are moving in this direction, if it be in theNew York Times (5 stories), the Wall Street Journal (2), on ABC news (2) or Fox News (3). The tenor, as well as the content, of these articles is similar. They point—from the right—to the failings of the socialist party and the ‘French Left,’ and they abound with adjectives such as incoherent, inchoate, unfocused, frustrated, restless, angry and violent.

There are also blatant misrepresentations, such as the following statement in what is arguably the article on the movement, which was released by the Associated Press and published simultaneously at the end of April by the New York Times, ABC, Fox News and numerous other outlets (a precise title search generates over 6,000 results on Google): “French protests are routinely marred by clashes as masked rioters smash shops or pelt riot police with projectiles.”

The corporate news has yet to fully embark on phase two, but we should anticipate—if the story finally garners some visibility—tales that ignore what is really at stake, belabor meaningless questions, spotlight individual acts of violence rather than structural and systemic state violence, deploy a sitcom logic of trivial conflict and dénouement, explain the movement as misguided or unsuccessful, belittle and infantilize the participants, and generally paint a picture that leaves spectators wondering why anyone in their right mind would actually be involved. This implicitly prepares for the third and final phase, which brings things full circle in an exasperated return to reality: ignore again.

Given the global reach and non-stop coverage of Anglophone media, they format people’s world-image in extremely powerful ways. They are reality makers in the sense that they dictate what is real and worthy of discussion, and they frame it in terms of a general understanding of the current state of the world. In the case of Nuit Debout, they have thus far transformed it into a night specter that barely arises in the liminal spaces of their administered reality. This is one more reminder that sleepless global capitalism works hand in hand with the soporific media machine insofar as the latter generates the somnambulists necessary for endless profit extraction sans glitches or resistance. Docile and uninformed subjects are thereby forged, unaware of global uprisings that seek to awaken defiance in the night of capitalist oppression and degradation.

And yet, there is pushback, as so many people recognize the deep complicity between for-profit media and a profit-driven economy and political system. Fully cognizant and wide-awake, participants in Nuit Debout have created their own news platforms in order to provide a worldview that punctures mass media ignorance and established scripts. Thanks to Radio Debout, TV Debout, Gazette Debout and other such outlets, immanent self-descriptions have been liberated from the storylines imposed by the commercial spin-doctors.

Against the official tripartite playbook (ignore – delegitimate – ignore again), alternative narratives have emerged, which can spawn a different operative understanding of the current situation and future possibilities. One of the interesting suggestions, which is found for instance in Frédéric Lordon’s account of Nuit Debout, is that it has the potential of generating results that surpass—or at least are significantly different from—the movements to which it has been compared, such as Occupy or the Indignados in Spain. If the former, according to some, led to a horizontal dispersion with major social and discursive gains but few material changes, the latter succumbed to vertical integration into the system of representational politics, in which it is more a question of moving the needle within institutions than of overthrowing them. The path charted by certain sectors of Nuit Debout is an oblique one, seeking to reanimate direct political action in such a way that there are deep institutional, structural and constitutional changes.

Although we should have no illusions about the ability of the corporatocracy’s PR machine to follow or even record alternative scripts such as this one, solidarity with the movement requiers waking up to its reality, mobilizing around it—such as on the Global Debout Day of Action planned on May 15—and opening ourselves to narratives other than those that have been repeated ad nauseam. When the future is at stake, it is imperative to recognize that there might be something at work that surpasses what we already presume to know. Nuit Debout is a powerful wake-up call: sleepwalkers of the world unite! It’s time to spend the night together.

[1] These calculations, as well as the others in this article, are based on searching “nuit debout” on the official websites of each news outlet on May 3, 2016. It is possible that there has been some coverage that did not refer to the movement’s name (as in this recent disparaging May Day report by CNN) or that was not tagged with it on their websites.

Gabriel Rockhill is a Franco-American philosopher and cultural critic. He is Associate Professor of Philosophy at Villanova University and founding Director of the Atelier de Théorie Critique at the Sorbonne in Paris, France. His books includeCounter-History of the Present: Untimely Interrogations into Globalization, Technology, Democracy (forthcoming in 2017), Interventions in Contemporary Thought: History, Politics, Aesthetics (2016), Radical History & the Politics of Art(2014) and Logique de l’histoire (2010).