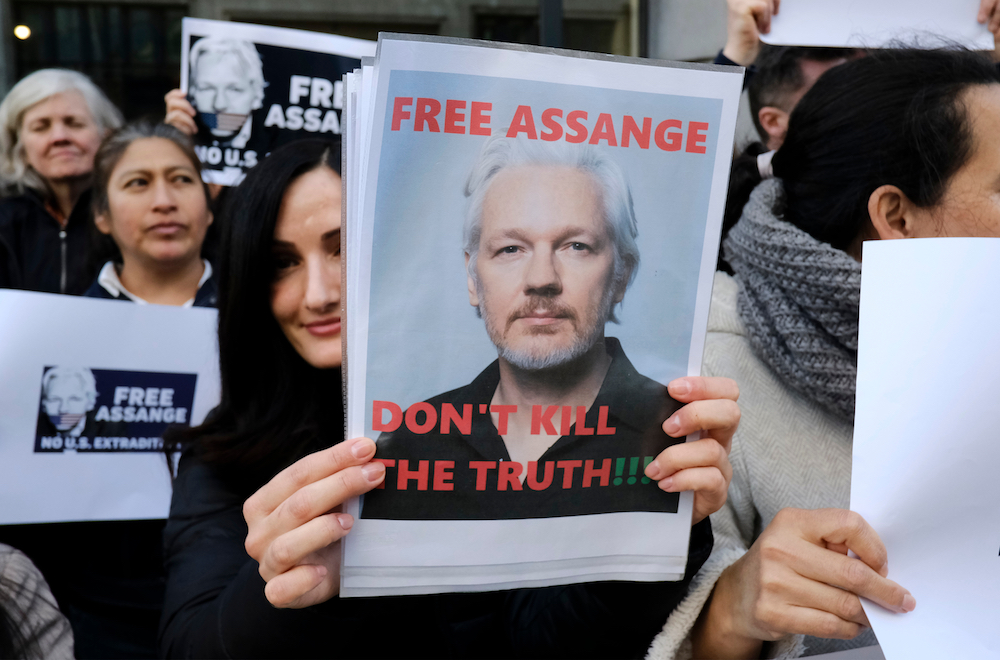 Media Elites To Assange: Fight For Your Own Hide

Above Photo: By Alexandros Michailidis/Shutterstock

The Committee to Protect Journalists mimics the government and drops the jailed Wikileaks founder like a hot potato.

WikiLeaks founder Julian Assange languishes in a British prison awaiting probable extradition to the United States to stand trial for violating the Espionage Act of 1917. Ironically, he is serving jail time for jumping bail on trumped-up sex crime charges in Sweden that even the Swedish government has now abandoned. Most Western, especially American, mainstream journalists, though, have expressed at most tepid opposition to the persecution of Assange, even as reports mount that his health has deteriorated to an alarming extent.

This is shameful and jeopardizes the news media’s own long-term interests.

The worst thing about such conduct is that so many reporters have bought into the Justice Department’s insistence that Assange is not a “legitimate” journalist. John Demers, the DOJ’s assistant attorney general for national security, bluntly stated the government’s thesis earlier this year. “Julian Assange,” Demers said, “is no journalist,” since he engaged in “explicit solicitation of classified information.”

Other Trump administration officials have conducted a similar campaign to delegitimize Assange’s status as a journalist, thereby justifying his prosecution for espionage. “WikiLeaks walks like a hostile intelligence service and talks like a hostile intelligence service,” CIA Director Mike Pompeo said in April 2017 during his first public speech as head of the agency. “Assange and his ilk,” Pompeo charged, seek “personal self-aggrandizement through the destruction of Western values.”

Unfortunately, much of the U.S. press seems eager to exclude Assange from its ranks. A decision by the Committee to Protect Journalists (CPJ) in early December underscored the mainstream media’s willingness to disown Assange. The CPJ refused to include him on its annual list of journalists jailed throughout the world. CPJ Deputy Executive Director Robert Mahoney’s attempt to explain the decision was an exercise in painful linguistic contortions. His December 11 blog post on the CPJ website used the unequivocal title, “For the sake of press freedom, Julian Assange must be defended.”

Much of the substance of the post, though, pointed to the opposite conclusion. “WikiLeaks’s practice of dumping huge loads of data on the public without examining the motivations of the leakers can leave it open to manipulation,” Mahoney sniffed. He continued:

To some, Julian Assange is a warrior for truth and transparency. To others, he is an information bomb-thrower. The question with which CPJ has had to grapple is whether his actions make him a journalist. Each year, we compile a list of journalists imprisoned around the world, based on a set of criteria that have evolved as technology has upended publishing and the news business. After extensive research and consideration, CPJ chose not to list Assange as a journalist, in part because his role has just as often been as a source and because WikiLeaks does not generally perform as a news outlet with an editorial process.

By using an array of rhetorical gymnastics, Mahoney and the CPJ tacitly accepted the Justice Department “logic” for prosecuting Assange, even as the CPJ officially condemned the prosecution itself. The bottom line is that the CPJ legitimized the government’s campaign to put Assange outside the boundaries of legitimate journalism.

Kevin Gosztola, managing editor of Shadowproof.com, aptly pointed out the underlying problem with the CPJ’s tightrope act: “Can a laudable press freedom organization claim Assange is not a journalist without aiding the political case brought by prosecutors in President Donald Trump’s Justice Department?” Gosztola also highlighted a likely reason for the CPJ’s ambivalent (at best) stance: “CPJ’s Board of Directors is composed of many journalists in the U.S. media establishment, an establishment which clings to the notion that Assange is not a journalist in order to maintain a supposed distinction between his work and their work.”

Whatever their motives, journalists who excuse or justify efforts to prosecute Assange are acting as gullible tools in the government’s ongoing campaign to plug leaks and stifle criticism, especially regarding defense and foreign policy issues. The intent is clearly to suppress embarrassing revelations by WikiLeaks and other players.

But the strategy the CPJ and its cohorts have adopted is akin to appeasing a tiger in the hope that it will eat the appeaser last—or, ideally, become sated with its initial victims. This approach is both unprincipled and myopic. The government has already made worrisome forays against troublesome mainstream journalists who have published embarrassing disclosures. Barack Obama’s administration conducted electronic surveillance of both New York Times reporter James Risen and Fox News reporter James Rosen in an effort to identify their sources. The government even named Rosen as an “unindicted co-conspirator” in an espionage case brought against his source. Similarly, the administration asserted that it had the right to prosecute Risen, even though it chose not to take that step. Those were ominous warning signals.

Government prosecutors are going after Assange because he is an especially controversial figure and therefore a more vulnerable target. But prosecuting him and WikiLeaks for espionage poses a mortal threat to a free and independent press in the United States. It is extraordinarily dangerous to the health of the First Amendment to allow the government to decide who is or is not a “legitimate” journalist. Only legacy publications friendly to the national security bureaucracy could then count on restraint—and, as the Rosen and Risen cases indicate, even that expectation would be quite fragile. The CPJ and other media institutions that choose to abandon Assange are playing the role of the government’s useful idiots and imperiling their own best interests.