Media Find Room For ‘Trumpcare Too Progressive,’ But Not For Single-Payer

Above Photo: Health care via Shutterstock

In May 2009, at the infancy of the healthcare reform battle that led to the Affordable Care Act, a group of nurses and single-payer activists were arrested for disrupting a Senate Finance Committee meeting chaired by Sen. Max Baucus (D.–Mont.) (Democracy Now, 5/13/09). These activists had been ignored by politicians and corporate media for years (FAIR.org, 3/6/09), and hoped an arrest, or eight, would bring attention to their cause.

Despite the efforts of the “Baucus 8,” the New York Times did not report on the event. Nor did much of the rest of the dominant media. Not even mass arrests could get the corporate media to give voice to single-payer advocates, even though their position is supported by the majority of the public (Gallup, 5/16/16).

This is worth remembering as the media cover the GOP House’s American Health Care Act (AHCA), the plan to “repeal and replace” the Affordable Care Act (ACA), known as Obamacare. While even eight arrests couldn’t get attention to left-wing critics of the Democrat’s milquetoast health reform plan in 2009–10, today the far right is given thousands of words in the press, and plenty of air time on television, to air its ideological opposition to the current GOP plan.

Their argument: The GOP plan is insufficiently regressive. That’s right: In the eyes of these critics, Republicans are just too generous to those in need of healthcare. This despite the Congressional Budget Office’s determination (3/13/17) that the bill would cause 24 million Americans to lose their insurance, 14 million of them from the stroke of Trump’s pen. 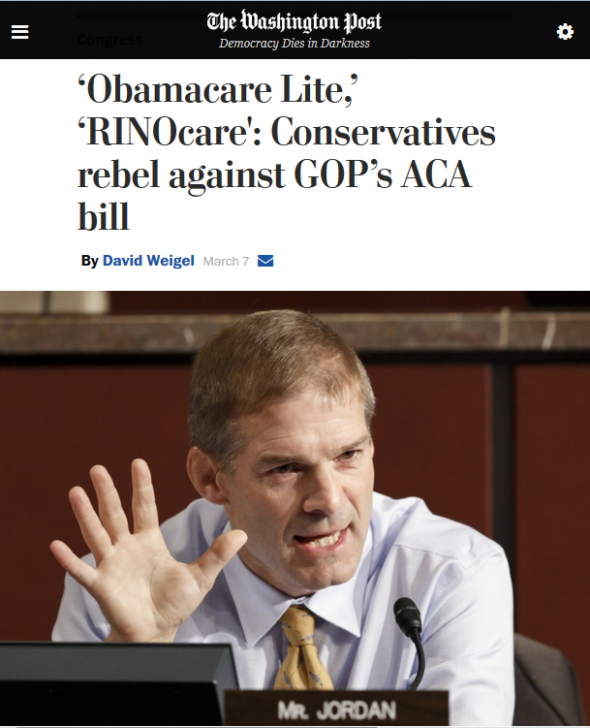 After the GOP bill passed two House committees, the Washington Post (3/7/17) devoted three reporters and 1,500 words to an article that gave prominent space to right-wing critics of the bill, which include the Club for Growth, Heritage Action for America and the House Freedom Caucus, along with senators Ted Cruz (R.–Texas), Mike Lee (R.–Utah) and Rand Paul (R.–Ky.)—right-wing forces who are cited as characterizing House Speaker Paul Ryan’s bill as “Obamacare Lite.”

This was just one of several articles that amplified the far-fetched notion that GOP House plan is too progressive. The very same day, another Post article (3/7/17), headlined “‘Obamacare Lite,’ ‘RINOcare’: Conservatives Rebel Against GOP’s ACA Bill,” gave yet more attention to those who want to shred any remnant of a healthcare safety net. It quoted five right-wing critics of the bill, and not a single person countering their claims—not even a slightly less radical Republican. 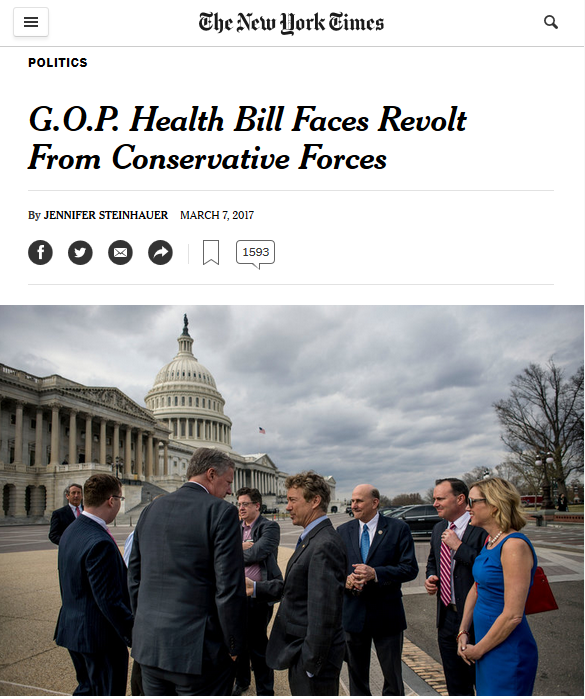 The New York Times provides a platform for those who felt Trumpcare was “not the Obamacare repeal bill we’ve been waiting for.”

The New York Times provides a platform for those who felt Trumpcare was “not the Obamacare repeal bill we’ve been waiting for.”

The New York Times (3/7/17) also gave prominent voice to this “sudden revolt” from the right. “This is not the Obamacare repeal bill we’ve been waiting for,” said Senator Lee to the Times, which noted he was “was joined by a constellation of conservative groups” including “Charles G. and David H. Koch’s Americans for Prosperity.” These articles from the Post and Times were picked up widely in papers across the country (e.g., Houston Chronicle, 3/7/17; Albuquerque Journal, 3/7/17), illustrating their agenda-setting function.

This great debate about whether or not the AHCA is too redistributive was also on display during the Sunday talkshows. On Meet the Press (3/12/17), the narrative was “repeal, replace and revolt,” and put a particular emphasis on right-wing critiques. “It appears to be the largest welfare program ever proposed by Republicans in the history of our country,” Rep. Mark Meadows (R.–N.C.) said on the episode. Senator Paul made similar arguments on Face the Nation (3/12/17).

The amplification of these right-wing voices should not be confused with a bias against the ACA or the Democrats. In fact, arguments against repeal of the ACA are widely published (Reuters, 3/13/17) and aired (CNN, 3/7/17). Chuck Todd on Meet the Press (3/12/17) cited the opposition from what he called the “left-leaning” Brookings Institution—a corporate-funded establishment think tank that corporate media view as representative of the American left (FAIR.org, 11/1/98, 7/1/12).

The issue here is the doctrinal, ideological parameters of the mass media that narrow debate considerably. On the issue of healthcare specifically, it accepts only “market solutions” as worthy of serious consideration (Washington Post, 12/25/13).

The “Propaganda Model,” described by Noam Chomsky and Edward Herman in Manufacturing Consent, posits that corporate media content will, broadly speaking, reflect elite interests (FAIR.org, 2/1/09). News and debate that does this will be covered and amplified; news and debate that threatens these interests are ignored and/or dismissed.

The ACA, however, doesn’t really threaten elite interests. It originated from a conservative think tank (Forbes, 10/20/11) and was crafted with major input from industry (New York Times, 6/8/12). Most of the more progressive elements of the bill, notably the public option (The Hill, 2/23/10), were removed or weakened. The industry did well under the ACA (Salon, 10/28/16), which maintains healthcare as a commodity and not a right (Truthout, 6/9/2016), and is largely ambivalent about the coming reform under Trump.

On the other hand, single-payer, or Medicare for All, does threaten centers of private capital, namely the drug and insurance industries. So even though it has popular support, corporate media mostly ignore it. When it is covered, it is usually dismissed.

The aforementioned treatment of the Baucus 8 is one example of this. The coverage of Sen. Sanders’ presidential campaign showed a similar bias (FAIR.org, 1/30/16). But there are more direct examples to compare.

A ‘Different Discussion’: The Marginalization of Single-Payer

The New York Times‘ sole mention of single-payer following the unveiling of the ACA relegated it to “a different discussion”–which somehow never took place.

The one reference to “single-payer” in the New York Times after the unveiling of the ACA.

The New York Times‘ sole mention of single-payer following the unveiling of the ACA relegated it to “a different discussion”–which somehow never took place.

In the first week of coverage following the House’s unveiling of the Democrats’ legislation (7/15–21/09), there were no mentions of “Medicare for All,” and only one mention of “single-payer,” in the New York Times. That mention was from a conversation (7/16/09) between columnists David Brooks and Gail Collins, in which Brooks notes that a public plan (emphasis added) “only really works if it leads to single payer, which is a different discussion.” This is quite the case study of how the corporate media treats single-payer: It is reserved for a “different discussion” and therefore not worth mentioning, except to explain that it is not worth mentioning.

During coverage of this early stage of the Affordable Care Act (7/15/09), there was no reporting on the many single-payer advocates and organizations who were upset with the Democrats’ plan, including Physicians for a National Health Program (6/6/09) and Healthcare-Now!. The only progressive influence on the debate was a push for a “public option,” a plan that would have allowed for, at most, 1 percent of the population to be enrolled in a quasi-government-run insurance plan. The public option didn’t satiate many activists, but some progressives viewed it as a “voluntary transition toward single-payer” (Health Affairs, 6/10).

Either way, even mentions of this more modest proposal were brief and largely emphasized opposition to the plan, as in a New York Times report (7/15/09):

In addition to widespread Republican resistance to the government insurance plan, Democrats are also contending with apprehension within their own ranks. Centrist lawmakers including Ben Nelson of Nebraska, Mark Pryor and Blanche Lincoln of Arkansas, Mary Landrieu of Louisiana and Joseph I. Lieberman, the Connecticut independent, have all expressed reservations about the idea.

The dismissal of those who insisted on having a public option in the bill became the status quo in the media in the following months (Extra!, 4/1/10). MSNBC’s Chris Matthews (12/17/09) said he was “not sure that they’re regular, grown-up Democrats,” while Joe Klein (Time.com, 12/16/09) attacked “left-bloggers in high dudgeon” for the same reason, saying their “nonsense” calls “into question the ability of the Democratic Party to govern this country.” Those who relented in their support, including President Obama (New York Times, 12/17/09; Politico, 12/7/09), were invariably described as “pragmatic.”

Corporate Media as an Obstacle to Healthcare Justice

That it would threaten women’s health is a criticism of Trumpcare that corporate media find less interesting than the claim that it’s too generous to the poor.

The coverage of the infancy of the ACA stands in stark contrast to how the media narrative is functioning as the GOP starts its reform process. The ideological push from conservatives is one of the major stories being pursued by corporate media, and outside pressure from the right toward the GOP is taken seriously. In the week since the AHCA went through committee, there were four articles mentioning the Heritage Foundation’s skepticism of the bill, and three mentions of “Grover Norquist,” in the New York Times alone. In other words, for every mention of single-payer healthcare, the Times had three mentions of Grover Norquist.

While corporate media focus on the ridiculous argument from the right that the repeal bill is too progressive, they are downplaying many important stories, such as how the GOP bill would hurt women’s health (Intercept, 3/6/17) or make cuts to mental health and addiction coverage (Mother Jones, 3/10/17). Why is the Heritage Foundation taken more seriously than the National Alliance on Mental Illness (3/7/17), for instance, which has expressed grave concern over the bill?

Corporate media coverage is bolstering the false perception that “the center” on healthcare policy is somewhere between supporting the ACA and Rand Paul–style pseudo-libertarianism. In fact, most Americans want a public, universal healthcare system to be a reality. But the corporate media won’t even let it be part of the discussion.