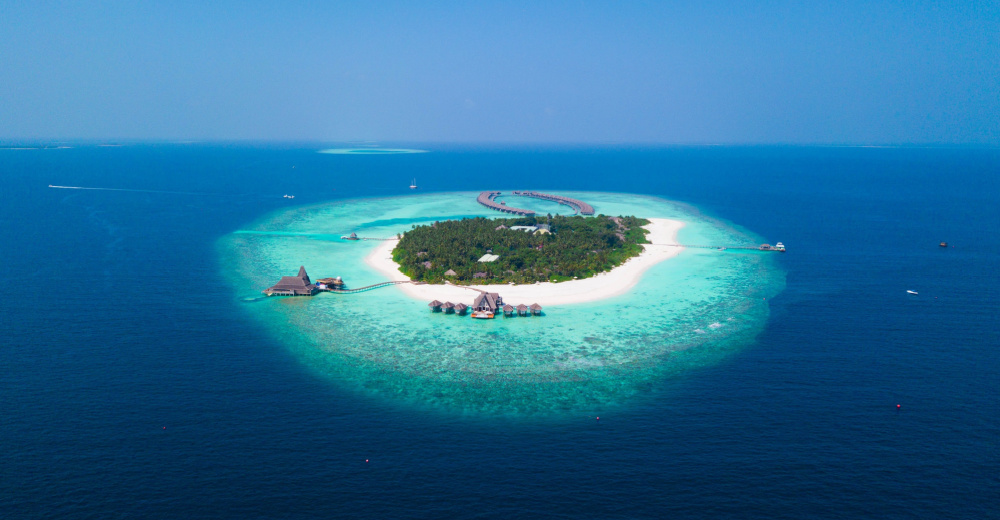 Above Photo: The IPCC’s Sixth Assessment Report‘s illustration of the threat to small islands.

On Earth Day, no doubt most major media will pay lip service to the extreme dangers of climate change. But what happens the next day?

A major Intergovernmental Panel on Climate Change report, released at the end of February, could scarcely have been more clear—or more dire:

Any further delay in concerted anticipatory global action on adaptation and mitigation will miss a brief and rapidly closing window of opportunity to secure a livable and sustainable future for all.

The IPCC released a follow-up report on April 4 focused on how to limit the damage; the co-chair of the report’s working group warned that “it’s now or never.” It’s too late to avoid many of the effects of our addiction to fossil fuels, but drastic action must be taken immediately if the planet has any hopes of avoiding catastrophic levels of warming.

US media, however, are largely treating the climate crisis as just another news story among many.

When the dramatic IPCC report was released on February 28, most major outlets covered it in prime time. CBS Evening News, NBC Nightly News, ABC World News Tonight and PBS NewsHour mentioned the report that day. But in the subsequent six weeks, the climate crisis dropped almost entirely off the radar of most of these shows.

NBC Nightly News and ABC World News Tonight mentioned climate change (or the “climate crisis,” or “global warming”) only one other night during that period—a month later, when the next IPCC report came out (4/4/22). CBS Evening News returned to the subject only twice (3/31/22, 4/5/22). PBS NewsHour, to its credit, ran eight more shows that mentioned the crisis.

Incredibly, cable news was even worse. None of the 6 pm CNN, MSNBC or Fox news programs even mentioned either IPCC report. CNN‘s Situation Room mentioned climate change only once (3/7/22) during the entire six weeks. MSNBC‘s The Beat aired two shows that touched on it (3/2/22, 3/3/22). Fox News Special Report named climate change nine times—but almost always in the context of attacking a Democratic statement or action to address it.

Gloomy reports on the fate of our planet don’t drive ratings, nor do corporations thrill to the thought of their ads running next to such reports. But as the IPCC reports made abundantly clear, the climate crisis is an emergency that demands urgent, sustained attention and action—not a fleeting mention once a month.