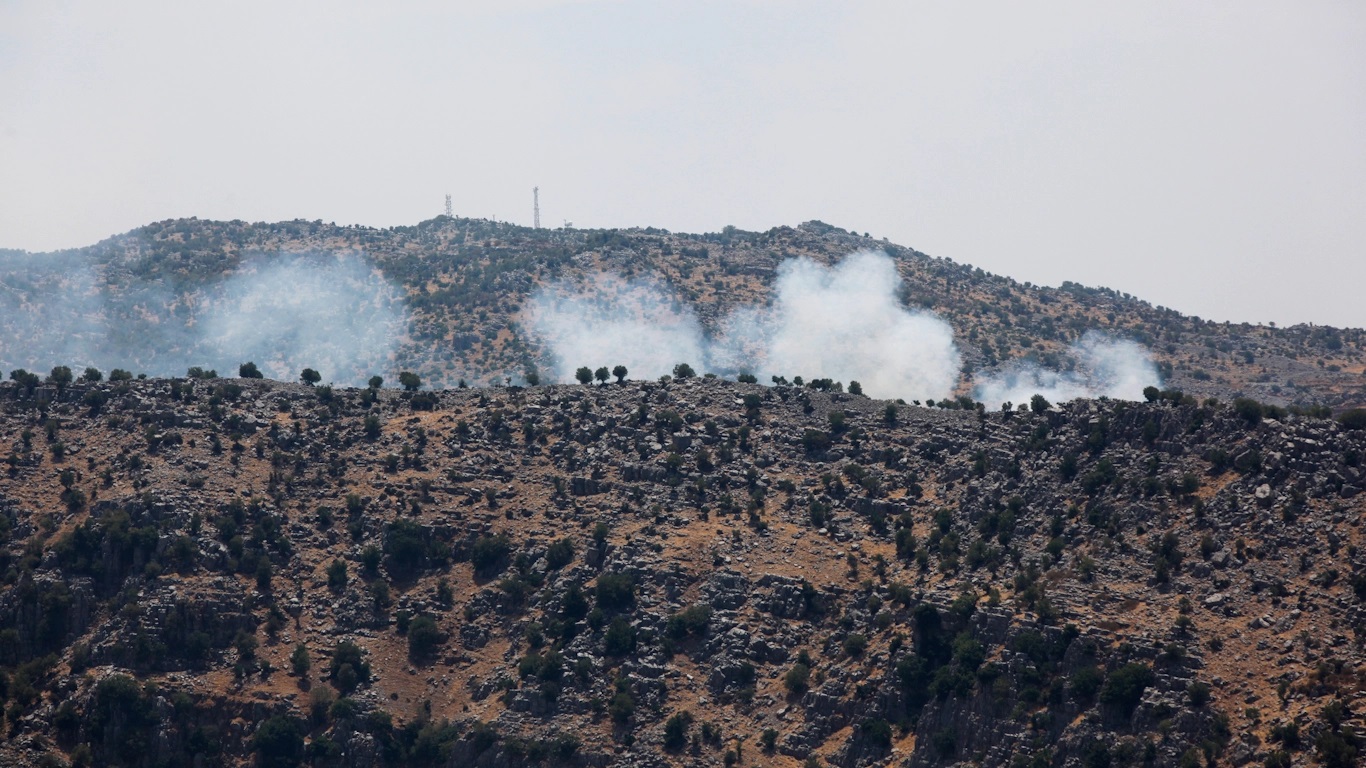 Media Paints Israel As ‘Victim’ As Hezbollah Responds To Airstrikes

Golan Heights –  Sirens blared in the upper Galilee and Golan Heights, as rockets rained down on Israeli-held territory in the disputed Shebaa Farms area this morning. There were no immediate reports of casualties, but a state of fear did seem to emerge in the largest escalation between Israel and Lebanese Hezbollah in 15 years.

Lebanese Hezbollah has claimed responsibility for the firing of the 19 rockets into northern Israel in response to a series of Israeli air and artillery strikes carried out earlier this week on southern Lebanon. The rocket fire reportedly shocked the Israeli military establishment and sparked further aggression against targets in Lebanon’s south; and, in defiance of all evidence, Western mainstream media quickly took to painting Israel as the victim.

This morning’s rocket fire, specifically targeting open areas, was the first of its kind conducted by Hezbollah since the conclusion of the 2006 Israel-Lebanon war, which ended with the implementation of United Nations Security Council Resolution 1701. Lebanon’s prime minister-designate, Najib Mikati, confirmed following today’s incident that he stands firmly for the continued implementation of the ceasefire resolution, while the nation’s caretaker prime minister, Hassan Diab, had days ago complained to the UN about Israel having violated it.

Hezbollah announced that its retaliatory rocket fire had specifically targeted open areas in the towns of Al-Jarmaq and Al-Shawakir in northern Israel as a clear message to Israel triggered by its aggression against Lebanese territory in the previous days. Following the attack, Israel again carried out attacks on Lebanese territory and it was reported that bomb shelters were open in Israel’s Kiryat Shmona, in anticipation of further retaliation from Lebanon.

Although promising a response to Hezbollah, both “overt and covert”, the Israeli military has indicated that it is not seeking a war with Lebanon over rockets falling in open areas. UNIFIL, the UN peacekeeping force based in southern Lebanon, claimed that the rocket fire had come from areas outside of its jurisdiction, urging calm on both sides and warning of a “very dangerous situation”.

Speaking to “al-Mayadeen TV,” the deputy secretary general of Hezbollah, Sheikh Naim Qasem, clarified that “with regard to the events that took place today in Lebanon, Israel attacked yesterday and bombed an area in Lebanon, and Hezbollah has publicly committed that an attack on Lebanon means that it will be met with an appropriate response,” also stressing to Israel that it “must understand that Lebanon is not an open arena for settling its accounts in, and not a place to test its capabilities.”

The focus of Western mainstream media has been heavily centered on Hezbollah’s rocket fire into Israel, with some outlets claiming that Israel had retaliated against Hezbollah and not the other way around. Israeli violations of Lebanese sovereignty, sometimes numbering into the thousands each month, have been largely ignored by the international community and Western press.

There has also been little action taken by the international community against Israel for its frequent use of Lebanese airspace to launch unprovoked attacks on Syria, the latest of which took place just two weeks ago. Hours following Israeli airstrikes carried out on Aleppo, Syria on July 20, rocket fire from Southern Lebanon triggered sirens in Israel’s north, which was followed by a series of strikes against Lebanese territory.

The rockets, which landed in open areas, were said to have been fired by Palestinian armed groups responding to Israeli attacks on worshippers in Jerusalem’s al-Aqsa Mosque compound. Unnamed armed Palestinian groups were also blamed for firing rockets into Israel from Lebanon during Israel’s 11-day assault against the Gaza Strip back in May.

When the recent round of tensions escalated this Wednesday, Palestinians were also said to have been behind the seemingly random rocket fire into Israel’s Kiryat Shmona. Besides triggering an immediate response from Israel, the rocket fire also served as a justification for days of Israeli attacks on Lebanese territory, which Lebanon’s President Michel Aoun said showed “aggressive intent” from Israel.

The secretary general of Hezbollah, Seyyed Hassan Nasrallah, has vowed that the group would respond to Israel for the killing of Ali Kamel Mohsen and Muhammad Qassem Tahan. Mohsen was killed by an Israeli airstrike on the Damascus International Airport in Syria last year, while Tahan was shot dead at a border protest in May. According to Nasrallah, each member of Hezbollah or Lebanese citizen that Israel kills will be avenged with an equal retaliation upon the enemy, Israel.

Recent events indicate that the Lebanon-Israel conflict has entered a new phase of escalation, with growing fears of an all out war between the two sides.