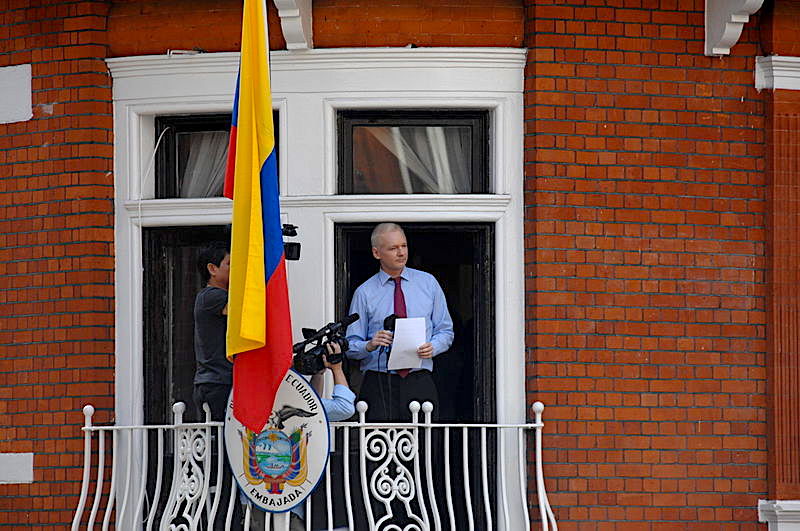 Since 2006 WikiLeaks has been censuring governments with governments’ own words.

It has been doing the job the U.S. constitution intended the press to do.

“In the First Amendment the Founding Fathers gave the free press the protection it must have to fulfill its essential role in our democracy. The press was to serve the governed, not the governors. The Government’s power to censor the press was abolished so that the press would remain forever free to censure the Government.”

That’s what WikiLeaks and Julian Assange have been doing since 2006: censuring governments with governments’ own words pried from secrecy by WikiLeaks’ sources—whistleblowers. In other words, WikiLeaks has been doing the job the U.S. constitution intended the press to do.

One can hardly imagine anyone sitting on today’s U.S. Supreme Court writing such an opinion. Even more troubling is the news media having turned its back on its mission. Today they almost always serve the governors—not the governed.

The question is why.

Consolidation of media ownership has increased obedience of desperate journalists; entertainment divisions have taken over news departments; and careerist reporters and editors live vicariously through the power of those they cover, rejecting the press’ unique power to hold those officials to account.

It comes down ultimately to lifestyles. Men go to war to protect and further their lifestyles. The press cheers them on for residual material betterment and increase in status.

Millions of lives erased for lifestyles.

It used to be accepted in television that news departments would lose money and would be supported by the entertainment division. That’s because news was considered a public service. TV newsmen — they were almost all men in those days— were former wire service and newspaper reporters.

But greed has put the presenters’ personalities before public service, as entertainment masquerades as news. Newspapers have sacrificed investigative units to maximize profit. Government is the winner.

The abdication of the mainstream media of their constitutional responsibility to serve the governed and not the governors has left a void filled for more than a decade by WikiLeaks.

No longer do today’s Daniel Ellsbergs need to take their chances with editors at The New York Times or The Washington Post, or with their reporters spinning the damning information they risk their freedom to get to the public — no matter how disinterested and distracted the public may be.

Now the traditional media can be bypassed. WikiLeaks deals in the raw material, that governments hang themselves with. That’s why they want Assange’s head. They lust for revenge and to stop further leaks that threaten their grip on power.

That the corporate media has turned on Assange and WikiLeaks reveals their service to the state and how much they prioritize their style of life — disregarding the carnage they help bring about.

Indeed the U.S. Espionage Act, which has withstood First Amendment challenges, criminalizes a publisher’s or journalist’s mere possession, as well as dissemination, of classified material. A 1961 amendment to the Act extended U.S. jurisdiction across the world. Assange is threatened by it.

U.S. administrations have been reluctant to take the step of post-publication prosecution, however.

Richard Nixon did not prosecute Sen. Mike Gravel, who was constitutionally protected when he read the Papers, given to him by Ellsberg, into the Congressional record. But Gravel could have been prosecuted for publishing the Papers as a book. (Nixon empaneled a grand jury to indict New York Times reporters for publishing the Papers, but the case fell apart when it emerged that Ellsberg’s phone had been tapped.)

Barack Obama decided to back off Assange when it was plain The New York Times and other corporate media would be as liable as Assange and WikiLeaks for publishing classified information. The virulently anti-media Trump administration, however, took that step when Assange was arrested.

From their point of view it’s easy to understand why the U.S. wants to crush Assange. But what is Australia’s excuse? Why is it fighting America’s battles? Why has the Australian mainstream media also turned against Assange after an election held in the U.S., not here?

What has happened to Australia’s sovereignty? That’s a question that can be answered by Australians coming into the streets, like today — and staying there until their compatriot is at last free. Free to continue to do the job the media refuses to do.

Joe Lauria gave the original version of this speech at a rally for Julian Assange in Sydney on March 3, 2019. You can watch the video of the speech here: