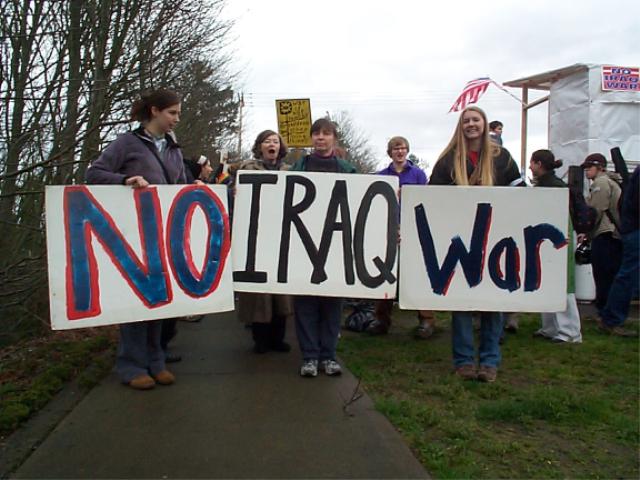 WASHINGTON — Kent Conrad’s phone hasn’t been ringing very much over the past few weeks, as Iraq, and the debate over America’s future in the country, has once again dominated the news.

The architects of the Iraq war are back in TV studios and on op-ed pages, as are journalists and pundits who promoted the Bush administration’s ultimately bogus case for invading. But Conrad, a former senator who was one of only 23 to vote against authorizing the war in October 2002, hasn’t heard from CNN, MSNBC or any other TV outlet. “Not once,” he said, when asked if anyone in the press had reached out regarding the current crisis in Iraq.

In an email to The Huffington Post, Conrad, a North Dakota Democrat, offered two possible explanations. The first, he said, is “simply the incompetence of the media.” The second is “the shrillness of those trying desperately to rewrite history to cover their own devastating failures.”

Despite catastrophic misjudgments — that Iraq had weapons of mass destruction, that U.S. forces would be greeted as liberators, that the war would pay for itself with oil revenues — the Iraq war boosters keep getting booked, while those politicians and journalists who were skeptical of the Bush administration’s “slam dunk” case for war remain largely on the sidelines.

McClatchy’s Jonathan Landay, who was part of the Knight Ridder team that produced what is widely regarded as the best pre-war reporting, has only been invited to discuss Iraq’s unraveling on CNN’s “Reliable Sources,” a media criticism program. Landay, who just returned from a 10-day reporting trip in neighboring Syria, hasn’t heard from any cable news or Sunday public affairs shows.

Landay views the decision to book former Vice President Dick Cheney and former deputy defense secretary Paul Wolfowitz as a cynical attempt at getting “clicks and eyeballs.” Though Cheney and Wolfowitz “got things so disastrously wrong,” he said, the media gives them platforms “to create controversy, and that controversy will be enhanced by whatever they say, irrespective of whether it’s accurate or not.”

“The analogy I’d draw is the following: You go to a doctor, who diagnoses an ailment and proscribes drugs and surgery,” Landay said. “The diagnosis, however, turns out to be disastrously wrong and as a result, the drugs and surgery leave you crippled for years to come. Are you going to go back to that same doctor to diagnose your next illness? No, you aren’t. In fact, you probably sued him/her for malpractice after the first go-round. Unfortunately, we can’t sue Bush, Cheney, Rumsfeld, Wolfowitz, Rice, Feith and the others for malpractice. But we can stop listening to them.”

Landay’s absence from the talking head circuit could be chalked up to the fact that he’s not a lawmaker who has say over how to proceed in the civil war-ravaged region. TV bookers, of course, tend to gravitate toward higher-profile guests. And herein lies another media challenge for the community of Iraq war skeptics. There simply aren’t that many high-profile lawmakers who got the vote right last time around.

Of the 23 senators who voted against the war, only eight remain in Congress. Three passionate critics of the Iraq invasion, Sens. Ted Kennedy, Robert Byrd and Paul Wellstone, have died. Another major skeptic, former Sen. Russ Feingold, now serves in the Obama administration as a special envoy to an African region. And former Vice President Al Gore, who, unlike his successor, was right about Iraq, remains focused on climate change and hasn’t spoken out about the current mess.

Meanwhile, Vice President Joe Biden, Secretary of State John Kerry, Senate Majority Leader Harry Reid and presumed Democratic presidential front-runner Hillary Clinton were all senators in 2002 and all voted for the Iraq resolution. (The latter two have apologized for their votes in recent interviews.)

That leaves a small group of Democratic senators with both the political clout and moral standing to represent the anti-war faction on television, including Sen. Dick Durbin (D-Ill.), Barbara Boxer (D-Calif.) and Pat Leahy (D-Vt.). Boxer is the only one who has gone on TV to discuss the current crisis, saying on CBS’ “Face the Nation” Sunday that her 2002 vote against the war was one of her “proudest moments.”

If the pool of current senators who opposed the war in 2002 is too shallow, bookers could look to former ones, like Conrad. But they too are being kept largely out of the discussion. Former Sen. Gary Hart of Colorado said that he has not been asked to discuss the current situation on television despite having been against the invasion when “most leading Democratic senators voted aye.”

“Fair and balanced mainstream media,” he said sardonically, when asked why the war boosters were appearing so frequently instead.

Of course, current and former lawmakers, and fellows at Washington think tanks, aren’t the only guests who can speak authoritatively about the Iraq war and the current threat posed by militant group the Islamic State in Iraq and al-Sham.

Landay suggested that TV bookers look beyond the Beltway to experts who “actually spent substantial time on the ground and know the region, its people, cultures and history, as opposed to former officials who learned much of what they believed from spending most of their time inside the stultifying, disconnected security bubbles of Washington, embassies and presidential palaces.”

Historian Andrew Bacevich expressed a similar view in a recent interview with Bill Moyers, the veteran journalist who chronicled the media’s Iraq boosterism in the documentary “Buying the War.” Bacevich accused those who book guests for broadcast of living “within this bubble, this Washington milieu” in which political debates are the overarching objective.

He elaborated in an interview with The Huffington Post. “People who book folks to go on to Sunday talk shows, or the gatekeepers on the op-ed pages of the Times and Post, tend to view it through a lens of partisan politics,” Bacevich said. “So if Iraq is falling apart, their reflexive inclination is to say, ‘Let’s go get someone who is a critic of Obama.’ And who better to do that then a neoconservative or a senior member of the Bush administration?”

Bacevich said that his media appearances have been largely on public radio, and that aside from the Moyers interview on PBS, his only television booking was on Al Jazeera America.

Not all critics of the war have been denied airtime. Lawrence Wilkerson, who served as chief of staff to former Secretary of State Colin Powell, has been a prolific talking head on Iraq in recent weeks. By his count, he has been on NBC, ABC, MSNBC, CNN, BBC, ITV4, Al Jazeera, Russia Today, CTV in Canada, CCTV in China, and others. He would have done more appearances if not for a recent surgery and growing exhaustion with “the talking head routine.”

But he is a bit of an anomaly, as he actually helped make the case for the war in 2002 and 2003, only to sour on it shortly thereafter and become a vocal opponent. He has several theories for why Bush administration officials, as well as the more hawkish senators, are dominating the current conversation, “some of which border on the sublimely ridiculous and even absurd,” he said.

“Part of it is the almost lurid nature of our contemporary media: these people make things even more lurid,” Wilkerson said. “Part of it is the aggressive approach these types take to the media. And part of it is that many are weary of the entire subject of Iraq and, like most Americans, wish it would go away.

“I’m not sure I wouldn’t put the president in that camp, were he able to exercise his true prerogatives,” Wilkerson continued. “It’s a mess, to be sure, a mess we largely created — ‘we’ being George Bush and Dick Cheney and all their minions, myself and Powell included, however reluctantly. I’m fairly certain that no one knows now how to extricate us from that mess. So, most do not want to have that ignorance exposed.”