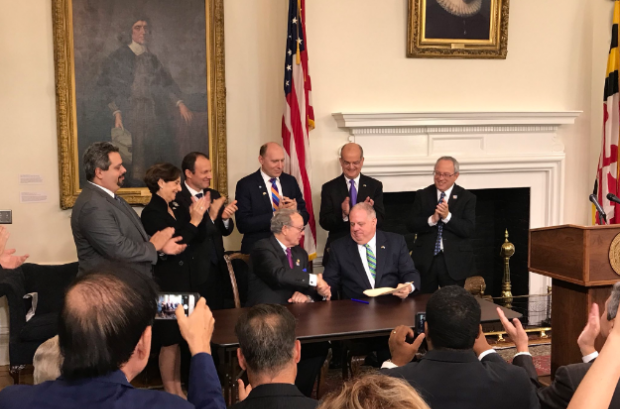 American mainstream media continue to misrepresent the boycott, divestment and sanctions (BDS) movement for Palestinian rights in reporting on goverment efforts intended to curtail the campaign.

The latest example is from Maryland.

#Israel ???????? is thankful for the steadfast support of @LarryHogan and the ppl of #Maryland against those who wish to delegitimize it pic.twitter.com/GGvmsd1x3m

Since 2016, activists in Maryland have twice beaten back efforts to pass such an anti-BDS measure through the state legislature.

The governor’s executive order pertains not just to Israel, but to Palestinian territories occupied and colonized by Israel in violation of international law. Hogan is signaling Maryland’s complicity in this law-breaking.

What is BDS about?

What the AP says is important because its reports typically appear in hundreds of publications around the world.

Witte described BDS as “founded in 2005 to protest Israel’s actions toward Palestinians by boycotting Israeli products and companies.” He did not provide any detail about what specific Israeli actions BDS supporters are protesting.

Consequently, readers did not hear that the nonviolent movement is calling for an end to Israeli military occupation and settlement building that is against international law, equal rights for Palestinian citizens of Israel who face systematic discrimination and implementing the internationally recognized right of return for Palestinian refugees.

Instead, Hogan, a Republican, was allowed to misrepresent the movement, saying, “Boycotts based on religion, national origin, ethnicity or place of residence are discriminatory, and contracting with businesses that practice discrimination would make the state a passive participant in private sector commercial discrimination.”

Witte’s report failed to mention that the BDS National Committee – the campaign’s Palestine-based steering group – is very explicit about rejecting all forms of racism and religious bigotry, including Islamophobia and anti-Semitism.

No voice supportive of BDS was included in the first version of Witte’s article that this writer saw on Monday afternoon.

Only after an inquiry was emailed to Witte asking why he did not include any voices from, say, Jewish Voice for Peace or the US Campaign for Palestinian Rights did an updated version appear – within the hour – with a quote from Yousef Munayyer, executive director of the US Campaign.

#Israel ???????? is thankful for the steadfast support of @LarryHogan and the ppl of #Maryland against those who wish to delegitimize it pic.twitter.com/GGvmsd1x3m

Whether or not Witte read The Electronic Intifada’s inquiry and decided to reach out to someone who could provide information about BDS is unclear.

However, Munayyer told The Electronic Intifada he was contacted by Witte at around 5 pm – 40 minutes after the inquiry was sent to the AP reporter.

Where are the Palestinian voices?

Fair-minded journalism requires that Palestinians, who are the ultimate targets of anti-BDS laws and the anti-Palestinian Israeli officials and lobby groups that promote these measures across the country, be given at least equal time. As it is, comments from advocates insisting on equal rights for Palestinians are too infrequent.

It is positive that Witte eventually included an opposing voice, though it would have been more informative had he provided some detail on the goals of the BDS movement, not just what its opponents say about it.

Hogan’s official press statement quotes an Israeli diplomat and several leaders of Israel lobby groups praising the governor’s action, including one who calls the BDS movement “anti-Semitic” – a frequent false charge. All that reflects the government’s line; journalists ought to be challenging and asking questions about it, not simply echoing it.

Instead, she relied on the American Civil Liberties Union to make a free-speech case against the governor’s order.

The ACLU has been strongly critical of anti-BDS measures, arguing that they violate the First Amendment, but the organization is neutral on the boycott of Israel itself.

Cox did mention troubling use of legislation against BDS supporters in Kansas and Dickinson, Texas.

Elsewhere, however, she editorialized that BDS “has gained only modest support in the United States,” notwithstanding ample evidence Israel lobby groups are alarmed by its successes.

By not properly describing the BDS movement and its goals, journalists give readers no insight into the fact that BDS is about promoting full and equal rights for Palestinians – just as boycotts were and are still widely used in the United States and globally to defend and promote the rights of people facing systematic violations.

Here’s what Cox did say: “The BDS movement has gained support among Palestinian advocates, some mainstream Protestant groups and some left-leaning Jewish organizations that object to the policies of Israeli Prime Minister Benjamin Netanyahu.”

Yet these groups do much more than oppose the policies of Netanyahu. They object to the policies of occupation, colonization, violent expulsion, discrimination and denial of refugee rights that Israeli governments of right, left and center have been perpetrating for decades.

Cox quotes Governor Hogan saying, “They’re asking people to discriminate against Israel.” He then adds, “There’s no argument to the contrary that makes any sense.”

In fact, there is an argument.

The problem is that Cox, like too many journalists, provides no space for a thoughtful commentator to note that the BDS movement shares tactics with other nonviolent movements in the US to end Jim Crow and in South Africa to end apartheid.

The Palestinian-led BDS movement for equal rights and freedom is no more “discriminatory” than efforts in the last millennium to end institutionalized white supremacy.