Media Wonder: Why Can’t Venezuela Be More Like Bolivia?

Western corporate media outlets have often cried foul when foreign elections don’t go the way the US empire wants them to, and find roundabout ways to label the violent attempts by vocal right-wing minorities to use military forces to overthrow leftist governments as “protests” rather than coups (FAIR.org, 5/16/18, 5/1/19). But it’s still rare to see them blatantly call for a right-wing coup without a hint of their usually subtler pretenses. 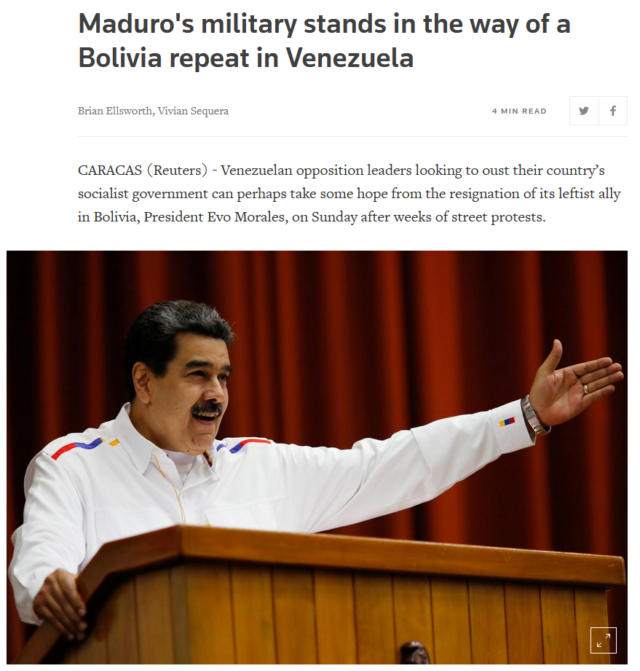 For Reuters (11/11/19), the failure of “Maduro’s” military to launch a coup “stands in the way” of regime change in Venezuela.

Reuters’ report, “Maduro’s Military Stands in the Way of a Bolivia Repeat in Venezuela” (11/11/19), noted that “Venezuelan opposition leaders looking to oust their country’s socialist government” can “take some hope” from the “resignation of its leftist ally in Bolivia, Evo Morales.” There’s just one problem:

But one key factor makes the Bolivia playbook a difficult one to carry out against Venezuelan President Nicolas Maduro: Venezuela’s armed forces have consistently refused to take the side of protesters as Bolivia’s military did on Sunday.

Reuters’ Brian Ellsworth and Vivian Sequera complained that “Venezuela’s barracks have stood by the ruling Socialist Party,” despite a “crippling economic meltdown,” “waves of major protests” and “broad condemnation of Maduro’s 2018 re-election that was widely described as fraudulent.” (Despite such descriptions, which are indeed widespread, there is no reason to question whether President Nicolás Maduro won the May 2018 election, which was largely boycotted by the opposition.)

Reuters lamented that the unpopular US-backed Juan Guaidó’s unconstitutional efforts to “court the armed forces have not been enough to sway their allegiance to Maduro,” despite his being “recognized by more than 50 countries as Venezuela’s legitimate president.” (Note that this means that approximately 75% of the world’s countries don’t recognize Guaido, who lacks UN recognition.) The implication is that the Venezuelan military should stage a coup, just as the Bolivian military did when the armed forces commander William Kaliman

called on Morales to step aside, giving momentum to street protestors alleging fraud at an October presidential election that Morales was judged to have narrowly won.

Morales’ run for the presidency was approved by the Bolivian Supreme Court (whose judges are elected, rather than appointed as in the US), and, as was predicted in pre-election polling, Morales “narrowly won” the October 2019 election by more than 10 percentage points, which is why he did not face a runoff election. The Center for Economic and Policy Research found that there’s no evidence discrediting the legitimacy of Morales’ reelection. Only one US president in the past 50 years—Ronald Reagan in 1984—has won the popular vote by more than 10 percentage points. 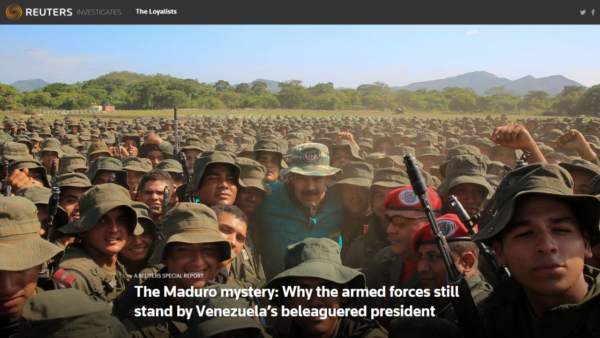 Reuters (7/28/19) ponders the “mystery” of why Venezuela’s military hasn’t overthrown the elected government.

But Reuters has a history of lamenting that Venezuela’s military is more loyal to its democratically elected government than the US empire. In another report pondering why the Venezuelan military remains loyal to Maduro and the Socialist Party, Reuters (7/28/19) complained that the Socialists took steps to prevent another coup like the one that temporarily removed Hugo Chávez from power before he was restored by popular support. The piece by Brian Ellsworth and Mayela Armas also criticized the Venezuelan military for assisting in public works programs like refurbishing schools, filling potholes, planting vegetables and clearing garbage; apparently a proper military spends its time preparing to invade other countries.

Reuters (8/22/19) has also presented Venezuelan efforts to prevent a military coup, such as removing disloyal officers, as sinister Cuban-inspired “repression” that has “cowed” the military. “Opposition pleas for a military rebellion have gone unheeded,” as reporter Angus Berwick lamented.

The Daily Beast’s report  “Evo Morales Is Out. Is Nicolás Maduro Next?” (11/13/19) likewise bemoaned the lack of a “domino effect” that would bring a Bolivian-style coup to Venezuela. The Beast’s Eduard Freisler acknowledged:

In Bolivia, it was largely the Bolivian army that forced Evo Morales out. This was the strategy that Venezuelan opposition leader Juan Guaidó tried in order to force Maduro out. But the young leader, who in late January proclaimed himself the interim president here, has never managed to sway the powerful and affluent generals to his side and away from Maduro.

The Daily Beast described Morales as “one of several presidents in Latin America who have claimed to represent the masses in their countries…sometimes helping to raise them from poverty, sometimes plunging them back into it.” The role of US sanctions in punishing the economies of countries that stray from Washington’s agenda was, of course, never mentioned in either of these reports (FAIR.org, 5/6/19)—as the Beast complained that “concerted economic and political pressure from the United States couldn’t shake” elected left-wing governments in Venezuela, Bolivia and Nicaragua. Neither do these reports mention CEPR’s relevant findings that recognition of Guaidó as Venezuela’s “legitimate president” effectively functions as a devastating oil embargo on the country. 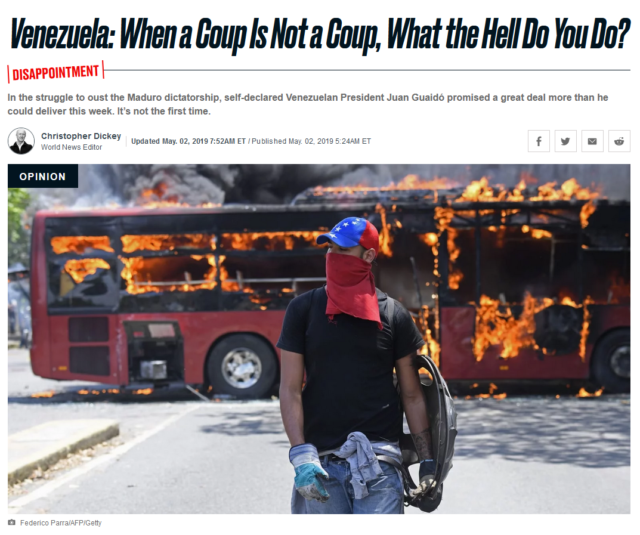 After a “classic military coup” failed to materialize in Venezuela, the Daily Beast (5/2/19)wondered, “How many more disappointments can the Venezuelan people stand?”

Reuters, the Daily Beast also has a history of mourning the improbability of the Venezuelan people and military’s supporting a US-backed coup. An earlier piece by Christopher Dickey (Daily Beast, 5/2/19) mourned the failure of Guaidó to convince the military to overthrow Venezuela’s government, claiming, that “a classic military coup, a quick and decisive golpe de Estado, would have been welcomed by many, and probably most, after years of suffering under Maduro.” Dickey also asserted that “no doubt some Venezuelans would welcome US military intervention,” though he thought that was unlikely. “How many more disappointments can the Venezuelan people stand?” he concluded.

It’s not accidental that both outlets downplayed the fact that a US-supported coup had occurred in Bolivia by acting as if only defiant left-wing governments in Latin America deem what happened in Bolivia to be a coup. Reuters (11/11/19) cited “leftist governments saying [Morales] was victim of a coup,” while the Beast (11/13/19) reported that “Chavista party members…termed Morales’ demise a coup,” even though both reports openly acknowledge, and indeed celebrate, the Bolivian military’s role in forcing Morales out (FAIR.org, 11/11/19). Section 508 of the Foreign Assistance Act requires that the US must cut off aid to any country “whose duly elected head of government is deposed by military coup or decree.”

FAIR has documented how corporate media consistently criticize the success of left-wing political agendas pursued abroad in countries like Venezuela and Bolivia—in defiance of US imperialism—because they are afraid of the threat of a good example (FAIR.org, 2/8/19). That might be why corporate media are wondering why Venezuela can’t be more like Bolivia in calling for a repeat coup there—which they won’t call a coup, of course.