Media’s Wildly Different Take On Unrest In Tunisia And Iran

TUNIS, TUNISIA — As the new year began, social media and corporate-owned news organizations alike were giving the protests in Iran constant coverage, despite the fact that the protests were relatively small in size and motivated primarily by economics — not politics, as many popular news outlets had claimed. Not surprisingly, these same organizations failed to mention the role of sanctions backed by the West in fomenting the economic troubles facing Iranians.

Soon after — despite U.S. encouragement and financial backing, as well as the key role of the U.S.-trained, Iran-based terrorist group MEK, in fomenting the unrest — the protests in Iran fizzled. It was difficult to know this if one relied exclusively upon corporate media reports, which claimed that the protests were growing by the minute, in some cases using images of past protests from other countries, such as Bahrain and Argentina, and even scenes from movies to support a narrative completely divorced from reality.

Media reports also falsely claimed that the protests attracted thousands of participants while local media and actual video evidence from the protests show much smaller gatherings that — given Iran’s population of 80 million — were insignificant in many cases. The dissolution of the protests understandably left those eager for an excuse to meddle in Iranian affairs, namely the U.S. and Israel, utterly disappointed.

Iran vs. Tunisia protests: the tale of the tape

Protesters take the streets during anti-government protests, in Tebourba, south of the Tunisian capital, Tunis, Jan. 9, 2018. Tunisia’s prime minister promised to crack down on rioters after violent protests over price hikes raised fears of broader unrest in the country that was the birthplace of the Arab Spring. (AP/Anis Ben Ali)

Just as the protests in Iran began to sputter, new protests sprang to life last week — this time in Tunisia. Since Monday night, those protests have escalated significantly and have attracted thousands, despite a violent state response. Unlike those that took place in Iran, the turnout has been continuous, significant and concentrated despite the country’s relatively small size.

To compare, by the fifth day of the protests in Iran, there were demonstrations — many of them numbering less than a hundred — in 24 cities, while after five days the protests in Tunisia have appeared in at least 18 towns. To put these numbers in context, Iran is 10 times larger geographically with a population nearly eight times larger than that of Tunisia. Since the protests began in earnest, there have been six days of demonstrations, which have culminated in violent clashes with Tunisian security forces and hundreds of arrests.

Human rights advocates have called the government’s crackdown both indiscriminate and inexplicably violent, as government forces have arrested many non-violent protesters while ignoring looters and vandals. Heba Morayef, Amnesty International’s Regional Director for the Middle East and North Africa, stated:

The Tunisian authorities are targeting people for peacefully exercising their right to freedom of expression and assembly. […] Unrest on Tunisia’s streets must not give the police a green light to retaliate with the unlawful or excessive use of force.”

Tunisia’s close relationship with the United States, as well as its key importance as a U.S. military base of operations in Africa, are likely to blame for the media’s lack of interest in the widespread demonstrations. 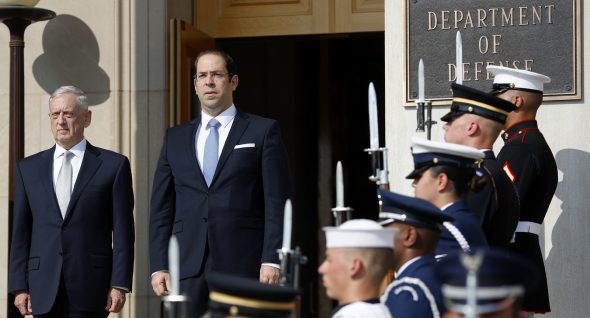 The U.S. military has long had a presence in Tunisia, particularly during the regime of the formerly U.S.-backed dictator Zine El Abidine Ben Ali, who was overthrown in 2011 during the Arab Spring. Since then, Tunisia has had no less than nine governments, most of which have continued many of Ben Ali’s policies, including cooperation with the U.S. military and the perpetuation of its police state.

However, increased U.S. military cooperation with Tunisia began in earnest in 2015, that April, the U.S. announced it would triple its military aid to Tunisia, which was followed by Barack Obama’s declaration of Tunisia as a major non-NATO ally a month later during a visit from Tunisian president Beji Caid Essebsi. Essebsi and Obama also signed a “memorandum of understanding” during that visit, which would lay the groundwork for Tunisia to become a key part of U.S. military operations in Africa.

In the latter part of 2015, then-Secretary of State John Kerry participated in dialogue sessions between the two countries, sessions which – according to documents leaked to Tunisian media – led the Tunisian government to agree to host an unknown number of U.S. troops within its borders. The content of the agreements made during this time has yet to be made public, leading some to assert that Essebsi’s government was hiding something. A year later, this proved to be true as, despite denying that he had allowed the U.S. access to Tunisian military bases, Essebsi later confirmed that this was the case — after The Washington Post reported that the U.S. had begun using a still unidentified Tunisian military base in June of last year as a base of operations for drones deployed to neighboring Libya.

As geopolitical analyst Martin Berger noted at the time, Tunisia was “gradually evolving into the most reliable partner in the North Africa region” for the United States. U.S. Secretary of Defense James Mattis’ visit to Tunisia last November suggested that this evolution was nearly complete, as he called for even greater defense cooperation between the two countries.

Thus, the current unrest could potentially jeopardize the U.S.’ “strategic interest” in Tunisia, especially if the current protests were to translate into regime change or major reforms enacted by the current government. Several reports from recent years have indicated that Tunisians overwhelmingly are opposed to the U.S. presence in their country and that the continued U.S. military presence could foment unrest against the current U.S.-friendly administration of Essebsi.

A free pass to crack down on protests 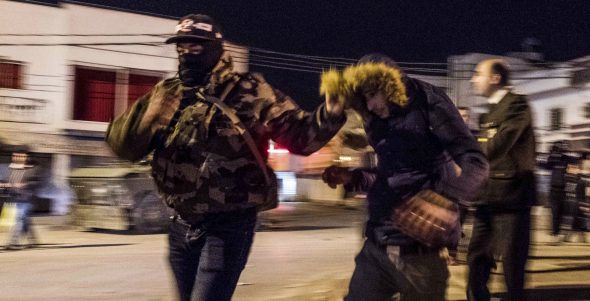 A riot policeman drags away a demonstrator during anti-government protests in Tunis, Tunisia, Jan. 10, 2018. Tunisian authorities say 237 people were arrested and dozens of others injured across the country in recent days as violent protests against government-imposed price hikes spread to more cities and regions. (AP/Amine Landoulsi)

Another reason for the media’s silence on the protests in Tunisia is a result of the driving force behind the country’s latest austerity budget. The austerity measures or “reforms” are a result of the demands of the International Monetary Fund (IMF) and the European Union, which were responsible for lending the Tunisian government $2.9 billion in 2015, nearly all of which was used to pay off the country’s already massive debts to international banks.

The unsustainable practice of taking out predatory IMF loans and accruing more debt to pay off existing debt has played out across numerous countries — a prime example being Greece — in recent years, forcing countries to adopt neoliberal and often unpopular reforms in order to satisfy their lenders. As a result, Tunisia’s leadership is in the difficult position of choosing to maintain austerity measures, risking increased unrest, or to ax them and risk angering the country’s would-be masters in the West.

As is too often the case, if unrest takes place in a country allied with the United States, particularly militarily, the U.S. political establishment as well as the media, look the other way – no matter how brutal the crackdown.