Medical Madness: A Mother’s Choice Between A Child’s Care And Bankruptcy

Above Photo: Lindsay Clark gets a kiss from her daughter Lily outside their home in Aledo, Texas, on May 9, 2019., Photographs by Allison V. Smith for Vox

Her 2-year-old daughter Lily had gotten into a small bottle of the anti-nausea drug Dramamine.

“It had a child lock on it, but I caught her sitting there with a bunch of white stuff in her mouth,” Clark says. “I immediately swept her mouth with my finger, but I wasn’t sure how many pills she ate.”

Clark had to decide: Should she take Lily to the emergency room?

She called a poison control hotline and the answer was yes: A Dramamine overdose could lead to seizures. The little girl should be monitored. When Clark asked what doctors would likely do, she was told they would likely give her activated charcoal and possibly pump her stomach.

But Clark knew that the emergency room can be expensive. A few months earlier, she’d gone to the emergency after falling down her friend’s stairs. She ended up with a $1,200 bill that she still hadn’t paid.

“I’m weighing my options,” Clark says. “She could have a seizure at any moment. It felt terrible, as a parent, to be in the position of having to do that.”

Clark and her husband decided to give Lily some activated charcoal at home and drive to the emergency room. But they wouldn’t go inside. 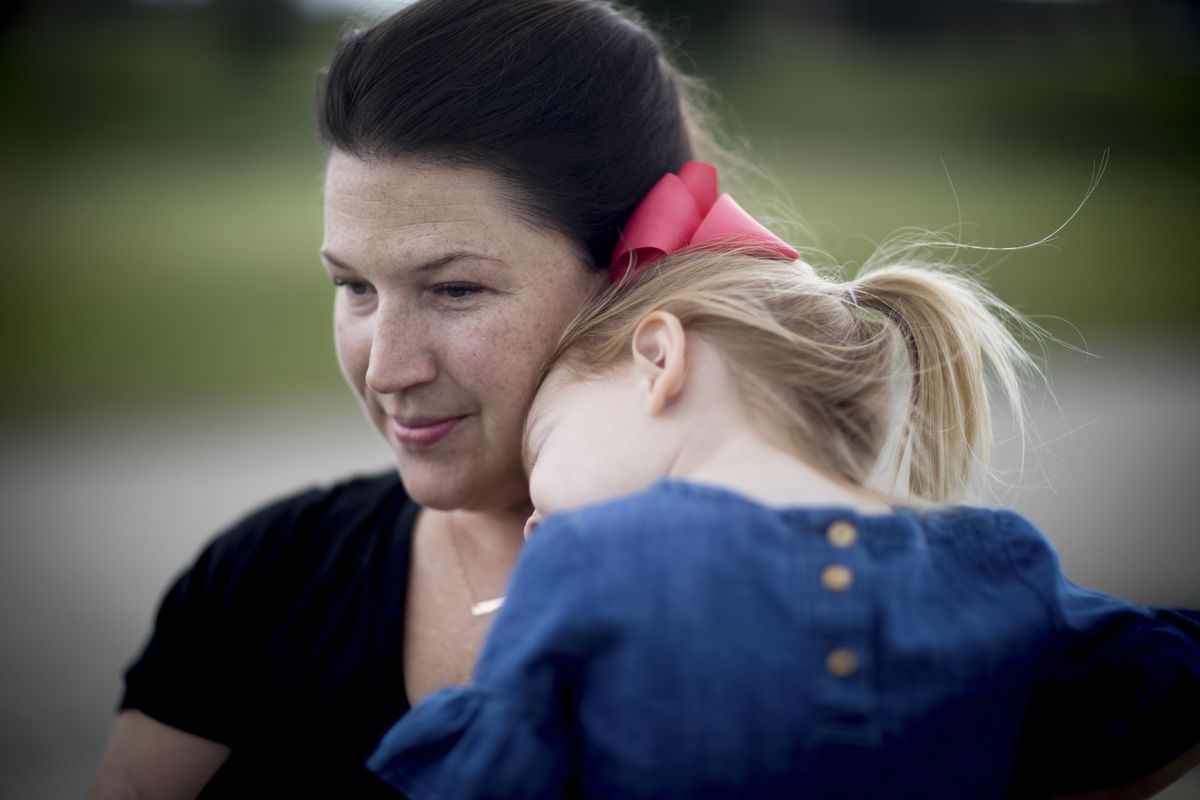 Lindsay Clark and her daughter Lily outside their home in Aledo, Texas. The Clarks have gone uninsured since 2017 due to the high costs of purchasing coverage.

Instead, they pulled their car into the second row of the parking lot, about 100 feet from the entrance. They start playing The Little Mermaid on the car’s TV screen for Lily to watch. And they waited.

“We were just sitting there, facing the door and watching Lily,” Clark says. “We chose the second row because we wanted to be close to the entrance, but also trying to look inconspicuous.”

The Clarks waited in the parking lot for a few hours, and Lily didn’t show any symptoms. They drove home without setting foot in the emergency room.

“I was sitting there thinking, am I a bad person?” Clark says. “I’m weighing my daughter’s life against how much the bill is going to cost.”

How rationing works in the United States

For more than a year, I’ve been investigating the opaque billing practices of emergency rooms in the United States. I’ve read more than 1,500 medical bills and talked with dozens of patients who sought care and ended up with a surprise bill, which range from a $629 charge for a Band-Aid to a $20,247 bill for a bicycle crash victim.

Many of these stories stuck with me. Large surprise medical bills can lead to financial ruin for typical patients with typical medical needs. But the Clarks’ story has stuck with me like no other. I can’t imagine the fear and worry these two parents felt watching their 2-year-old daughter in the back seat of the car, monitoring her for signs of seizures, instead of taking her inside the ER. 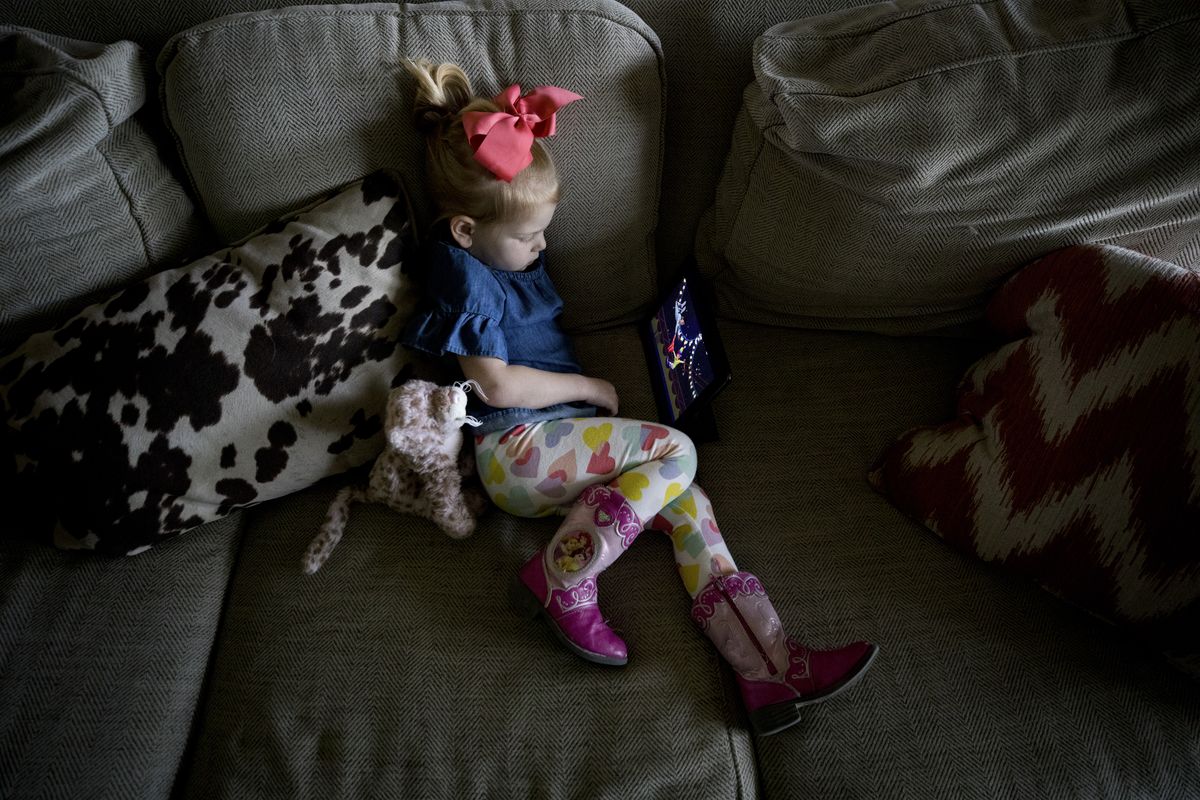 Lily Clark, 3, watches a movie in her home.

The story captures how sky-high medical bills shape patients’ lives. Not only do the bills put patients in overwhelming debt, but they also affect the health care decisions patients make.

A common refrain around debates about reforming the health care system is the idea of rationing. But rationing is already at work in the United States. There are those who can afford the care they and their families need, and those who can’t — because they worry about going broke from things like a single emergency room trip.

The Clarks aren’t alone. When I tweeted about their story, I heard from half a dozen other patients who said they’d made similar decisions or knew of patients who had.

Other families have waited in emergency parking lots and on curbs for fear of how much it would cost to step inside. Part of the problem is they just don’t know, even if they have insurance.

I’m a parent of a child with FPIES, a rare allergy syndrome that results in delayed onset of severe vomiting and dehydration that can suddenly overwhelm the body & result in shock.

We’re told to head to ER each time, but many FPIES parents park outside ER for this same reason.

My son did this with my granddaughter just last month. They had been sent to the ER by their pediatrician a few months earlier. Even with their top-level insurance plan, the bill was unbelievable. Almost $2000.

Something similar happened in my family about 9 years ago. We sat on the curb outside the emergency room in case the situation got so bad life was at risk. Otherwise, the bills would’ve crippled my parents. We’re the greatest country?

Emergency room physicians and hospital administrators I’ve interviewed have sometimes made the case that they need to keep their prices private so patients don’t make decisions based on cost. They worry, for example, about the patient who needs a lifesaving treatment but says no when they get the price tag.

But here’s the thing: Keeping prices secret has consequences, too. Because patients going to the emergency room generally know two things: The price will likely be high (as all American health prices are), and they won’t be able to know what their treatment costs in advance.

And that leads families like the Clarks to make the decision not to seek medical care, even when a poison control hotline is urging them to do so.

“When you walk into the emergency room, you’re walking into an unknown amount,” Clark says. “She should have health care, as a child. Children should not be put in these situations.”

One in five Texans are uninsured. The Clarks are among them.

For nearly all her life, Lindsay Clark had health insurance. But that changed in 2017 when she left her job at a large oil company to stay home with her two children.

Her husband’s employer, an HVAC repair company, did offer a plan to Clark and the kids. But the monthly premiums would cost hundreds, and it would come with a $5,000 deductible.

“We can’t really justify the premium, since we’re not usually going to spend the $5,000 we’d need for our insurance to kick in,” Clark says. “It doesn’t make sense to pay for a plan like that.”

Things on the individual market looked even worse: Family plans can have deductibles of upward of $14,000. Facing those options, the Clarks decided that Lindsay and her kids would go uninsured — which isn’t an especially uncommon choice in Texas, where they live. 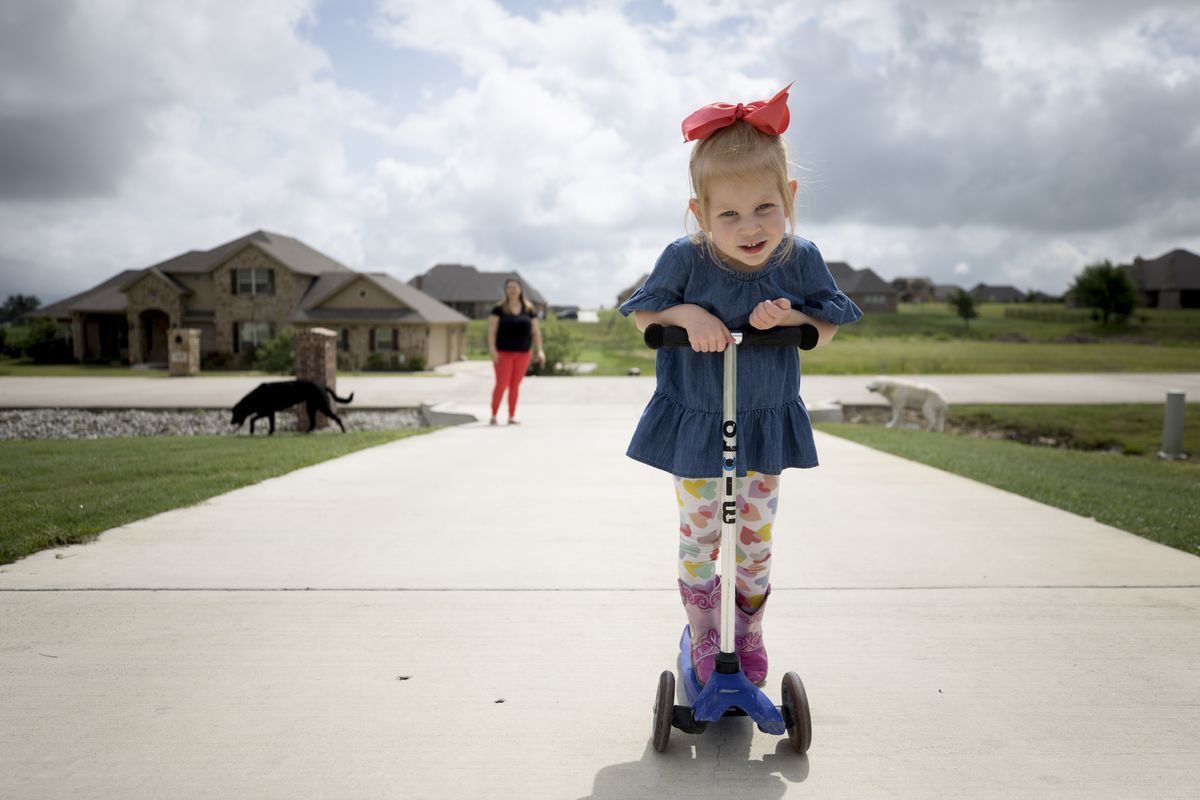 Lily Clark, 3, plays outside her home in Aledo, Texas.

Texas has the highest uninsured rate in the nation, with 20 percent of the non-elderly population going uninsured. That works out to nearly 5 million uninsured Texans like the Clarks.

When you look at just kids, the numbers are similarly dismal. Eleven percent of Texas children don’t have coverage, also the highest rate in the nation. 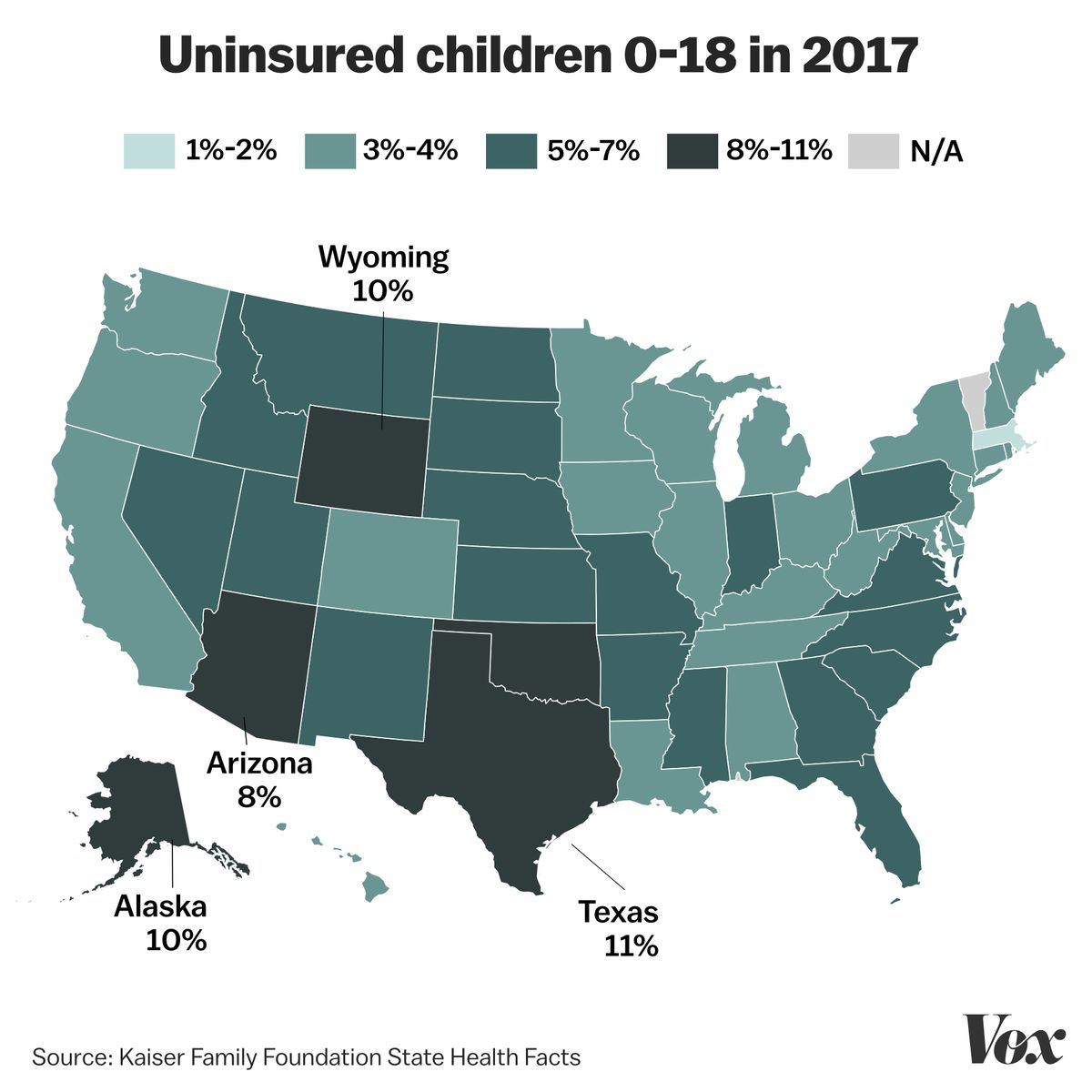 One reason Texas has such a high uninsured rate: It’s among the 14 states that do not participate in the Affordable Care Act’s Medicaid expansion. An estimated 1.1 million low-income Texans would qualify for coverage if the state did sign on to the program.

And for the Obamacare programs that do exist, the Trump administration has significantly cut outreach funding.

Clark quickly found that going without insurance was expensive, too. In April 2017, she fell down a friend’s stairs and hurt her ankle. She took a trip to the emergency room to get it checked out and ended up with a $1,459.10 bill for X-rays, some pain medication, and a walking boot.

She’d actually thought she had coverage then, but it turned out she had missed a month’s payment on her COBRA plan. “My mother had passed away unexpectedly, and I was caught up with the funeral planning,” she says.

After her daughter almost went to the emergency room, Clark did look into getting health coverage. But the numbers still didn’t add up, so she and her children remain uninsured today, nearly two years later.

“I know quite a few people who don’t have insurance,” she says. “We all make too much to qualify for Medicaid or get help from the government, but don’t make enough to afford coverage on our own. It’s this gap that we all sit in. And there isn’t a really clear way out.”

Last week, Congress held its first-ever hearing on single-payer health care. At that hearing, conservative health policy expert Grace-Marie Turner warned that universal coverage schemes like those in Canada and the United Kingdom use “rationing” in a way that “seriously compromises access to care.”

It is true that under universal systems, government boards have to make decisions about how to best allocate health care resources. Those decisions can be controversial, like when the United Kingdom decided not to cover a new cancer drug because it didn’t believe it was worth the money.

But make no mistake: Rationing is happening here in the United States; it just happens more quietly. It happens when 11 percent of Americans don’t take their prescription drugs as directed by their doctor in order to save money.

And it happened when the Clarks made the decision not to go into the emergency room because they were too worried about the bill.

Clark says that when she thinks back, she feels like she made the right decision for her family. But she still finds the experience upsetting, and wishes she never had to go through it in the first place. She wishes she lived in a place where she didn’t have to worry about how much health care costs, especially for children.

But right now, Texas — and the whole United States — isn’t that place.