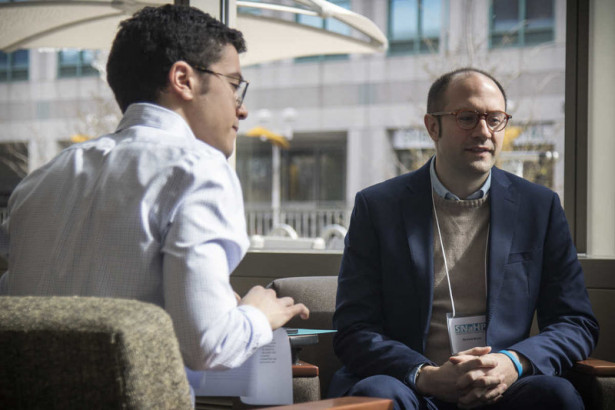 While political heavyweights in Washington slug it out over the merits of the Affordable Care Act (Obamacare) compared with its newly proposed replacement American Health Care Act (Trumpcare), a group of future doctors from across the country huddled Saturday in Philadelphia to advocate and strategize for an altogether different health insurance option.

Most of the 200 medical students who gathered at Temple University’s Lewis Katz School of Medicine building for the sixth annual summit of Students for a National Health Program (SNaHP) said they think Obamacare is inadequate because it leaves an estimated 26 million Americans without health insurance. As for Trumpcare, or AHCA, the students hated the Republican Party-backed bill and called it “unethical,” “extremely detrimental,” and “a step in the wrong direction.”

So, what’s the cure for America’s health-care woes? The answer is a single-payer system, members of SNaHP repeated in speeches, breakout sessions, and interviews during the daylong gathering.

We’re willing to take this to the halls of our medical schools, our nursing schools, the halls of Congress, and the streets of our cities to say we’re not going to stand for corporate America taking over our health-care system and holding patients hostage,” said Dr. Richard Bruno, 37, a founding member of SNaHP who specializes in primary care and public health in Baltimore.

The group meeting at Temple represents about a fifth of the 1,000 SNaHP members around the country.
In extolling a single-payer health-care system, Bruno noted a 2009 study by SNaHP’s 21,000-member parent group, Physicians for a National Health Program, that found that 44,000 Americans die annually because they lack health insurance.

“Obamacare has done a lot to reduce that number, but if we repeal it and replace it with this tragedy, this new bill, we’re going to go back to more and more unneeded suffering,” he said.

Under a single-payer system, the government would cover all citizens’ health-care costs rather than employers or individuals paying out of pocket. Many industrialized countries, including the United Kingdom, Australia, and Canada, have such systems, the medical students noted.
“There’s a lot of data that really kind of makes it obvious that it makes the most financial sense, just comparing the amount of money we spend per person in this country to how much is spent in other developed countries,” said Karim Sariahmed, 25, a Temple University second-year medical student from Morganville, N.J.

“We’re not healthier because we spend more. We’re about number 37 in terms of our health-care outcomes. So, the amount that we’re spending is not going to be providing quality care, it’s just going to line the pockets of health insurance CEOs and non-care related things,” Sariahmed said.

SNaHP estimates that a single-payer system that improves and expands traditional Medicare would save the nation $504 billion annually by reducing bureaucracy costs while covering all Americans.

“There are all these really great conservative arguments for single-payer because we spend up to about 19 percent of our GDP on health care, but we still have 30 million uninsured people,” said Vanessa Van Doren, 31, a Case Western Reserve University third-year medical student.

“With this Trumpcare coming out, it’s going to be tens of millions more people losing their insurance. For a developed, supposedly great country, that is totally unacceptable,” added Van Doren, who is from Boston.

Critics of a single-payer system, however, argue that such a system could result in total health-care costs rising and quality of care failing because of a lack of competition that exists now in the current multipayer system.

But Janine Petito, a Boston University fourth-year medical student, said advocating for a single-payer system is part of being a good doctor.

“I think guaranteeing that someone can go see a physician when they have a medical problem without fear of bankruptcy is critically important. I think a lot of folks delay care, skip care altogether, don’t get the preventive care that they need because they’re afraid of not being able to pay,” said Petito, 28, who is from Chappaqua, N.Y.

H. Matthew Moy, a 2016 graduate of the Rosalind Franklin University of Medicine and Science, said the Temple gathering empowers the medical students to work toward their shared goal of changing how health care is paid for.

“When you believe that health care is a human right, the only way to adequately and efficiently provide that for everybody is through a single-payer system, which won’t waste money with a middleman insurance company telling you where you need to go,” said Moy, a fellow at the Washington-based American Medical Student Association.