Maria Faría, the daughter of a would-be Hugo Chávez assassin, illegally barged into Venezuela’s embassy in Costa Rica and declared herself ambassador. The embarrassing stunt highlighted everything wrong with Juan Guaidó’s reality-show government.

While tweeting that she had taken charge of Venezuela’s Embassy in Costa Rica on February 20, Maria Faría demonstrated that she was more familiar with the conventions of social media than those dictating international diplomacy.

“In fulfillment of the diplomatic functions, assigned by President Juan Guaido”, tweeted Faría, referring to the US-appointed leader of Venezuela’s parallel coup government, “we assume control of the administrative headquarters of the Embassy of Venezuela in San Jose”.

The surprise announcement came early Wednesday morning from inside the Embassy, leading many to wonder how Faría, or “@Mandyfaria26” — who describes herself in her Twitter bio as the “Diplomatic Representative for the Venezuelan Republic” in Costa Rica — was able to secure access to the Embassy.

A senior Venezuelan official told the Grayzone that Faría and her entourage were able to access the building by paying its owner to hand over the keys.

Once inside, Faría seemed to believe she could tweet her way to legitimacy, just as the presidency of her boss, Juan Guaido, had been announced on Twitter by US President Donald Trump.

But getting her foot in the door would be the least of Faría’s challenges. Within hours the young diplomatic wannabe had managed to offend her host country and demonstrate her lack of qualifications for the job.

The fail-daughter of an exiled coup plotter, her clownish behavior was hardly unique to a government that existed only in cyberspace and the fever dreams of John Bolton. Beyond its illegal occupation of the Costa Rican embassy, Guaido’s gang had no Foreign Ministry, let alone any physical address to govern from.

A month into their shadow puppet government, the attempt to barge into the consular space exposed the desperation behind their search for legitimacy.

“Strong rejection of the performance of … María Faría”

Faria’s first day as the Twitter-proclaimed ambassador quickly deteriorated into a humiliating debacle.

Costa Rica might have recognized Guaido as President of Venezuela on January 23rd, but her brazen move took the country’s Foreign Ministry by surprise. Speaking to reporters, Costa Rican Vice Minister Lorena Aguilar announced that her office “deplored the unacceptable entry” into Venezuela’s Embassy in Costa Rica “by diplomatic personnel of the government of interim President Juan Guaidó.” Aguilar went on to express a “strong rejection of the performance of the diplomatic representative María Faría”.

In a letter to reporters, Faría’s staff apologized for cancelling a press conference scheduled for Wednesday afternoon, announcing she will spend Thursday discussing her unilateral takeover of the Embassy with Costa Rican Foreign Minister Manuel Ventura Robles. It was safe to assume the meeting would include a crash course in international law for the ambitious social media diplomat.

When Venezuelan diplomats representing Maduro’s government arrived at the embassy on Wednesday, they were greeted by a swarm of opposition supporters blocking its entrance. Several videos posted on social media showed crowds angrily clashing with the dignitaries as they attempted to enter their workplace and perform official duties.

The ghosts of terrorist past

Multiple journalists took to social media to note that two of the men who led the attack on the embassy appeared to be the sons of Eduardo Manuitt, the former governor of Guarico state in Venezuela. Manuitt is a former Chavista who turned against the movement after the United Socialist Party of Venezuela refused to support his daughter’s efforts to succeed him as governor. He had been in hiding since 2009 in order to avoid an arrest warrant over corruption charges alleging he pocketed government funds while in office. 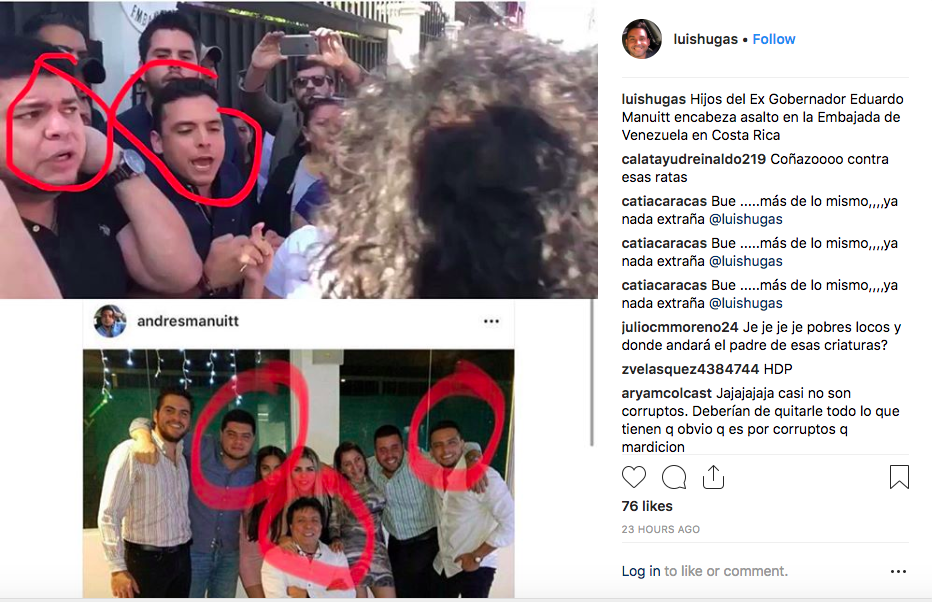 But the Manuitt boys were not the only children of shady characters involved in storming Venezuela’s Embassy in Costa Rica. In fact, the new “diplomatic representative” Faría hails from a family of failed coup plotters.

In 2005, Faría’s father, retired National Guard Colonel Jesus Faría Rodriguez, was sentenced to nine years in prison for his involvement in the Daktari Farm case, a foiled plot to attack the military and assassinate then-President Hugo Chavez with Colombian paramilitary men disguised in Venezuelan military garb. Colonel Faría’s brother, Dario, and nephew, Rafael, were also sentenced in the case.

In 2006, the elder Faría miraculously escaped from prison, along with Dario and Rafael. A Denver Post article from that year features a photograph of young Maria Faría bearing a poster calling for her father and his relatives to be freed. 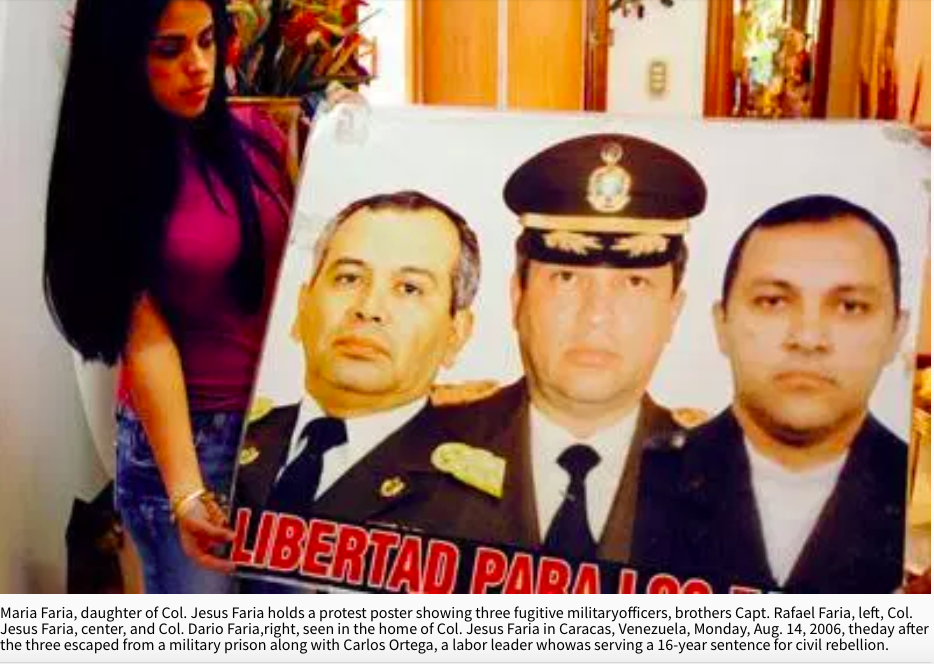 Thirteen years later, she would join in the family tradition of clumsily botched attempts at sedition.

Little is known about what qualified Maria to represent the Venezuelan people from San Jose, or about her professional career at all. An article published in El Nacional at the time of her father’s prison escape revealed that the colonel had “three children: two boys and a female who has just graduated as an accountant”.

The Faría family virtually disappeared from the public eye after the prison break. In fact, Maria only posted her first Instagram photo on February 1st, weeks after Washington’s coup attempt was underway.

Instagram posts she published since that day combine gushing pro-Guaido sentiment with right-wing talking points about US humanitarian aid and photos of a woman who appears desperate to look the part of an international power-player. Her ambitions culminated with her Twitter proclamation of control over the Venezuelan Embassy in Costa Rica. But then reality set in.

According to Costa Rica’s Vice Foreign Minister, Faría’s entry to the Embassy “injures elementary diplomatic norms of respect and trust in relations in the international community, and above all, in international law.”

These words perfectly summed up the whole absurd spectacle of the Washington backed coup attempt.

While Guaido may have fooled some when declaring himself president from the streets of Caracas, Faria learned the hard way that it would take more than social media optics campaigns and bribery to declare herself a diplomat. But within Guaido’s right-wing gaggle, there seems to be little interest in the rule of law. It is a collection of unknown backbenchers, amateurs, and elite hooligans that equate Twitter proclamations with governmental legitimacy.

At least in this respect, Faria is the perfect representative.