Meet Noah, The Circular Car Of The Future

Above Photo: © courtesy of TU/ecomotive

An economy with a closed loop, where everything we use is part of a circle where each component can be reused, is going to be an essential component of the new economy. Humans are using resources at a faster rate than the earth can produce them. This car is an example of people beginning to think about the closed loop circle of reuse. KZ

Meet Noah. This lightweight plug-in electric city car scoots two people and their stuff around for up to 149 miles (240 km) on a single charge and can reach speeds of 68 miles per hour (110 km/hr). But that’s mundane.

What makes Noah special is the circle. The circle represents the complete closure of the materials life cycle: the only materials used in a product can be recycled, ideally back into the same product or a product of similar position in the value chain (as opposed to down-cycling in which materials are re-used in products of inferior quality or value).

Noah’s chassis was made without any traditional plastic and without metal. Instead, the engineers relied on sandwich panels of the natural fiber flax and a biopolymer made from sugar, Lumina PLA. The car was sponsored by the French petrochemical giant TOTAL, the supplier of Lumina PLA, and conceived by the ecomotive team at the Technical University of Eindhoven. 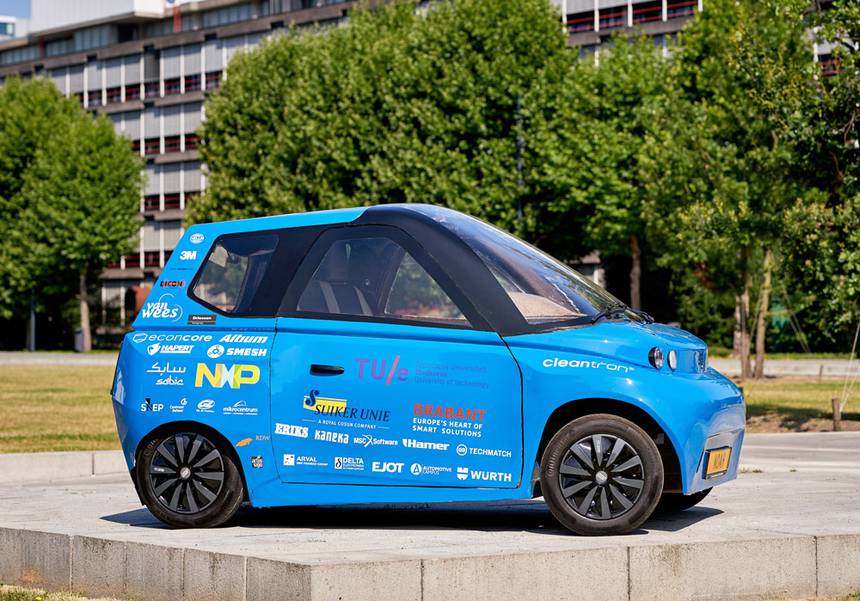 Noah weighs in at a svelte 794 pounds (360 kg) without its batteries, is reported to have a “spacious” trunk, and according to the news release by TU/ecomotive:

“The complete drivetrain has been optimized and with a gearbox called “Smesh Gear” which will reach an efficiency of 97% (!) during acceleration and even a 100% efficiency at constant speeds, this makes the entire drivetrain of Noah incredibly energy efficient. The electromotors are powered by six modular batteries that enable easy battery swapping and the possibility to gradually introduce better battery technology when available. For Noah to be future ready he is equipped with NFC scanners in the doors which make him perfect for carsharing. With this NFC scanner, the door can be opened by any mobile device, Noah will immediately recognize the user and set the car to his or her personal preferences.”

It is questionable whether design aspects such as NFC scanners also count to the closing of the circle in Noah’s materials life cycle, which may mean there is still a lot of work to be done. But at least Noah demonstrates the possibility to have the entire chassis of the car produced from just two natural materials, which also makes it easy to separate from the vehicle and recycle at the end of its life – a life that can be extended by such forward-looking concepts as swappable batteries.

For now Noah can be found on tour, making visits to car manufacturers, suppliers, and universities in cities across Europe as an ambassador for the technology of the future.