Above Photo: Relatives of Palestinian Muhammed al-Sadiq, 21, mourn at the family home during his funeral in Gaza City, Sept. 25, 2018. Al-sadiq was killed and at least 10 others wounded by Israeli soldiers during a protest near in Gaza. Khalil Hamra | AP

“The Israeli military relies on a network of international companies, supplying everything from sniper rifles to tear gas, to carry out its massacres of protesters in Gaza. These companies are knowingly supporting war crimes, and are complicit in state-orchestrated murder.” — Tom Anderson, researcher for Corporate Occupation

NEW YORK — As Israeli soldiers gun down unarmed Palestinian demonstrators in the Great March of Return, their lethal operations depend on an array of contractors and suppliers, many of them companies based outside Israel.

“The Israeli military relies on a network of international companies, supplying everything from sniper rifles to tear gas, to carry out its massacres of protesters in Gaza,” Tom Anderson, a researcher for Corporate Occupation, told MintPress News. “These companies are knowingly supporting war crimes, and are complicit in state-orchestrated murder.”

Since the mobilization began on March 30, Israeli forces have killed 205 Palestinians in the Gaza Strip, the United Nations’ Office for the Coordination of Humanitarian Affairs in the Occupied Palestinian Territory reported on October 4.

There have been 21,288 injured, including 5,345 from live ammunition, resulting in 11,180 hospitalizations. Thirty-eight of the dead and 4,250 of the wounded were children.

A press release accompanying a September 25 report by the World Bank warned, “The economy in Gaza is collapsing,” adding that “the decade-long blockade is the core issue.”

Here are a few of them:

Caterpillar is known internationally for Israel’s use of its bulldozers to demolish Palestinian homes in the occupied West Bank and inside Israel itself, as well as for its role in the killing of Rachel Corrie, an International Solidarity Movement activist from the United States, who was crushed to death by one of the company’s Israel-operated machines in the southern Gaza Strip on March 16, 2003. In Gaza, Caterpillar is notorious for Israel’s deployment of its equipment to reinforce a military barrier around the Strip, as well as to level Palestinian farmland inside it. These leveling operations both destroy Palestinian agriculture, keeping Gaza a captive market for Israeli producers, and maintain a clear line of fire for Israeli soldiers to shoot Palestinians. 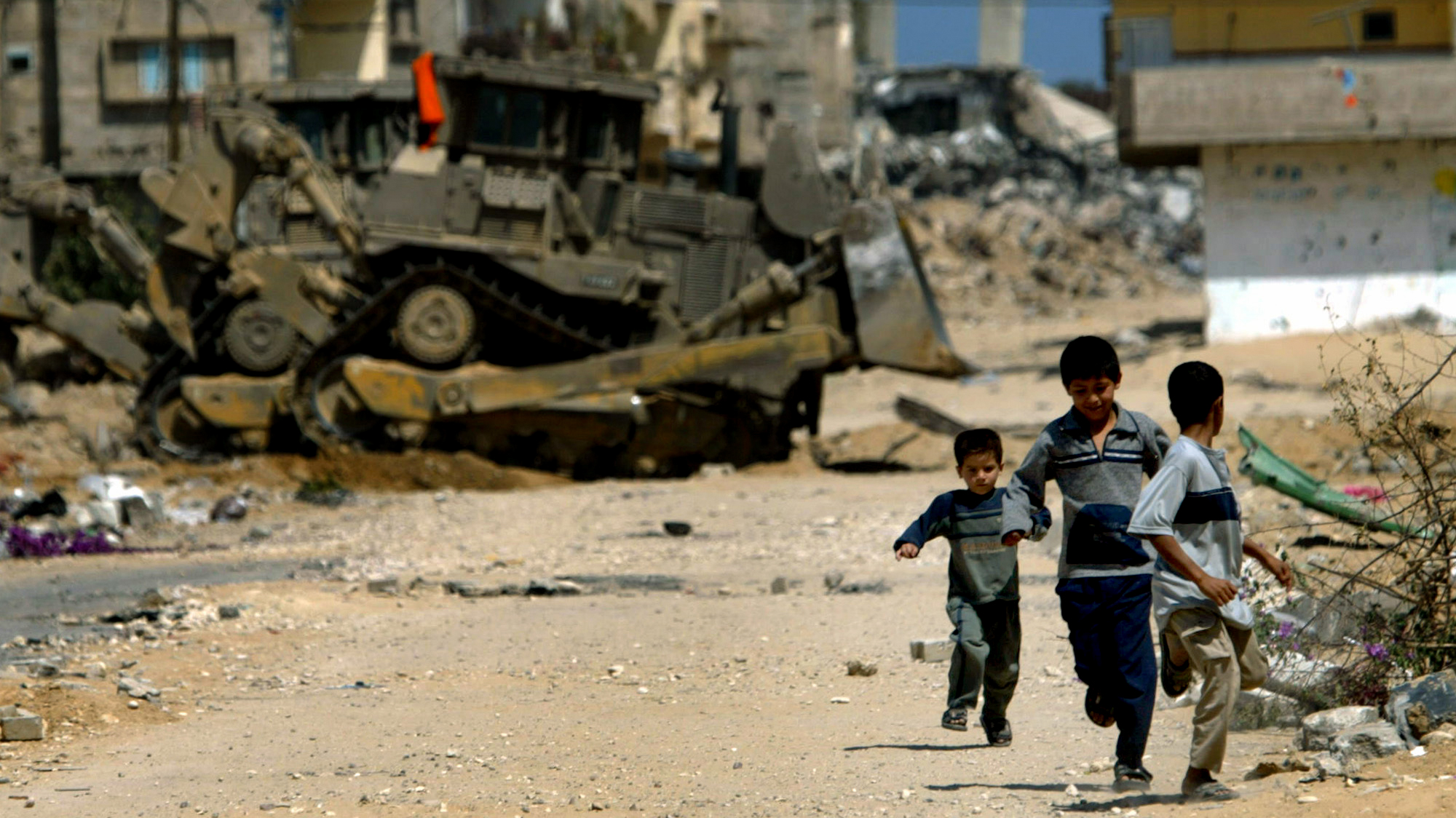 Children run for cover as Israeli army D-9 Caterpillar bulldozers as they demolish homes in the Rafah refugee camp in the southern Gaza, May 23, 2004. Lefteris Pitarakis | AP

Combined Systems — a Jamestown, Pennsylvania-based manufacturer owned by Point Lookout Capital and the Carlyle Group — supplies light weaponry and security equipment, such as tear gas and flash grenades, to repressive governments worldwide. In May, Corporate Occupation researchers spotted an Israeli vehicle, with police markings but obviously intended for military use, equipped with the company’s ‘Venom’ tear gas launcher next to the Gaza barrier.

While other manufacturers, like General Motors, also provide vehicles used by the Israeli army to deploy its soldiers along the Gaza barrier, Ford’s are distinctive for their creative use. In 2003, Israeli vehicle manufacturer Hatehof began retrofitting Ford F550 trucks as armored personnel carriers. By 2016, Israel had moved on to F350s, modified by Israeli military electronics company Elbit Systems as autonomous unmanned vehicles capable of remotely controlled fire. 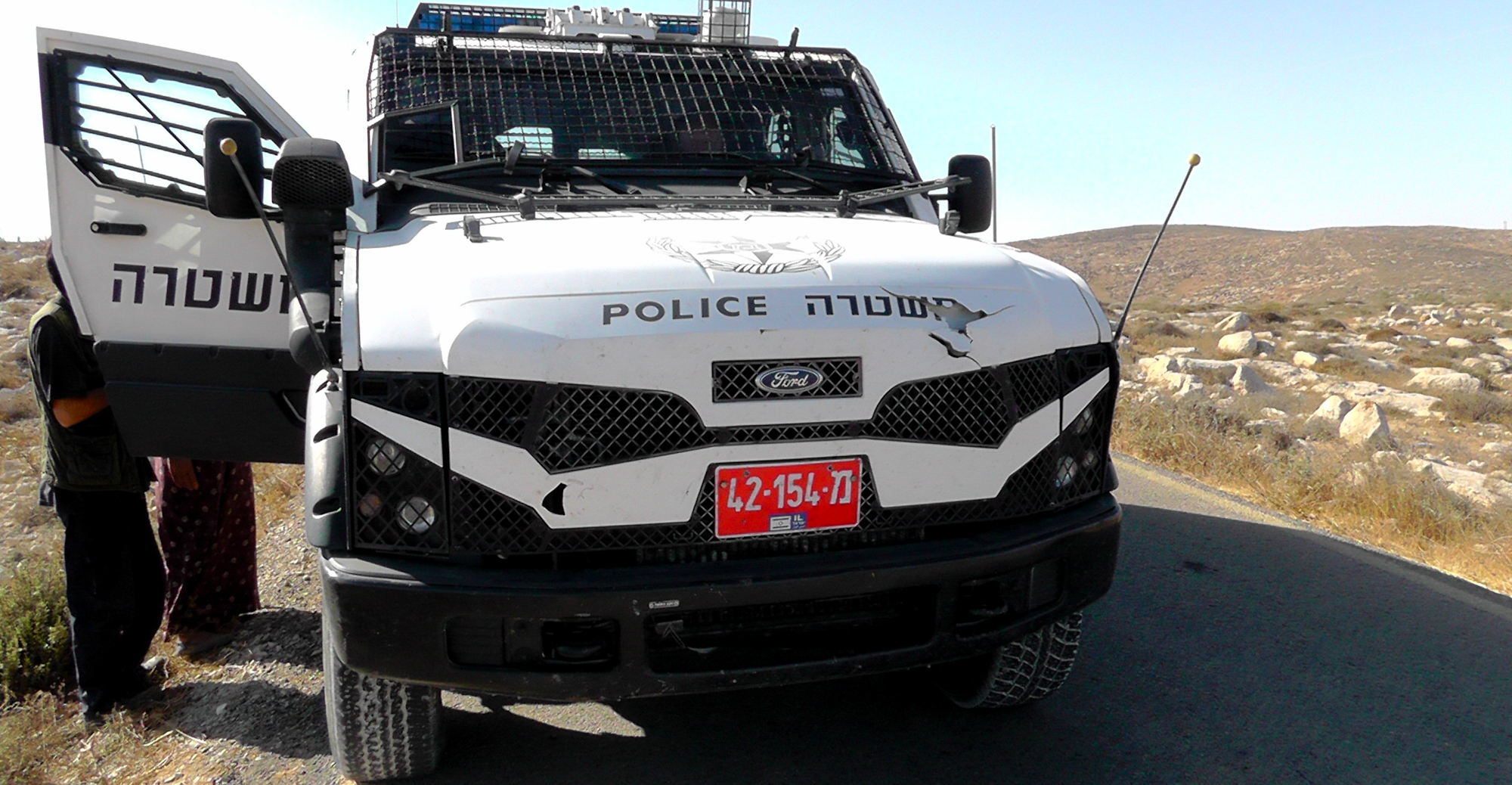 A modified Ford vehicle belonging to Israeli police blocks Palestinian shepherds from accessing their land near a Jewish settlement in Hebron. Photo | Ta’ayush

Along with herbicides from the Dow Chemical Company and ADAMA Agricultural Solutions, an Israeli unit of China’s state-owned National Chemical Corporation (ChemChina), Israel sprays Bayer subsidiary Monsanto’s notorious Glyphosate (marketed as Roundup), a known human carcinogen, on Palestinian fields across its military barrier with Gaza several times annually. As does its deployment of Caterpillar bulldozers to level the same fields, the aerial application, conducted by two civilian Israeli companies under contract to the army, serves both Israeli economic and military interests — preventing Palestinian self-sufficiency in agriculture, while allowing its forces to easily detect and fire upon Palestinian farmers and other civilians using their own land.

Formerly one of Israel’s biggest occupation contractors, G4S sold its major Israeli subsidiary, G4S Israel, in 2016, but kept a stake in the construction and operation of Policity, Israel’s privatized national police academy. Israel claims that its police enjoy civilian status, but routinely deploys them in military operations against Palestinians in both the West Bank and the Gaza Strip, including their use of both Combined System’s ‘Venon’ tear-gas launcher and weaponized drones to repress the Great March of Return. 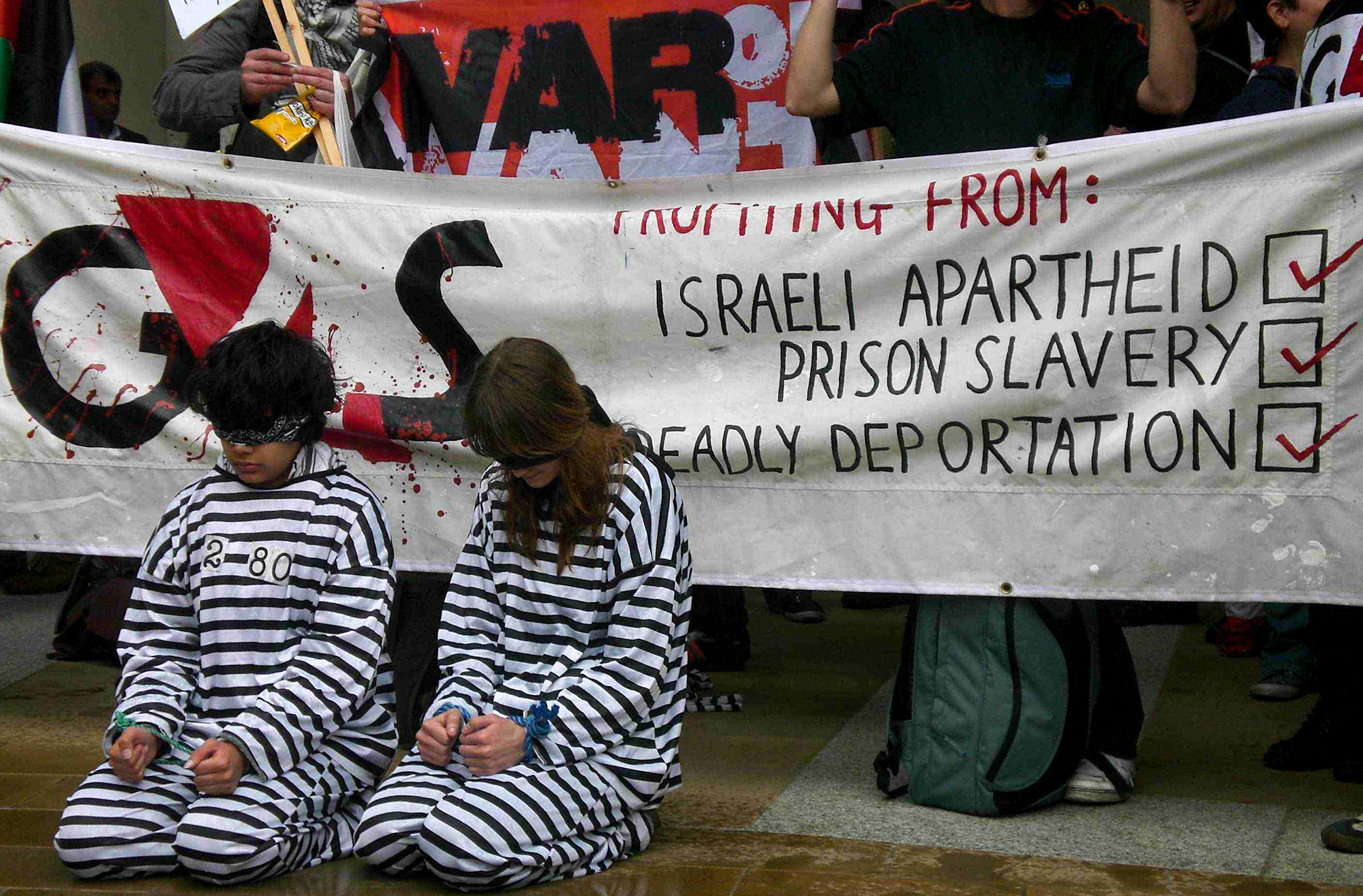 Now three companies with interlocking operations — HP Inc., Hewlett Packard Enterprise (HPE), and DXC Technology — HP equips the Israeli military with computers and has undertaken contracts to “virtualize” IDF operations, starting in 2007 with a pilot program for the Israeli navy, which enforces the blockade of Gaza.

HSBC provides extensive financing to some of the most notorious military manufacturers in the world, several of them Israeli.

“HSBC holds over £800m worth of shares in, and is involved in syndicated loans worth over £19b to, companies that sell weapons and military equipment to the Israeli government,” Huda Ammori, campaigns officer for the Palestine Solidarity Campaign, told MintPress. “These investments include Elbit Systems, Israel’s largest private security firm, which markets its weapons as ‘field-tested,’ due to them being tested on Palestinian civilians in Gaza.”

A leading drone manufacturer, Elbit has played a key role in aerial attacks on the Great March of Return.

Motorola provides the encrypted smartphones the Israeli military uses to deploy soldiers, as well as radio and communications services for the Israeli police.

Among casualties of the Great March of Return, Amnesty International reports, some “wounds bear the hallmarks of U.S.-manufactured M24 Remington sniper rifles shooting 7.62mm hunting ammunition, which expand and mushroom inside the body,” along with others indicative of Israel Weapon Industries’ Tavor rifles. “In the United States this is sold as a hunting rifle to kill deer,” Brian Castner, a weapons specialist for the human-rights organization, said in April.

The White Plains, New York-based food manufacturer, co-owned by PepsiCo and Israeli foodmaker Strauss, has donated food packages to the Israeli Army’s Golani Brigade, notorious for its human-rights abuses in both Gaza and the West Bank.

“We must channel our rage”

As the Great March of Return, now in its 29th week, continues, participants and supporters say targeting firms complicit in its repression is one of the most effective means of solidarity.

“We must channel our rage at Israel’s atrocities into effective actions to hold Israel accountable,” the BDS National Committee said in a statement on April 12. “Together, we can escalate Boycott, Divestment and Sanctions (BDS) campaigns.”

“Israel is meeting the Palestinian protesters with live fire, massacring over 190 Palestinians to date,” Ammori told MintPress. “Israel’s racist discrimination and brutal violence is evident, and the campaign to end complicity is vital.”