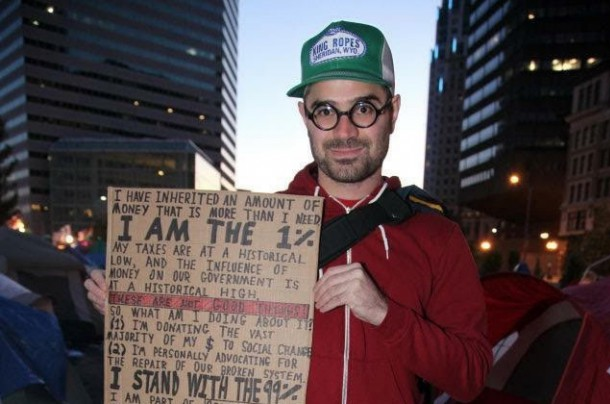 In a political and economic system seemingly tailor-made for the 1 percent, backlash against “wealth therapy” — the trend of moneyed Americans seeking counsel through their Occupy-induced feeling of shame and isolation — is well-placed. While the top 0.1 percent of families in the United States possess as much wealth as the bottom 90 percent, money psychologist Jamie Traege-Muney moaned to The Guardian that the movement wrongly “singled out the 1 percent and painted them globally as something negative.”

But a growing cadre of this statistical owning class are now crafting a healthier relationship to the rabble at their doorstep. Responding to Occupy and other movement moments, young people with wealth are organizing the resources of their peers and families to level the playing field — and support one another in the process.

“It’s not that I disagree that having wealth in this society is uncomfortable,” said organizer and donor Farhad Ebrahimi. “But treating it is not about individual therapy or even engaging in philanthropy or charity. It’s about collective action.” As a teenager, Ebrahimi was gifted a pool of wealth from his high-tech entrepreneur father. Growing up Iranian-American during the Iran-Iraq war was part of a “perfect storm” that led him to punk rock and radical politics, though for years Ebrahimi continued to identify more as a musician than an organizer. It was only later that he would conjoin his background with his beliefs.

“I wasn’t even 100 percent sure they were compatible at first,” he explained. “I approached philanthropy pretty agnostically in the beginning.” Shortly after graduating from MIT in 2002, Ebrahimi founded the Chorus Foundation using $25 million of his personal money. Focused on funding projects to address climate change, Chorus is dedicated to “working for a just transition to a regenerative economy in the United States.” And unlike other foundations, Chorus has a built-in expiration date: intending to spend out the entirety of its — and Ebrahimi’s — reserves by 2024. While he expects another gift from his father at some point in the future, he says it will go toward a “Chorus Foundation Round Two” with the same goal.

“I’m trying to put myself out of business,” Ebrahimi said. “And I’m trying to create a world in which someone would not end up in my situation of having been gifted more money than I possibly know what to do with.”

Andrew Carnegie’s “Gospel of Wealth,” a bible of sorts for modern philanthropists, was penned at the height of the Gilded Age in 1889. Observing the continued accumulation and stratification of wealth that surrounded him, Carnegie declared it “a waste of time to criticize the inevitable,” seeing inequality — not unlike the contemporary economist Thomas Piketty — as a structural outcome of capitalism. He scorned the “socialists or anarchists who seek to overturn present conditions,” arguing that their plight “is to be regarded as attacking the foundation upon which civilization itself rests.” Much like Hillary Clinton did in last week’s Democratic debate, Carnegie argued that the wealthy have to “save capitalism from itself,” ameliorating its worst excesses by choosing to redistribute their own surplus. In doing so, he called on his fellow industrialists to “consider how the foundation, as one of the [capitalist] system’s most prominent offspring, might act most wisely to strengthen and improve its progenitor.”

Organizer Abe Lateiner — who describes his giving as “spiritual and empowering work” — has a gospel that is noticeably distinct from Carnegie’s. Confronting the idea that society’s most well-off should pick which causes deserve funds, Lateiner warns that “Writing checks by yourself on New Year’s Eve is not liberating if you’re doing what you think is best — which is exactly what got us here.”

“The isolation thing is very real,” Lateiner said of his affluent bretheren seeking wealth therapy. “There are very specific, non-material, damaging things that come with privilege.” Excess resources, he explained, “are wonderful for our material well-being, but destroy the spirit [and] our ability to connect socially.”

Having grown up in a “solidly Democratic” household, Lateiner’s family never discussed money around the dinner table, and he struggled to explain his circumstances even to close friends. “My inability to talk about money or class on a personal level has definitely ruined relationships and cut off opportunities for relationships,” Lateiner said. “I mean that as friendships and romantic relationships and everything in between.” Having taught for six years — something he described as “the best way, within my liberal framework, I could think of to give back” — Lateiner came across an article in the New York Times in 2012 about young, socially conscious heirs, including Naomi Sobel and Resource Generation executive director Jessie Spector.

“The ground started to shift under my feet,” Lateiner remembered. Not only were Sobel and Spector speaking openly about their wealth and about giving it away; they were happy about it. He looked Resource Generation up online and quickly became involved. This collective organizing alternative to wealth therapy emerged from “being able to be with people who understand [the problems of having wealth] and can honor them to get past the guilt.” A national, chapter-based organization, Resource Generation serves as a space for both support and political education among young people with wealth. More recently, it has also become a platform for them to leverage resources toward “an equitable redistribution of land, wealth and power.” An initiative launched last year called “It Starts Today” collaborated with racial justice groups around the country to raise $1.4 million for the movement for black lives and other black-led organizing.

While Ebrahimi has worked with Resource Generation, he’s also been involved with the upstart funders’ network Solidaire, which looks to combine Resource Generation’s political analysis and support structures with a commitment to moving sizable resources toward burgeoning movements. Founded in the wake of Occupy in 2012, Solidaire’s grants have backed everything from the People’s Climate March to on-the-ground mobilizations in Ferguson, Missouri to work against the Trans-Pacific Partnership. Three classes of grants support movements at different stages in their development, be it in “movement moments” like Darren Wilson’s non-indictment, or building out long-term infrastructure for when reporters stop calling.

Apart from Solidaire, Ebrahimi also noted that Occupy marked a kind of sea change among more mainstream funders’ circles, who are now more open than ever to cross-issue conversations centered on justice. Black Lives Matter co-founder Alicia Garza, for instance, was invited to speak at the Environmental Grantmakers’ Association’s annual conference this year — a small step, but something Ebrahimi said would have been virtually unheard of just a few years ago.

Both Ebrahimi and Lateiner emphasized the importance of honesty when approaching movements as people with wealth. While he was involved in Occupy Boston, Ebrahimi walked around the Dewey Square encampment with a shirt bearing the words “I am the 1%… I stand with the 99%.”

“There was a time when I was scared that anybody with good politics would be inherently wary of somebody sitting on a pile of gifted money,” he recalled. But being clear about his background from the outset was met with more excitement than derision. Instead of worrying about being judged by his fellow occupiers, Ebrahimi “could focus on trying to support a political moment that I thought was important, making a bunch of new friends and having all sorts of crazy adventures. It really never had to be an elephant in the room that I was a rich kid with a foundation.”

Meanwhile, Lateiner has started dressing up rather than down in movement spaces, where being open about his wealth has enabled him to build trust with working class organizers. “I have to be careful about the way I choose to speak and behave in those spaces,” he said. “But I’m not going to deny who I am.”

While acknowledging the trials of extreme wealth, Lateiner, Ebrahimi and other forward-thinking heirs are turning to one another for support, not so-called money psychologists. They take solace, too, in putting their personal resources to work. “Under a scarcity mentality, we’re taught to see giving as losing something, rather than seeing it as getting to be part of justice,” Lateiner said. And for the wealthy, he added, being a part of justice means not getting to define it. “I think the best work happens when people who are funding it get the hell out of the way.”

For solutions, they turn to movements. As opposed to Carnegie, this new breed of philanthropists reject their so-called “obligations” to capitalism, and are eager to help build a fundamentally different economy. “When we respond to the crisis of income inequality, we’re really responding to the crisis of consolidated wealth,” Ebrahimi explained. “What that says to me is that we’re trying to create a world in which there is no radically consolidated wealth. Without that, you don’t have any foundations” — or, at least, any wealth therapists.