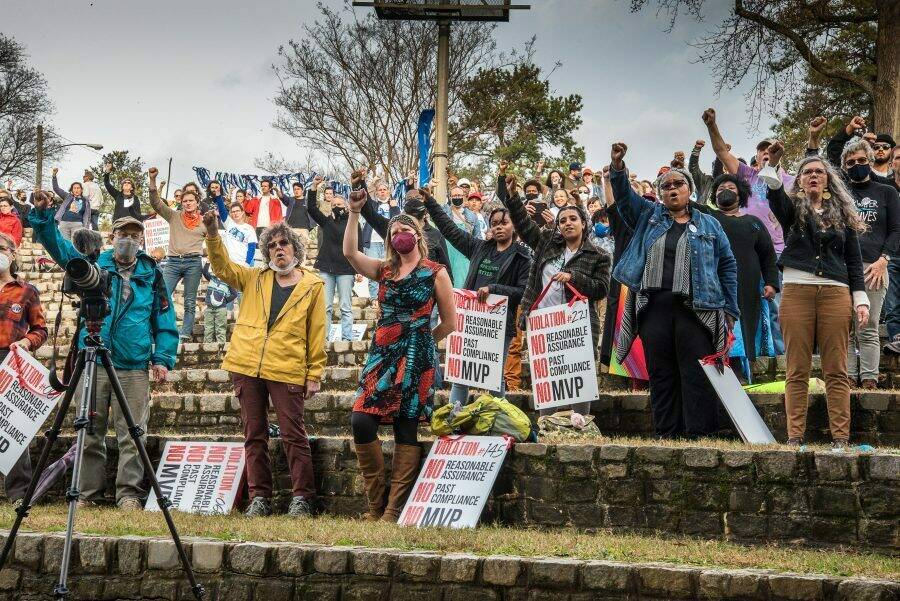 Meet The Appalachian Women Facing Down The Mountain Valley Pipeline

Above Photo: Mountain Valley Pipeline opponents rally in Richmond, Virginia on Dec. 11, 2021. Will Kerner Photography, Courtesy Of The Appalachian Voice.

Across Years And Several Southern States, These Organizers Have Helped Drive The Massive Gas Pipeline To The Brink Of Defeat.

I have met so many people through this fight,” says Nancy Bouldin of Monroe County, West Virginia. “If you look at any benefits of all this, it’s the people and the connections that have been made.”

When Bouldin says, “all this,” she refers to the years-long battle communities across West Virginia, Virginia, and North Carolina have waged against the Mountain Valley Pipeline and its proposed Southgate extension.

When Bouldin and fellow organizers Lynda Majors and Donna Pitt met for a discussion via Zoom in March of 2022, the MVP’s prospects seemed dim.

Originally priced at $3.7 billion, the MVP’s costs have ballooned to over $6.2 billion, the project is over three years behind schedule and has faced millions of dollars in fines for violations of clean water protections. A number of recent legal setbacks

have set the pipeline back further, but years of experience have made these organizers cautious.

“Victory is when they cancel the pipeline,” Majors says. “Until that happens, in my mind, there is no victory. We stay vigilant. And then [after the pipeline’s defeat,] our attention turns to restoration.”

As the women explain their history with the effort to defeat the MVP, the camaraderie among the three is apparent: They finish each other’s sentences, laugh at shared experiences, and collectively recall memories from nearly a decade of organizing around this issue.

And their stories also gesture to a robust network of others — friends, neighbors, leaders, family, landowners, and diverse networks of people who might otherwise have remained strangers.

“There are so many people who have been and are involved in this effort,” Bouldin says. “It seems somehow not quite right to be one of only three interviewed for this piece.”

Majors adds, “I am so grateful for whatever involvement people have — every single one of them is important. It takes a coalition.”

Pitt agrees, “This experience brought the community together, neighbors who didn’t know each other now do.”

Bouldin, Majors and Pitt may not see themselves as exceptional in the MVP fight, but each is extraordinary in her persistence, contributions and commitment to this resistance movement.

As we discuss the origins of their activism against the MVP, each woman pinpoints the moment she became engaged.

“It was the fall of 2014,” Bouldin says, and they all agree. “It’s really depressing to do the math on that,” she adds. “It’s been an all-consuming piece of our lives for all that time.”

“It was the shock of a lifetime,” Pitt says. “When we looked at where the pipeline was going — it was right through the middle of our farm, which we had spent the last 40 years building, preserving, stewarding. Coming within 50 feet of the house. And when we talked to neighbors to the right and the left of us who are on the same route, it was like, ‘We’ve got to get together and fight this!’”

Beginning in the fall of 2014, Majors, Pitt and Bouldin began working in their respective communities to build awareness among landowners and concerned residents about the proposed MVP. But soon, they recognized the power-building potential in forming broader coalitions.

“We first met as the POWHR coalition was forming,” Pitt says. Today the Protect Our Water, Heritage, Rights coalition describes itself as “an interstate coalition representing individuals and groups from Virginia and West Virginia dedicated to protecting water, land, and communities from harms caused by the expansion of fossil fuel infrastructure, including the Mountain Valley Pipeline (MVP).”

“The group that would become POWHR started coming together when Mountain Valley Pipeline and [the Federal Energy Regulatory Commission] held some open house hearings along the pipeline route in 2015,” says Bouldin. “There were people from our county [Monroe County, West Virginia] who traveled down to Virginia because they wanted to hear what was going on in these open houses and in so doing, they started meeting people from Virginia and there was a core group who were saying, ‘We need to be connecting!’”

“There were birth pains with what eventually became POWHR as there are birth pains in many organizations,” Bouldin adds. “Within every county there were organizing challenges — but over time, these connections made a difference.”

“POWHR brought the big picture to everybody,” Majors says.

Part of Your Heart

When considering the paths that brought each of them to anti-pipeline activism, Pitt, Majors and Bouldin all articulated a deeply rooted connection to environmental stewardship.

“I grew up on a farm in northern Virginia with a mother who was a New Englander and an activist. My dad was an engineer and believed strongly in stewardship of the land,” Pitt says. “We farmed and I grew up with livestock. That’s where I got my relationship with the land.”

Pitt lived in North Carolina and Canada before moving to the Blacksburg, Virginia, area when her husband, Joe, began teaching at Virginia Tech.

“We thought we’d move on, as academics often do,” says Pitt, “but when we got here, well, my husband had an officemate with experience building houses.” Pitt laughs. “So we built this house with our own hands.”

Virginia was not an academic pitstop. Donna Pitt made a career at Virginia Tech where she was a galvanizing force in the creation of the school’s Virginia-Maryland Regional College of Veterinary Medicine. She retired after three decades working as an executive assistant for four different deans of the veterinary school. The house that she and her husband built is her home. “We’re still here and we’re not going anywhere,” she says.

“I grew up in southern New York near the Pennsylvania border where I ran free with the dogs and a gun,” Lynda Majors says, laughing. “Dogs and being outside have always been important to me and still are!”

“I always knew I wanted an outside job,” she says. “I went to Cornell University and had various jobs over the years. I met my husband in Arkansas, then we went to the University of Wisconsin where he did a veterinary ophthalmology residency and then we moved to Virginia where we’ve been for 34 years.”

“I feel very centered here in my community,” Majors says. “I want to stay because this is my fight. This is my land.”

Nancy Bouldin agrees. “People will fight for what they love deeply. For most people around here, their land is not a real estate investment. It’s their home, their history, their heritage. To watch that land taken by eminent domain and turned over for someone else’s permanent use and control — that’s a wound that can’t be healed by any amount of money.”

“I grew up in New Jersey, but my husband, Wood, was born and raised in West Virginia,” Bouldin says. “We both did graduate degrees at WVU. But then we moved up near Philadelphia in the late 1970s and didn’t move back to West Virginia until ‘retiring’ here in 2008.”

“I really don’t think I would have become as committed to the pipeline fight if it hadn’t been so clear how deeply attached people here are to their homes and farms and to special landmarks like Peters Mountain — and to a way of life not dominated by industrial development,” says Bouldin. “There’s a strong sense of stewardship, of taking care of the land and passing it on to future generations. You can’t put a cash value on that attachment. It’s like telling someone ‘I’ll pay you $20,000 to take away part of your heart.’”

Despite the significant obstacles facing the MVP at the time of our conversation, Pitt, Majors and Bouldin were concerned about statements from West Virginia Sen. Joe Manchin championing the pipeline as a domestic energy resource in light of Russia’s invasion of Ukraine.

“I think we are at a very critical point right now with the Ukraine situation because we have people like Sen. Manchin saying that the Mountain Valley Pipeline must be completed,” says Bouldin.

Majors interjects: “It’s so ubiquitous in the press — ‘the MVP is 95% complete, let’s just finish this one last little bit up.’ And that’s just not true. It’s nowhere near complete.”

All three women are concerned that legislators who favor expanding natural gas will use the geopolitical crisis in Ukraine to advance MVP construction, even though analyses have found that the natural gas industry can boost natural gas exports this year and beyond without any new infrastructure and accelerated European investment in energy efficiency and renewables may mean increased gas exports are unnecessary.

“Our elected representatives have presented us as ‘they’re just cranks,’” says Pitt. “So we have been betrayed by those who are supposed to represent us all the way along the line from county, state to federal. But that’s why we keep at this: because it’s wrong.”

When asked how they have sustained themselves and their advocacy without getting discouraged, Majors gets fired up, “Discouraged? No! Don’t say that word! I don’t get discouraged. I get angry and motivated!”

Pitt acknowledges that it can feel grinding at times. “People burn out doing this work for their communities — some people for health reasons, depression — it does have a dragging effect,” she says. “You have to have something to keep you going: It’s either fury or eternal optimism. I personally feel that if I don’t keep going, how do I expect that anybody else will?”

Bouldin agrees. “It may sound trite, but I have grandchildren — I feel we don’t have a lot of time left to make changes and there’s something that needs to be done. I get tired, but it’s the coalition: it provides enormous energy. The coalition has kept everyone going.”

The women acknowledge that bringing more young people into the coalition is both challenging and necessary for the future of the fight.

“I understand that younger generations feel like they don’t have political power — that sense of a lack of security and disenfranchisement not felt by older generations,” Majors says. “But this is important. You have a responsibility to something bigger!”

Bouldin describes the importance accountability among fellow activists has played in her work. “All of my work has been done in super close collaboration with Judy Azulay, a founding member of the Indian Creek Watershed Association,” she says. Just like our coalition of groups across West Virginia and Virginia has helped build and sustain each other over time, I would never have stayed in the fight or tried to do as much without Judy. I don’t know how many times we stuck it out for ‘one more thing’ just because we don’t want to let down each other.”

For Pitt, motivation is in plain sight. “What motivates me is that I look out my window and I can see the damn thing,” she says. “If you can’t fight for your property and your water, then you don’t deserve it. At some point, you just have to take action.”