Above Photo: A person hoists a poster in front of the U.S. Capitol during climate protest in Washington, D.C., on December 27, 2019. EVA HAMBACH / AFP VIA GETTY IMAGES

Climate scientists predict climate change will have catastrophic effects in the coming decades if drastic action to reverse it is not taken immediately. Some members of Congress, including Green New Deal resolution sponsors Rep. Alexandria Ocasio-Cortez (D-N.Y.) and Sen. Ed Markey (D-Mass.), are gravely concerned about the mounting threat, but overall, Congress has not met the crisis with the urgency that scientists say is necessary to avoid global tragedy.

Emblematic of federal lawmakers’ lack of urgency are their substantial financial investments in the biggest drivers of climate change: fossil fuel companies.

As of Dec. 13, 2019, 134 members of Congress and their spouses own as much as $92.7 million worth of stock in fossil fuel companies and mutual funds, according to an analysis of financial disclosures by Sludge. House members own between roughly $29.5 million and $78.2 million in fossil fuel stocks, while senators have between $3.8 million and $14.5 million invested in oil, gas, and coal interests. Members of Congress generally report the value of their investments in broad ranges, so it’s not possible to know exactly how much their stocks are worth.

“I think we’re at the point in the global warming story where anyone with an eye to history might want to ask, ‘Do I really want to be trying to profit off the wreckage of the planet?’” said environmentalist and 350.org co-founder Bill McKibben in an email to Sludge. “Also, considering how badly the fossil fuel sector is underperforming the economy, politicians might want to ask themselves, ‘Do I really want my constituents to think I’m this bad at managing my money?’”

Republicans, who generally oppose legislation to cut down on fossil fuel-driven pollution, have roughly twice as much money invested in fossil fuel interests as Democrats. GOP members of Congress own as much as $60.4 million in fossil fuel stocks, while Democrats and an independent who caucuses with the Democrats own up to $32.3 million.

Republican Rep. Michael McCaul of oil-rich Texas is Congress’ biggest fossil fuel investor, owning between $8.2 million and $19.1 million worth of stock in oil, gas, and coal interests. His stock holdings include Berkshire Hathaway (over $2 million), which owns natural gas and coal businesses, Anadarko Petroleum (as much as $500,000), oilfield services company Schlumberger (up to $395,000), and Vanguard Energy ETF (between $3 million and $11 million), a mutual fund that is invested in oil companies such as ExxonMobil, Chevon, and ConocoPhillips.

McCaul is the second-richest member of Congress, worth an estimated $113 million, according to CQ Roll Call. His wife, Linda McCaul, is the daughter of the founder of Clear Channel Communications, which is now called iHeartMedia.

Fellow Texas Republican Rep. John Carter owns between $1.1 million and $5.3 million worth of stock in ExxonMobil, which is headquartered a few hours north of Carter’s 31st Congressional District. Carter is by far the biggest congressional investor in ExxonMobil.

Overall, members of Congress from Texas have the most fossil fuel stock. Twelve Texas representatives (10 Republicans and four Democrats) and one senator, Republican Ted Cruz, have between $14.5 million and $35 million invested in the oil, gas, and coal industries.
Rep. Greg Gianforte (R-Mont.), a former tech executive, has over $4.8 million in fossil fuel stocks. With an estimated net worth of $136 million, he is the richest member of Congress. Gianforte filed scans of his investment account statements with the House Clerk’s office, so his investment totals are exact amounts, not ranges. His biggest fossil fuel investment, nearly $675,000, lies with Chevron. 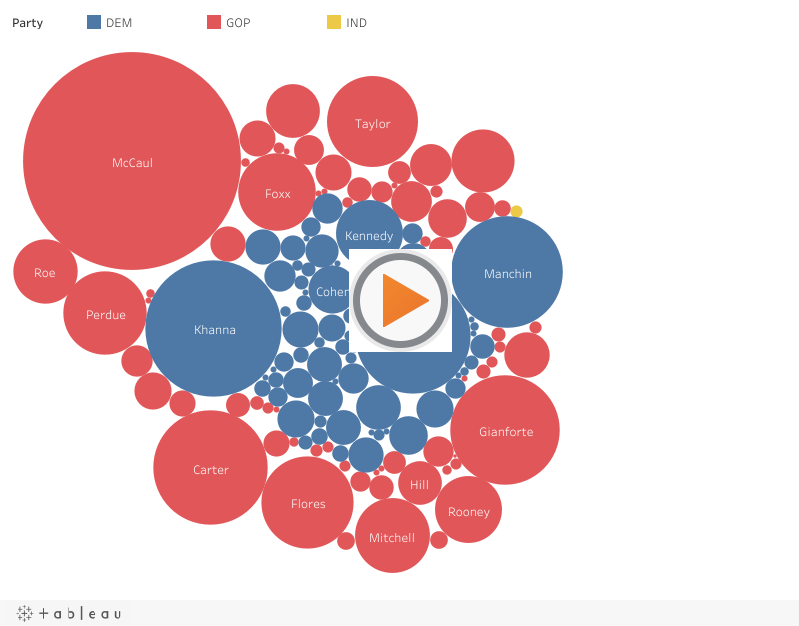 Despite Republicans’ larger fossil fuel investments, some Democrats are among the members who own the most total fossil fuel stock.

Sen. Joe Manchin (D-W.Va.), whom Senate Minority Leader Chuck Schumer (D-N.Y.) made ranking member of the Energy and Natural Resources Committee, has between $1 million and $5 million invested in his family coal business, Enersystems.

Manchin is no friend to the environment, but in some other cases, a member’s policy record does not align with their financial interests.

Ritu Khanna, the wife of Rep. Ro Khanna (D-Calif.), one of the original co-sponsors of the Green New Deal resolution, owns between $752,000 and $7.5 million worth of fossil fuel stocks, making Khanna, by proxy, the second-biggest fossil fuel investor in Congress. The wealth of Ritu Khanna, whose father is chairman of investment firm Mura Holdings and founder and executive chairman of auto parts manufacturer Transtar Industries, is spread over multiple trusts. In most months of 2018, her investment accounts made hundreds of stock trades. The couple’s net worth is an estimated $27 million.

“Ninety-nine percent of the wealth disclosed is my wife’s,” Rep. Khanna told Sludge. “We file separate taxes, and that is her money. I have no control over it.

“I personally am not invested in fossil fuel stocks. Her investments are across many sectors and she lets her investment advisors make those decisions. I have never had any input in her financial planning since our marriage, both prior to being elected and afterwards. I respect that is her wealth.”

Khanna is vice chair of the House Progressive Caucus and was an early endorser of Sen. Bernie Sanders (D-Vt.) for president. In a recent New York Times op-ed with John Kerry, Khanna argued that the U.S. should be leading the world in clean energy development.

“I believe we need to get to a zero-emission future and 100 percent renewable energy as soon as possible,” Khanna told Sludge. “The way to do that is by massive investments in solar, wind, electric vehicles, high speed rail, and cutting edge research and development…I also believe we need a price on carbon and requirements for SEC disclosure of the carbon footprints that companies have so investors can assess the risk.”

Another original co-sponsor of the Green New Deal resolution, Rep. Earl Blumenauer (D-Ore.), owns between $1.1 million and $5.3 million in NW Natural, a natural gas utility based in Portland.

Through family trusts, Green New Deal resolution original co-sponsor Rep. Joe Kennedy (D-Mass.), who is mounting a primary challenge against Markey for a Senate seat, owns a total of between $795,000 and $1,750,000 worth of stock in Chevron, ExxonMobil, NextEra Energy, and Schlumberger. Kennedy sits on the House Energy and Commerce Committee.

ExxonMobil’s former CEO may no longer be the secretary of state, but the company still has a lot of support from Congress, at least when it comes to their investment portfolios. Thirty-six members of Congress collectively own between $3.5 and $11.5 million worth of stock in the company, making it most likely the fossil fuel stock in which Congress is most heavily invested. Four members—Reps. John Carter (R-Texas), Van Taylor (R-Texas), Jim Sensenbrenner (R-Wisc.), and Joe Kennedy (D-Mass.)—have maximum investment amounts of $1 million or more in the Irving, Texas-based oil giant.

Thirty-eight members potentially own up to $8.7 million worth of stock in Berkshire Hathaway, Warren’s Buffet’s corporate conglomerate that operates subsidiaries in the natural gas and coal industries.

Another popular investment is Chevron; 28 representatives and senators own between $1.8 million and $3.4 million in the company’s stock. 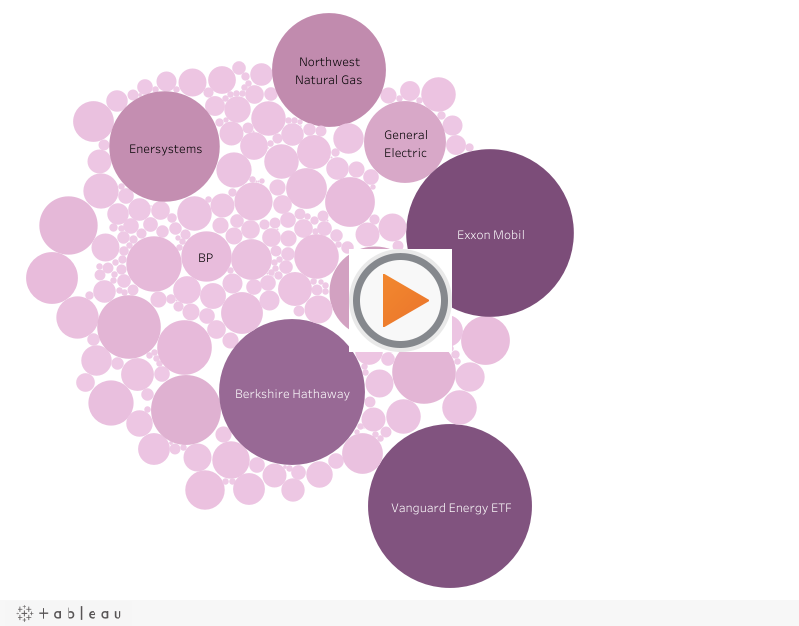 Some ethics experts and members of Congress are concerned about the potential for conflicts of interest and insider trading that these investments pose.

“These instances and others unearthed in the past are part of a systemic problem of members in both chambers trading stocks that pose an apparent conflict of interest,” Scott Amey, general counsel and editor-in-chief of the nonpartisan Project on Government Oversight, told Sludge. “House and Senate rules generally ban knowingly using one’s official position to introduce or aid the passage of legislation if the member has a purpose to further their pecuniary interest. Members of Congress should always behave in a manner that reflects creditably on the institution, and avoiding actual and apparent conflicts is a good way to do so.”

Senators Sherrod Brown (D-Ohio) and Jeff Merkley (D-Ore.) have introduced the Ban Conflicted Trading Act, which would prohibit members from buying and selling individual stocks and from serving on corporate boards, something that’s already banned in the Senate but not in the House.

“Members of Congress serve the American people, not their stock portfolios,” Sen. Brown told Sludge. “Elected officials have access to nonpublic information that can affect individual companies and entire industries. There must be more accountability and transparency to prevent members from using this information and abusing their positions for personal gain.”

In 2018, Sludge built a tool that scrapes the House and Senate financial disclosure portals. On Sept. 20 we ran the scrape, after which we manually entered data from a number of handwritten reports.

Within the energy and natural resources sector, we classified the stock investments by industry, basing these assignments on those used by the Center for Responsive Politics’ Open Secrets website. However, in some cases, we altered an industry or created assignments for companies not in CRP’s database.