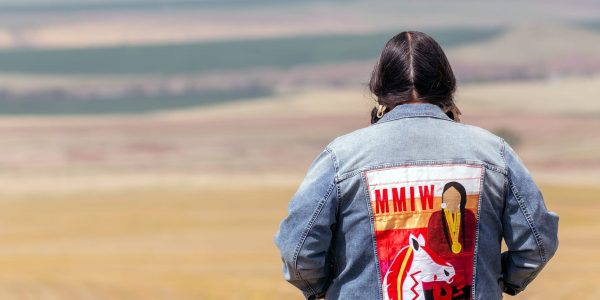 Above Photo: Mildred Quaempts, who lost three female members of her family to unsolved murders or disappearances, stands on a hill near her home on the Umatilla Indian Reservation. Kathy Aney, Underscore.

NDN Collective’s memo shows correlation between MMIW and climate change, and solutions to address both.

The climate change crisis and missing and murdered Indigenous epidemic are inextricably linked, with added negative impact from extractive industries. On top of that, the federal government has much work to do to uphold its trust and treaty obligations to tribal nations to help bring an end to these crises, according to a memo from NDN Collective.

The memo, shared with key members of the Biden administration on Wednesday, outlines how these issues are intertwined, as well as offering solutions that would help address them.

Citing a report from the Minnesota Department of Public Safety, the memo states between 2010-2019, 8 percent of all murdered girls and women in Minnesota were American Indian despite making up only 1 percent of the state’s population.

Additionally, pipelines like Keystone XL and Enbridge Line 3 increase the likelihood that sex trafficking and abuse occur due to the addition of temporary, cash-rich workforces. In fact, the Line 3 environmental impact survey states Native and minority populations are often at higher risk “if they are low-income, homeless, have a lack of resources, addiction, and other factors often found in tribal communities.”

The memo also states that the United States government has long supported policies and industry that “compromises the land, bodies, communities, resources, and very existence of Indigenous people.”

“As a result, tribal communities continue to lack access to clean water, food, and the safety of their women and children,” the memo reads. “Indigenous communities across the globe will no longer sacrifice our most basic human rights alongside the most revered components of our communities and our identities – our women and land.”

Sunny Red Bear, Cheyenne River Sioux, is the director of racial equity at NDN Collective, said the memo is two arms of the organization, climate justice and racial equity, coming together to help move beyond awareness of MMIW to concrete actions that will help address the inequities stemming from the crises.

Like any movement, MMIW has evolved over the years and the organization now uses the acronym, MMIWR+ or missing and murdered Indigenous women and relatives + (Two-Spirit and all other pronouns).

“It’s not just our women and our girls that are going missing, it’s all relatives that we have that are facing inadequacies and so we’re just making that very clear that we have everybody in mind,” Red Bear said of the movement’s evolution.

Red Bear noted the complicated nature of these issues but stressed the correlation between extractive industries that not only harm the environment but also harm Native communities. She hopes memos, like the one today, along with past and future reports put pressure on the current administration to stop pipelines like Line 3.

“So within these reports we also identify root causes and the risk factors, and really describe how extractive industries created demand for our women and our girls that is essentially fueling MMIWR+,” she said.

Tribal leaders have long advocated for true free, prior and informed consent and Judith Le Blanc, Caddo, said it is long past time for tribal nations to be at the decision making table for all projects and initiatives the federal government undertakes.

“Being in good relationship with the federal government is to ensure that tribal nations are at all decision making tables, that we are a part of the discussion of any kind of project that affects our, our land, our water, the air, and our health and well being and any kind of government projects,” said Le Blanc, director of the Native Organizers Alliance. “In many ways, prior, informed consent is restoring consensual relationships, the relationships that we had in the beginning; nation to nation.”

When asked what she thought the federal government and federal agencies have done well to address these issues, Red Bear joked that they have been really good at making promises but added that Indian Country is done with lip service.

She added Native communities are looking for follow through and the proposed solutions in the memo are a step toward making that happen.

“We are going to create this memo to really help you with immediate steps towards ending this. So I think that what we did was made very clear steps towards doing that, that is very easy to understand for every person within our communities, but also our federal government,” Red Bear said. “I hope this opens doors and creates conversations to have our voices heard and to have a seat at the table.”

As someone who has worked in the MMIWR+ movement for a little under 10 years, releasing this memo was something Red Bear was excited about.

“I’m just really excited for people to be able to read this memo and look through it and really start creating their own ideas of how they can not only just back the solutions but also create their own.”