Memorials, Protests On The 6th Anniversary Of Michael Brown’s Death

Above photo: Memorial service for Michael Brown on Canfield Drive in Ferguson on Sunday, Aug. 9, 2020. Sunday was the sixth anniversary of the day Michael Brown was shot and killed by Ferguson police officer Darren Wilson in 2014. About 100 people including Michael Brown Sr. and family members showed up for ceremony. David Carson, dcarson@post-dispatch.com.

About 100 people gathered in a Ferguson street Sunday to mark the sixth anniversary of the shooting death of local teenager Michael Brown by a police officer — an event that not only resonated throughout the community but came to ignite a national movement and conversation around racial inequalities and injustice.

Sunday’s memorial service — held in front of an apartment complex on a painted and flower-strewn patch of pavement on Canfield Drive, where the 18-year-old died — featured speeches from local leaders, as well as Brown’s friends and family members.

It was made clear that, even as the years pass, plenty of heartache remains.

“Today, it’s just still hard,” said Michael Brown Sr., reflecting on his son’s death and its aftermath. “Over the years, going through and coming to this site, I was very angry.” 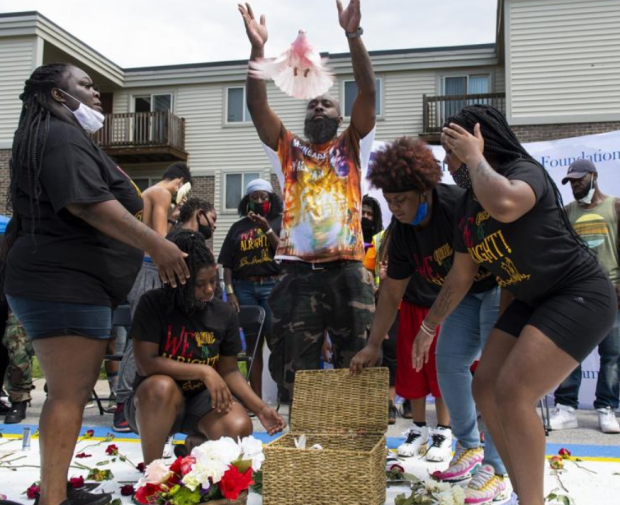 Michael Brown Sr. releases a dove into the air during the 6th Annual Michael Brown Memorial on Canfield Drive in Ferguson on Sunday, August 9, 2020. Michael Brown was killed by a police officer at the location in 2014. Photo by Chris Kohley, ckohley@post-dispatch.com

“This is the fate of so many across our country,” she said. “He didn’t have to die.”

The event included four and a half minutes of silence in Brown’s honor — one moment for every hour that his body remained in the roadway.

This year’s anniversary falls just more than a week after St. Louis County Prosecutor Wesley Bell announced that, after reopening an investigation into Brown’s death, his office would not issue charges against Darren Wilson, the white officer who shot him. Bell said that, while Wilson was not exonerated, he concluded there was not sufficient evidence to pursue murder or manslaughter charges or disprove self-defense.

Cheyenne Green places a rose on a memorial set up to Michael Brown on Canfield Drive in Ferguson on Sunday, Aug. 9, 2020. Sunday marked the sixth anniversary of the day Brown was shot and killed by Ferguson police officer Darren Wilson in 2014. About 100 people showed up for ceremony. Green has been involved with the Michael Brown protests since the beginning. Photo by David Carson, dcarson@post-dispatch.com

Multiple speakers on Sunday — including members of Brown’s family — expressed anguish and frustration with the decision.

Sunday’s memorial also comes as the nation is embroiled in conversations about racial inequality that are as loud and widespread as any since Brown’s death helped catalyze the Black Lives Matter movement amid 2014’s high-profile protests in Ferguson. 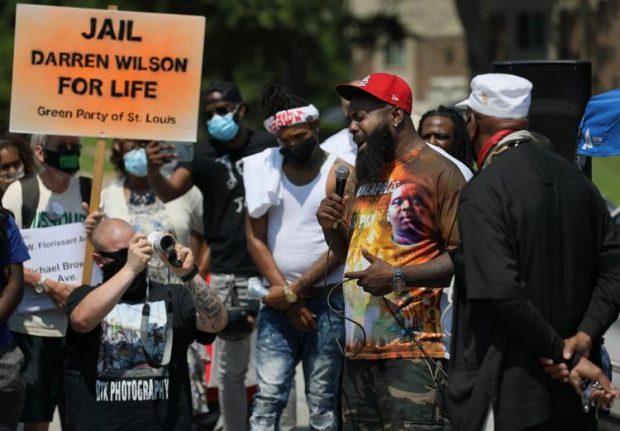 Micahel Brown, Sr. speaks at the memorial for his son on the sixth anniversary of his death. Photo by David Carson.

“Six years later, the fight continues, and we’re still fighting for justice for everybody and equality for everybody,” said Jason Armstrong, Ferguson’s new police chief appointed in 2019, who also spoke at the event.

He said that recent deaths of Black people at the hands of police around the country may make it seem like there has not been progress since Brown died. But he said the ensuing groundswell of activism sparked in Ferguson added crucial momentum to the broader conversation on race that is still playing out today. 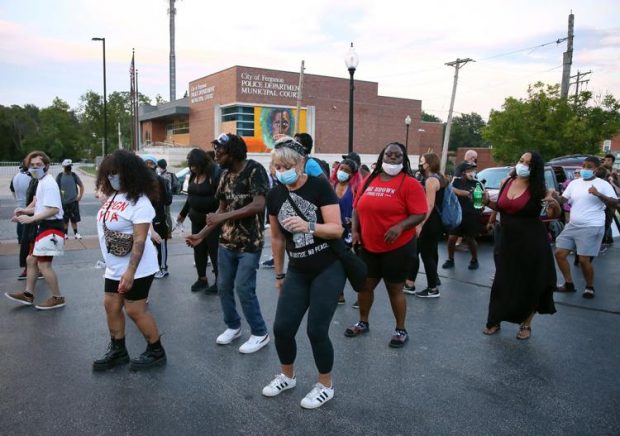 Protesters dance the “Cupid Shuffle” across the street from the Ferguson Police Department in Ferguson on Sunday, Aug. 9, 2020. Sunday was the sixth anniversary of the day Michael Brown was shot and killed by Ferguson police officer Darren Wilson in 2014. Photo by David Carson, dcarson@post-dispatch.com

Dancing in the street

On Sunday night, activists blocked traffic and danced in the street outside Ferguson Police Department. At least one protester was arrested around 10:30 p.m. after police told the crowd to move back and released pepper spray.

“This represents a painful day for us … we took to the streets, and for the most part we ain’t been home since. We are waiting until we get the justice we deserve,” Cathy “Mama Cat” Daniels said to the crowd.

Dasha Jones said she lived in the Canfield Green apartments when Brown was killed. She heard the shots, and then saw his body in the street. It’s what moved her to be an activist. 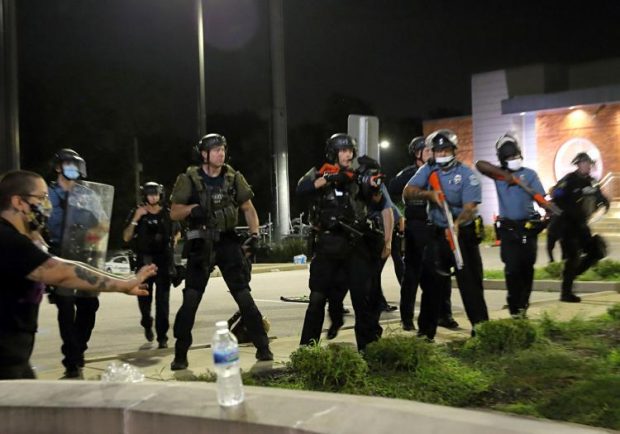 Police officers with “less than lethal” weapons move forward towards a line protesters and threaten to shoot during a demonstration at the Ferguson Police Department in Ferguson on Sunday, Aug. 9, 2020. Sunday was the sixth anniversary of the day Brown’s son Michael Brown was shot and killed by Ferguson police officer Darren Wilson in 2014. Photo by David Carson, dcarson@post-dispatch.com

“Even though it’s a newer year, some people are still racist. There are still people that feel offended by my skin color. … I feel they feel they’re able to get away with it,” Jones said. “I don’t hope — I know things are gonna change.”

Bishop Derrick Robinson also joined the crowd of about 100 on Sunday night.

“Six years later, we still outside,” Robinson said. “This is why we protest. Mike Brown is the epitome of why we do what we do … we want to let people know we still stand in solidarity and unity and fight as one family … we still outside. We’re not going home.” 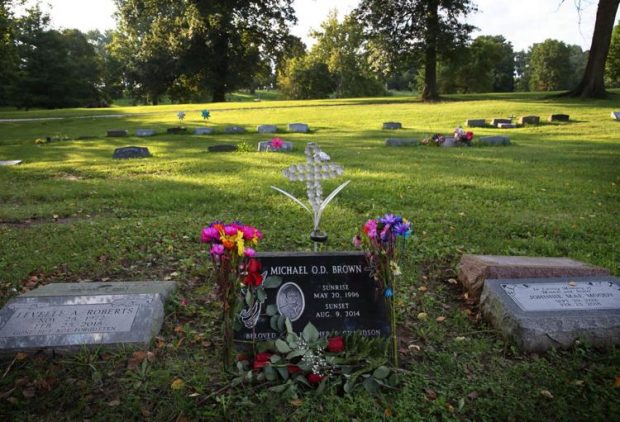 Flowers decorate the grave on Michael Brown in St. Peters Cemetery in Normandy on Sunday, Aug. 9, 2020. Sunday was the sixth anniversary of the day Michael Brown was shot and killed by Ferguson police officer Darren Wilson in 2014. Photo by David Carson, dcarson@post-dispatch.com