Memory Of Egyptian Revolution Is Only Weapon We Have Left

One of the Tahrir Square protesters looks back on how the country has changed, five years after the fall of Mubarak

I didn’t take my camera out with me the night Hosni Mubarak was overthrown. I stood in Tahrir Square among tens of thousands of Egyptians and told myself I would enjoy the moment, I would not divide myself from the night’s magical reality with a lens.

I had filmed up until then because it was my job, because history must be recorded, because an image can change the world, because everyone had to contribute somehow to the revolution.

But that night the camera stayed at home. History had happened, the world was changing before our eyes.

Fireworks filled the sky and a chant rose up: “Raise your head up, you’re Egyptian”. These were the only words I tweeted that night, so enamoured was I with the newness of the idea. We had won the information war and a new future was being born all around us.

For years afterwards we wrote and argued in a battle over the future. We were naive, no doubt, but the whole world was naive with us, willing us forward – the wondrous possibilities of the Arab Spring, the canary going deeper into the mine.

For years, images and words had the power to move the street. The road was revolution and all we knew was that it led somewhere new, that finally an alternative to the status quo could be imagined.

Tahrir Square was a spectacle and for a moment it froze the country, the world even, and history was reborn. The police were vanquished from the streets and the city was ours.

The revolutionists busied themselves with ideas about borderless futures and public ownership and crowd-sourced constitutions. Time Magazine declared theProtestor their Person of the Year.

We were naive, no doubt, but the whole world was naive with us

But the power of the spectacle faded, the urgency of revolution grew weaker, our enemies regrouped and the elites prepared for elections as we clung ever more to the vanishing unknown.

I moved to Egypt looking for my Spanish Revolution, and in the end, I found it. History is cyclical.

At Rabaa Square the police killed up to 1,000 protesters in a day and after that there was no more revolution. The spectacle of Tahrir was buried under their spectacle of death and we are left with one question: how do you take power from those who will kill 1,000 people in a day? By force? And what would that impossible force cost us?

We lost the battle over the future so now we fight to save the past, we obsess over it, each camp laying claim to it.

The army says it is the trusted guardian of Egypt and when the Muslim Brotherhood hijacked the revolution it launched a corrective coup as demanded by the people.

The Brotherhood say it is the only group to ever have won electoral legitimacy and was betrayed by counter-revolutionary collusion between the army and the liberals.

The revolutionists say they sparked it all but refused to play electoral politics and were betrayed by the liberals and squeezed out of the equation by the army and the Brotherhood.

And all the while each side parades its dead in triumphalist insistence of its own revolutionary credentials.

What else do we have left to fight with? That memory of possibility is all we have. Maybe, for now, it is enough. We know that it still scares them: the idea of revolution. January 25th will always carry a symbolic and emotional potency, and the state has shown its nervousness. 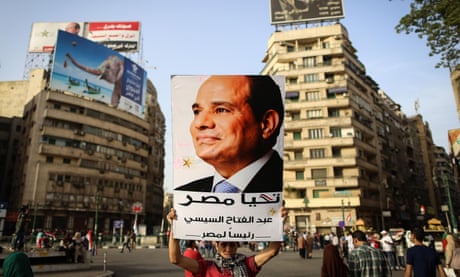 In the days leading up to the anniversary thousands of apartments were raided, art spaces and publishing houses were shut down, activists and Facebook admins were taken from their homes and dozens of people were deported. The state knows that it deserves to be overthrown.

The question is what might come next. The possibilities line up before us: decades of President Abdel Fatah al-Sisi overseeing a country slowly crumbling into the sea. A series of intra-military coups. More uprisings of the hungry and dispossessed. A slow democratisation process played out between competing elites. State collapse and an Islamic State insurgency. An acceleration in climate change, the flooding of the Nile Delta and widespread famine.

Or, something different, something none of us can see yet. I can’t say that I’m optimistic. But I’m not dead and I’m not in prison so I have no right to say it’s all over.

Omar Robert Hamilton is a filmmaker and writer. He co-founded Cairo’s Mosireen Collective, making dozens of short political films on the Egyptian revolution. At the height of global interest Mosireen was the most watched non-profit YouTube channel in the world. It remains the most watched in Egypt