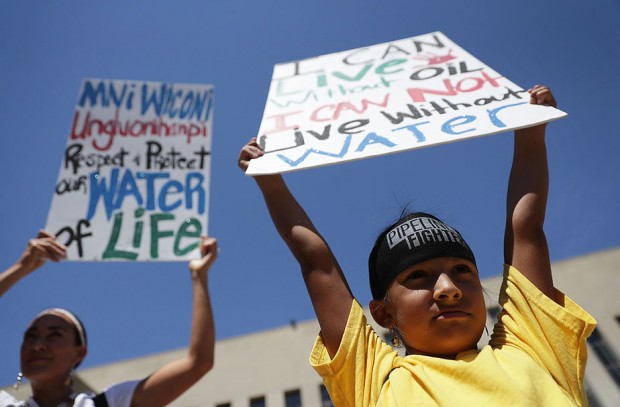 Above Photo: by Alex Wong/Getty Images

On March 3, MinnPost reported that four memos were pulled from the Department of the Interior website on the Army Corps of Engineers after Donald Trump took office, citing their removal signifies, “an attempt to make opaque some serious shortcomings in the Corps’ performance on DAPL that are little known and less understood.”

The Dakota Access Pipeline, enabled by Barack Obama signing a bill in 2015 to lift a ban on U.S. Oil exports creating the demand for domestic pipelines to be built for oil export, emerged as a movement for indigenous rights and environmentalism, as camps close to where the pipeline is being constructed under Lake Oahe in North Dakota swelled with water protectors trying to halt its construction in 2016. Pipeline security and local police forces made controversial headlines throughout late 2016 with their use of militaristic tactics against the water protectors, including the use of overt propaganda, water cannons in sub-freezing temperatures, attack dogs, and inflicting severe injuries against water protectors.

On December 4, 2016, the Army Corps of Engineers announced the pipeline’s construction would be halted pending an environmental impact assessment, hailed as a short-term victory for water protectors. But after Trump assumed office, the pipeline’s construction quickly continued to move forward, leaving the Standing Rock Sioux forced to pursue a legal battle for the Army Corps of Engineers to stand by that initial decision.

The memos recently removed from the Department of Interior website could provide the necessary evidence for a court to rule in favor of the Standing Rock Sioux. One of the memos authored by Hilary Tompkins, Solicitor of the Interior under the Obama Administration, found that the Army Corps of Engineers attempted to avoid the issue of the pipeline’s route under Lake Oahe encroaching on Standing Rock Sioux treaty land, accepted Energy Transfer Partners’ assertion based on unsubstantiated claims that the likelihood of pipeline leaks were low and the company’s review of possible spills has not been released for independent review. Tompkins also noted the Army Corps of Engineers falsely concluded the pipeline posed little risk to Standing Rock Sioux reservation drinking water based on assertions that the reservation’s residents use wells and other surface water, but in fact the majority of the reservation’s residents depend on Lake Oahe as a direct water source.

Despite Tompkins’ assessment, last amended on December 4, that the Army Corps of Engineers did not abide by legal requirements in previous decisions to move the Dakota Access Pipeline ahead, the Assistant Secretary of the Army, Jo-Ellen Darcy, has refused to acknowledge the Corps’ errors. Darcy announced the Army Corps of Engineers’ decision on December 4, 2016 to halt the Dakota Access Pipeline’s construction pending an environmental impact assessment, but that decision has been subsequently rescinded under the Trump Administration, with an article detailing that December 4 announcement removed from the Army’s website.

Tompkins’ memos do however corroborate the criticisms from the Standing Rock Sioux against Dakota Access Pipeline, and could potentially force the Trump Administration to stand by the Army Corps of Engineers’ decision from December 2016.

“The Corps ultimately rejected the Bismarck route due in large part to its proximity to a central municipality and to ‘multiple conservation easements, habitat management areas, National Wildlife Refuges, state trust lands, waterfowl production areas, and private tribal lands.’ The Corps also noted that the Bismarck route crossed or was in close proximity to ‘several wellhead source water protection areas,’ and thus determined that the agency should avoid that route so as ”to protect areas that contribute water to municipal water supply wells,’” Tompkins noted, affirming that the Dakota Access Pipeline’s original route, near the North Dakota capital of Bismarck, was moved further south due to concerns that any spills would adversely impact local water supplies. Sunoco Logistics, the company that will operate the Dakota Access Pipeline, tops charts in the United States for most oil spills, with over 200 leaks since 2010.

The memos also affirmed that the Army Corps of Engineers made no efforts to consult with the Standing Rock Sioux Tribe after the decision to move the original pipeline route. Tompkins added, “The Standing Rock and Cheyenne River Sioux Reservations are the permanent and irreplaceable homelands for the Tribes. Their core identity and livelihood depend upon their relationship to the land and environment – unlike a resident of Bismarck, who could simply relocate if the DAPL pipeline fouled the municipal water supply, Tribal members do not have the luxury of moving away from an environmental disaster without also leaving their ancestral territory. This underscores the far-reaching effects of a DAPL spill’s potential environmental impacts on the Tribes’ historic, cultural, social, and economic interests.”