PHOENIX — The mother who sparked protests outside the ICE building after immigration authorities detained her has been deported to Nogales, Mexico.

Guadalupe Garcia de Rayos,35,had been attending regular meetings to check in with ICE officers in order to stay in the country with her family but on Wednesday when she showed up for an appointment, she was detained and deported.

“This is our country because we have spent most of our lives here,” said Aarón Rayos at a press conference after finding out his wife had been sent to Mexico.

President Trump’s executive order prioritizes removal of unauthorized immigrants who have been convicted or charged of a criminal offense. In 2008 Garcia de Rayos was arrested in a workplace raid at a water park and convicted for criminal impersonation for using a fake social security number. She spent three months in the Maricopa County Jail and three months in the Florence Detention Center. She was issued an Order of Supervision (OSUP) and released.

For eight years she checked in with immigration officers and was allowed to return to her family in Mesa. According to a statement issued by ICE, García De Rayos was detained this time based on a removal order issued by the Department of Justice’s Executive Office for Immigration Review in 2013. “Relevant databases indicates Ms. Garcia De Rayos has a prior felony conviction dating from March 2009 for criminal impersonation,” according to ICE.

Demonstrators joined her family outside the ICE building in a show of solidarity. “You’re not alone Lupita,” they chanted as they walked alongside her as she entered the facility Wednesday. She hugged her husband and two kids before heading inside for a meeting with immigration authorities. As news of her detention spread, dozens of protesters gathered to demand her release. And later protesters tried to stop the van transporting García De Rayos and other immigrants from leaving the parking lot. 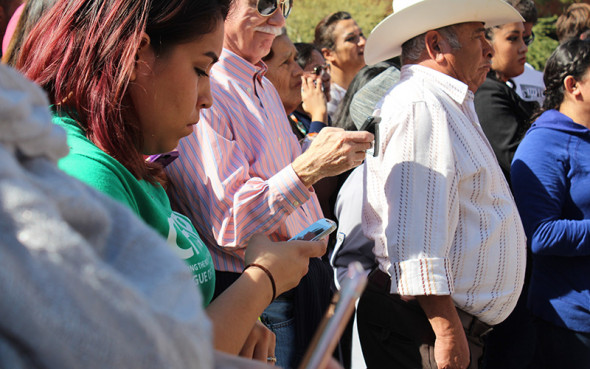 Her husband and two children, a daughter 14, and son 16, caught a glimpse of Rayos de García through the vehicle’s tinted window and tried to talk to her. “It’s going to be okay, have faith,” said Aarón Rayos in attempt to comfort his wife.

“Seeing her in the van made me really sad,” said her daughter Jacqueline Rayos. “Nobody should have to pack their mother’s bag to be deported.” 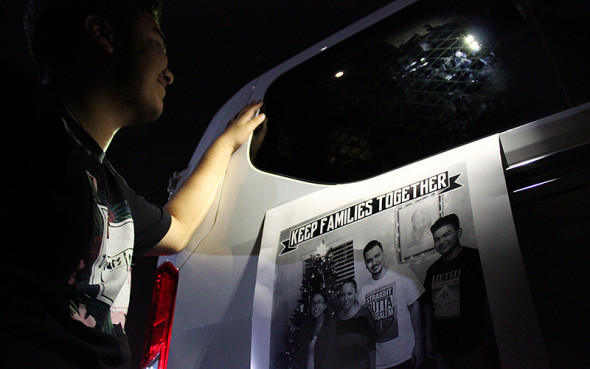 Angel Rayos, 16, tries to talk to his mother Guadalupe Garcia De Rayos who is in a van being taken away by ICE officers. (Photo by Charlene Santiago/Cronkite News)

Manuel Saldaña, a U.S. military veteran, put his arms around one of the vehicle’s front tires, chanting with protesters, “No one is illegal!”

“There are too many people who are at risk right now,” said María Castro, who sat down in the street behind the van. “We need to all come out as a community before they come out after all of us.”

The Phoenix Police Department cleared the road and arrested seven protesters including Saldaña and Castro. 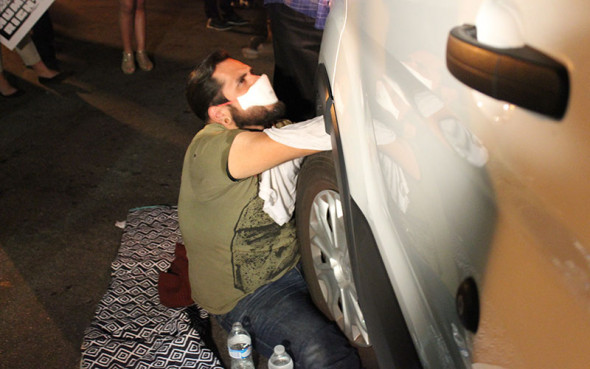 Francisca Porchas, director of Puente Human Rights Movement, urged people to call Phoenix ICE Director Albert Carter and Sen. John McCain to intervene and stop the deportation. “Today is about Guadalupe but it’s also about Arpaio’s racist legacy of terror and persecution of the people of Maricopa County,” she said referring to the former Sheriff’s immigration enforcement actions.

Mesa Mayor John Giles sent a letter to Director Carter requesting she be allowed to stay with her family. “I deeply value the contributions to our community that have been made by Guadalupe and her family,” he said in the letter. “People making our community unsafe should be deported. Mothers should be with their children.” 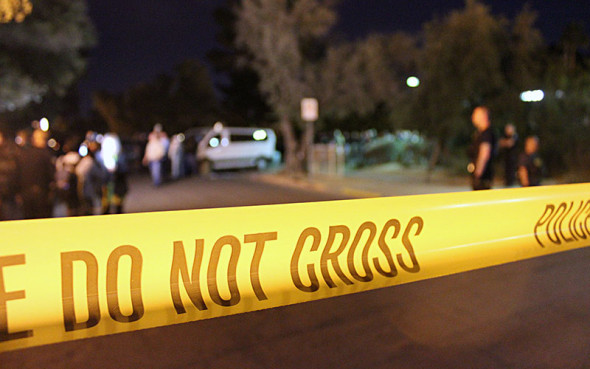 Phoenix Mayor Greg Stanton also issued a statement about the deported Mesa mother. “What happened last night to Guadalupe Garcia de Rayos is a travesty. She has been peacefully living and working in the Valley for more than two decades, and by all accounts was building a life and contributing to our community. She has now been torn apart from her family.”

Garcia De Rayos arrived to the U.S when she was fourteen. She is the mother of two U.S. citizens. “We are a humble family just like everybody else and we are not a threat,” said Aarón Rayos.

“We need to be here for her because as a community we need to support each other,” said Jaime Valdéz, one of the demonstrators outside the ICE building who tried to stop Garcia de Rayos deportation. “Today it’s her but one day it can be me. It can her, him, it can be anybody,” he said.