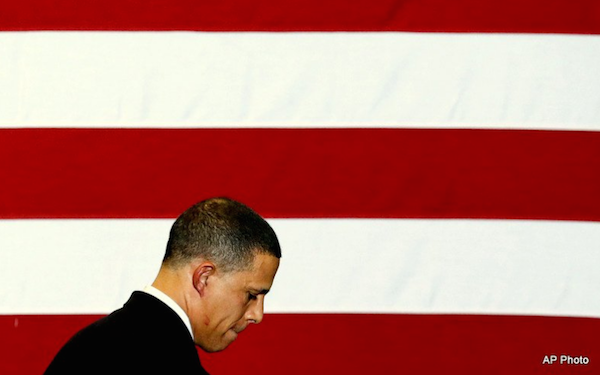 After getting clobbered on Nov. 4, the Democratic Party needs to ask itself some tough questions and come up with honest answers. If it doesn’t, it’s going to continue to lose elections because it lacks credibility with its own voter base.

The 2014 election was a disaster for Democrats. Any Democratic partisan who tries to explain it away is doing a disservice to their party. When the Maryland’s Lt. Gov. Anthony Brown loses to an unknown Republican in a state where the Democrats have a 2-to-1 registration advantage, the Democratic Party better look in the mirror and ask: Why didn’t people vote for us? And why didn’t the base of people who have voted for us come out to vote?

Democratic Party chair Debbie Wasserman Schultz announced that the party will initiate a process to understand why they lost so badly in the recent election. An honest reflection on these questions and an informed shift in strategy would result in a transformation toward a truly populist platform with non-corporatist candidates. That shift would make the Democratic Party the dominant party for decades to come. Failure to face these issues will ensure the Democrats will never play the role of leadership that the country needs at this critical time.

Here are the answers to the questions the Democratic Party needs to be asking itself: People didn’t vote because the Democratic Party has not served the interests of their constituents. The Democrats are trying to serve two masters: big money — primarily from Wall Street and transnational corporations — and the people. The people want policies that big business opposes.

Unfortunately, all that the people are getting is empty rhetoric created through focus groups that sounds progressive, while the Democrats’ actions do the opposite. Wall Street and big business interests get policies that expand their already too extreme wealth which is corrupting the government. Voters are hip to the game that is being played and are choosing to drop out. They are forcing the Democrats to decide which side they are on: big money’s or the people’s.

As long as Democrats represent wealthy interests rather than the voters, they will never be a political party that can govern the country and get things done. The people will withhold their votes and actively oppose their policies.

The Democratic Party needs to know that Hillary Clinton, their front-runner for 2016, is on the wrong side. She is taking money personally and politically from Wall Street, Monsanto, weapons makers and other transnational business interests. She has taken huge speaking fees to enrich herself and the Clinton Foundation. While we would like to see a female president, her gender alone is insufficient to energize voters. Hillary cannot overcome her history and remake herself to win the presidency in 2016. The party would be foolish to coronate her.

The views of Americans were most clearly seen in direct democracy on Election Day where people voted, even in red states, for increases in the minimum wage, to block fracking in their communities and for paid sick leave. Looking at polls of the American people conducted today and over the past decade or more, they are much more progressive than the way either party governs — meaning that, essentially, the people are not represented in U.S. government.

March on the Democrats

The day before Election Day, a large group of climate justice activists marched to the Democratic National Committee headquarters as part of lively, week-long series of Beyond Extreme Energy protests in Washington, D.C. The purpose was to tell the Democrats they cannot count on votes from people who are concerned about the climate crisis.

Democratic political figures including President Obama and Hillary Clinton put out rhetoric expressing concern about the climate crisis as the greatest ecological challenge we face, yet their policies are absolutely counterproductive. Democrats need to know that voters are smart enough to see the discrepancies between their rhetoric and the reality of their policies.

The protesters delivered a letter to the chairperson of the Democratic National Committee which explained this in detail: “all of the above energy” — including exporting coal and gas, exploring offshore oil resources, loosening rules for oil trains, building fossil fuel infrastructure, and participating in extreme extraction for tar sands, fracked gas, coal and uranium for nuclear power — worsen the climate crisis. We need to stop building carbon-nuclear infrastructure and as rapidly as possible move to a carbon-free, nuclear-free energy economy. We can make this transition by 2030. But no Democrat is taking the necessary leadership on climate issues.

Leaders who move the country toward the clean, carbon-free, nuclear-free energy economy will be supported. Leadership that does not make this transition will be blocked by climate activists. We will seek to remove them from office, protest their campaigns and block their policies.

Climate justice activist Tim DeChristopher joined the march and handed the letter to the DNC representative, National Political Director Raul Alvillar. DeChristopher emphasized that voters have tried to work with the Democrats on the climate crisis by speaking out at town meetings and voting for the lesser evil, but it has become obvious that these strategies have failed.

He warned Alvillar, “We will remove Democrats from office if they do not act appropriately on the climate crisis.”

Many activists have come to the conclusion that our power lies in un-electing Democrats who are wrong on this issue, even if it means removing a Democrat who is replaced by a Republican.

In response to the letter, Alvillar said, “Though we disagree . . . get out and vote.” It is evident that the Democrats had not gotten the message before Election Day.

In this video of the protest it is apparent that the policies the Democrats put in place are hurting families and communities across the country. People told their stories in front of the DNC.

Further, when DeChristopher warned that the people will block Democrats who are not good on these policies, the crowd spontaneously started chanting: “Get the message, get the message.”

We cannot think of a policy the Democrats have put forward that puts the people and the planet before the profits of their contributors. Below are just a few of many examples:

Health care: Sixty percent of the public and 80 percent of Democrats wanted a single payer health system, but Obama put the interests of the insurance companies and Wall Street investors first. Now 30 senators, half of whom voted for the Affordable Care Act, have been forced out of office.

The wealth divide: Obama decided to stop discussing extreme inequality rather than embrace the movement for shrinking the wealth divide. Further, his economic policies have dramatically expanded inequality.

The working poor: Rather than advocating for a living wage of $15 an hour, Obama put forward an inadequate $10.10 wage for federal workers that will be phased in when new contracts are negotiated.

Immigration: Obama’s rhetoric is welcoming, but his actions make him the largest deporter of immigrants and divider of families in U.S. history.

Militarism: Obama ran as a peace candidate who wanted to end the rationale for war, but as president he has attacked seven Muslim countries – bombing more countries than Bush, normalized the use of drone killings, and expanded U.S. militarism around the world.

Clues as to whether President Obama and the Democrats got the right message from last week’s election will be where Obama stands on two immediate issues: (1) whether he supports the reclassification of the Internet as a common carrier and puts in place net neutrality rules or he sides with the corporations and allows special deals for wealthy corporations; and (2) whether the Democrats demand that trade agreements be written to put the people and the planet ahead of corporate profits and protect the interests of workers, the environment, the Internet, food and water, among other necessities of the people.

The Democrats need to show voters that their somewhat progressive rhetoric matches policy reality. So far, the Democrats have no credibility with the electorate because of the mismatch between rhetoric and reality.

Message to the movement

We need to embrace our electoral and grassroots people power. The Democratic Party needs us if they want to govern. Big business interests are learning that our protests and blockades undermine extreme extraction infrastructure by making them money losers that investors should ignore. People have the power to transform the nation, and what we do is more important than what elected officials do.

The “Nader Effect” should be understood to be the “Nader-Power Effect.” We still hear Democratic partisans say we can’t support third-party candidates because “look what happened in 2000.” This view fails to understand political power. If we build third parties that are strong enough to impact the outcomes of elections, i.e. what the corporate media and Democrats call “spoiling,” then we have real power.

In 2004, people should have united around Nader to say: “We have the power to deny your election, and candidates need adopt our views or we will ensure they lose the election.” We cannot shy away from this power; we need to embrace it. Some of the most important transformations in history resulted from people who never won office but were big enough to impact the outcome of the election.

Some activists think that it is better to work within the Democratic Party — for example, by running in primaries — to change the party. Yet it is very hard to run as an insurgent in a Democratic primary. Candidates will find themselves excluded from public events and not taken seriously by the media. Unlike in a general election, an insurgent Democrat does not have the power to impact the outcome of the election. (We are not saying that running an insurgent campaign should never be done, but its impact is not as great as a third-party general election campaign.)

Not only do we need to block candidates who put forward counterproductive policies, but the people-powered movement also needs to block infrastructure that is damaging to the people and the planet, strike at businesses that mistreat and underpay workers, move our money from corrupt big banks, and mobilize against injustice wherever we can.

We have seen the power of blockades in energy infrastructure. Just recently one of the biggest projects adding to the climate crisis, the tar sands of Canada, announced a massive 65 percent drop in profits in a single quarter. From Nov. 3-7 there were blockades against extreme energy extraction, which escalated with protests at the Federal Energy Regulatory Commission.

Building on Flood Wall Street and actions over the summer, there was a series of Beyond Extreme Energy (BXE) actions this month in Washington. BXE participants blockaded the FERC every morning and held other actions in the afternoon.

People are also currently doing great work blockading the Seneca Lake fracking storage facility. This is their third week of protests. Election Day saw the second blockade in two days at a Cove Point liquefied fracked gas terminal construction site. Another action was held on Tuesday and future actions are also being planned.

It is time to shed our fears and embrace our power: If we link arms in a movement of movements that recognizes our issues as connected, then we are unstoppable; another world is possible.

Margaret Flowers and Kevin Zeese are organizers with Popular Resistance, which provides daily movement news and resources. Sign up for their daily newsletter and follow them on Twitter: @PopResistance.