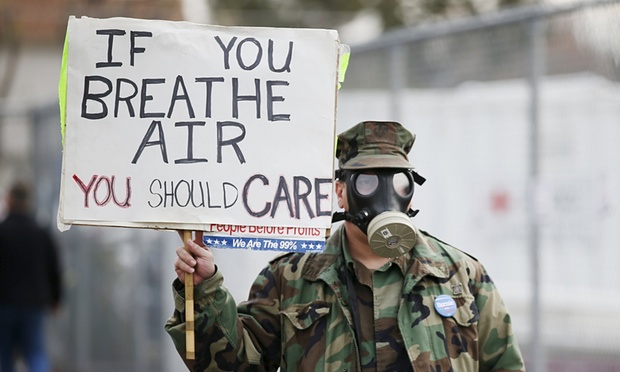 Photo above: Brian Seligman holds a sign to protest a gas leak in the Porter Ranch area of Los Angeles before a meeting of the California air quality management district in Granada Hills on Saturday. Photograph: Danny Moloshok/Reuters

Oakland, California (January 27, 2016) – New analysis from PSE Healthy Energy and University of California at Berkeley finds that increased deployment of renewable energy is the best way to meet or even surpass Clean Power Plan targets, as recent scientific measurements of methane leaks from natural gas systems have found higher rates of leakage than those recorded in official inventories. States that plan to depend on switching their electricity generation from coal to natural gas under the Clean Power Plan risk failure to achieve meaningful greenhouse gas reductions.

As the Obama Administration develops new rules for methane, such as last week’s Bureau of Land Management regulations applied to the release of methane from new and existing oil and gas production sources on federally-managed lands, the study – using updated assumptions of methane leakage – underscores the need to further address methane leakage in order to meet climate targets.

Dr. Elena Krieger, director of the Renewable Energy Program at PSE Healthy Energy and co-author of the report, said, “Our research shows that the nation can easily meet its carbon pollution reduction goals by deploying clean, renewable energy and energy efficiency projects across the country at rates that we are already seeing on the ground in many places. This is an easy way for states to ensure that America will truly achieve the emissions reductions that will help our country meet the climate targets agreed to in Paris last December, and decrease the risk that methane leakage will undermine emission reduction efforts in the power sector.”

The Clean Power Plan calls for 32% emissions reductions below 2005 levels by 2030. The plan allows each state to determine how best to reduce their power sector emissions in that timeframe, and suggests three pathways: switching electric generation from coal to natural gas, improving the efficiency of coal power plants, and replacing fossil fuels (coal and natural gas) with renewable energy sources like wind and solar generation.

U.S. EPA calculations state that nearly half of those reductions have already occurred due to historic coal-to-gas switching between 2005-2013. But recent science has found that this calculation does not reflect the full climate impact of methane leakage across the natural gas system, which erodes the climate benefits of switching to gas.This new study released today updates these historic emissions reductions to reflect lifecycle emissions of methane.

The study co-author, Zeke Hausfather of University of California, Berkeley, said “Methane is a very potent greenhouse gas, and a strong contributor to climate change. The most recent scientific studies show that methane leakage is variable, but can be quite high in some areas of natural gas production.Without taking into account the full lifecycle of natural gas, it is impossible to know the true climate impact of our energy decisions.”

However, the study also analyzed two energy mixes that include future growth in the deployment of renewable energy and efficiency at levels on par with current and historic annual renewable energy growth in the US.  The study finds that even if methane leakage rates are at the higher end of the analyzed range, the Clean Power Plan targets can not only be achieved but even surpassed by adopting such high-renewables energy mixes.

This finding suggests that to reduce the climate impact of electricity generation in the U.S., there must be a greater focus on curbing upstream methane leakage rates from across the entire natural gas production, transmission and distribution chain, and, even more reliably, states should develop Clean Power Plan implementation plans that continue to support the rapid growth of renewable energy and energy efficiency rather than promoting the increased use of natural gas. [Emphasis added]