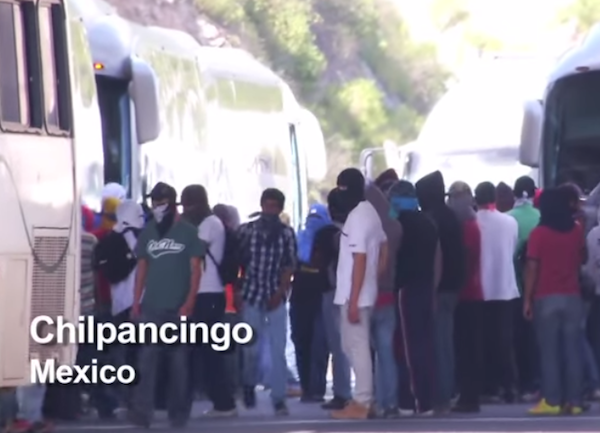 CHILPANCINGO, Mexico —Protests against the disappearance of 43 students in southern Mexico intensified on Saturday when a group of masked youths blocked a main highway and hijacked four trucks and four buses.

The group, students from the Ayotzinapa rural teacher’s college, blocked the highway connecting the state capital to Mexico City at around 4 p.m. With rocks in hand and faces covered with t-shirts and bandanas, the students forced the trucks and buses to pull over and commandeered the vehicles.

The students have been protesting the disappearance of 43 students who vanished on Sept. 26, after they were attacked by police in the city of Iguala.

Prosecutors in the state of Guerrero believe municipal police detained the students and handed them over to members of a drug gang, which executed them and buried their bodies in clandestine graves. Jailhouse confessions have already led investigators to a mass grave near the city of Iguala with 27 bodies. On Thursday, a second grave site was found, though authorities have yet to say how many bodies it contained.

Ayotzinapa students have said that they are skeptical of the government’s investigation and vowed to continue the search for their classmates until independent experts confirm the identity of the bodies.

Saturday’s protest began when more than 100 students left the Ayotzinapa college in five buses that they had jacked during previous protests.

The students drove the buses 12 miles to the highway junction and partially blocked the road. Soon after, two trucks belonging to Mexican bread company Bimbo passed by and the students, armed with rocks, forced the drivers to pull over and took their trucks, which were loaded with doughnuts and pastries.

“They took me by surprise,” said one of the truck drivers, who asked to be identified only as Onassis. “I tried to make a U-turn, but it was too late to turn back.”

Onassis surrendered the truck, which doesn’t belong to him, without resistance.

“It’s the second time they do this to me,” said Onassis, who distributes Bimbo products in Chilpancingo.

The students refused to grant Fusion interviews during the incident. As they staged the roadblock and hijacked two more delivery trucks, they repeatedly asked our cameraman to stop filming them and to stay clear of the scene.

“We can’t speak about these events while they are happening,” said one student, wearing a blue t-shirt wrapped around his face.

“You already have your story, stop taking images of us now!” shouted another.

Police did not show up at the roadblock, which lasted about an hour. After the students commandeered the eight vehicles, they drove them back to their campus in Ayotzinapa.

Their motive for stealing the trucks is unclear. But members of the Ayotzinapa teacher’s college, known here as “normalistas,” regularly stage this sort of protest, which they refer to as an actividad de secuestro, or “kidnapping activity.”

On that occasion, students told Fusion that the trucks were taken to pressure the government into action and to raise funds for the parents of disappeared students, who have been sleeping at the Ayotzinapa school with little money for food or basic necessities while they wait for information about their missing children.

The hijacked Coca-Cola trucks remain parked on campus a week after being jacked. The soda bottles were distributed to those staying at the campus, or sold to raise funds for the families of missing students, according to a student who spoke with Fusion on condition of anonymity.

In other instances, the hijacked buses are used to transport students to protests or to other events, before eventually being returned to the companies.

“Its not quite stealing,” a professor from the Ayotzinapa school, who also did not want to be identified, told Fusion last week.

Classes have stopped at Ayotzinapa since the disappearance of the 43 students last month. The students said they will stage protests until the government reveals the whereabouts of their missing colleagues or until their remains are independently identified.

More than 500 protesters went to the state legislature where they were repelled by police. They then went to the state offices for Guererro, evacuated the employees before the building was set on fire. Follow #Ayotzinapa on twitter.