Above photo: ‘Land and liberty’, reads the hat of this Indigenous leader. Tamara Pearson.

For four months, Indigenous and local communities in Mexico have managed to blockade and shut down the Bonafont plant in Cuanala in Puebla state. Bonafont is a bottled water brand owned by Danone, a Paris-based food corporation.

With large rocks blocking the main entrance, as well as tents, a cooking station and more, the communities have used their permanent blockade as a space to hold workshops, forums and cultural events.

But on Sunday, August 1, they decided it was time to take over the plant and put it to better use. They called a public meeting with state authorities and Bonafont owners for Sunday, August 8. No officials showed up.

After putting the government and corporations on trial, with members of each community testifying to the abuse of land and water in their area, the 21 communities then entered the huge water-bottling plant and took it over on Sunday.

The action coincided with the anniversary of the birth of Mexican revolutionary Emiliano Zapata. Activists immediately disabled and destroyed security cameras within the plant and moved large structures to block other entrances. They shut down one of the wells within the plant that was used to extract water from the nearby Iztaccíhuatl volcanic springs, in the east of Puebla state. Bonafont had been extracting 1.4 million litres of water a day, in order to sell them for profit, while leaving locals without.

The communities will now hold assemblies throughout Sunday night in order to decide what they will do with the giant water bottling plant, so that the space can be used to benefit the people.

“We are open to dialogue, but not to negotiation. Our communities declare this looting company closed,” said one representative, who spoke anonymously. Activists fear criminalisation, imprisonment and murder for actions like the one taken Sunday.

“We have to defend what our ancestors left us with — this mother Earth,” said another community representative.

The Bonafont plant has been in the area since 1996. There are 16,000 water purification and bottling plants in Mexico. Danone, Coca-Cola and Pepsico are the main companies profiting from the natural resource nationally, with 82% of the market. 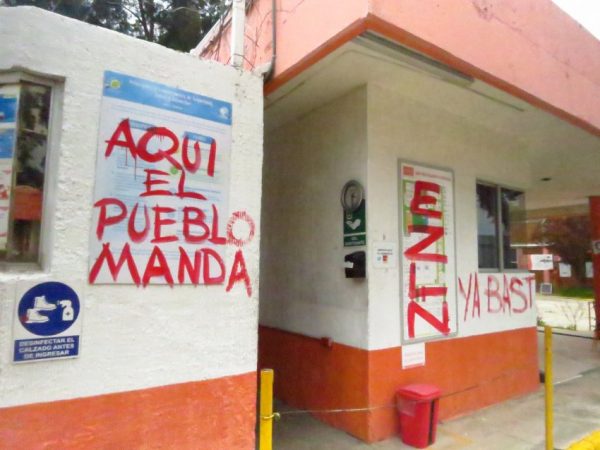 ‘Here, the people govern’, was painted near the entrance. Tamara Pearson

In Puebla State, Nestle Water and US company, Keurig Dr Pepper are also bottling water. Nestle takes water from the springs of the Popocatépetl and Iztaccíhuatl volcanoes. These companies pay, on average, 2600 pesos (AU$168) per year for a concession to extract water.

Tamara Pearson is a long-time journalist based in Latin America, and author of The Butterfly Prison. Her writings can be found at her blog. Twitter: @pajaritaroja.