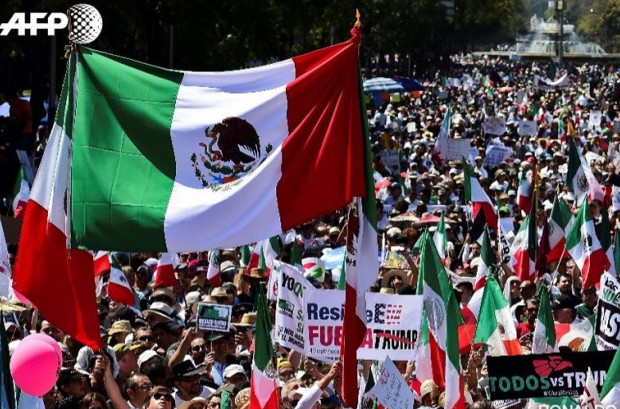 Tens of thousands of Mexicans protested Sunday against US President Donald Trump, hitting back at his anti-Mexican rhetoric and his depictions of them as “rapists” and “criminals” and to demand “the respecting of Mexico.

“Mexico must be respected, Mr Trump,” said a giant banner carried by protesters in Mexico City, who waved a sea of red, white and green Mexican flags as they marched down the capital’s main avenue.

In what is shaping up to be Mexico’s biggest anti-Trump protest yet, over 20 cities joined the call to march. Dozens of universities, business associations and civic organisations are backing the protest.

“It is time we citizens combine forces and unite our voices to show our indignation and rejection of President Trump, while contributing to the search for concrete solutions,” said the coalition behind the marches.

Protester Julieta Rosas was wearing a T-shirt with a picture of Trump sporting an Adolf Hitler mustache.

“We’re here to make Trump see and feel that an entire country, united, is rising up against him and his xenophobic, discriminatory and fascist stupidity,” said Rosas, a literature student at the National Autonomous University of Mexico (UNAM).

“We are all migrants. We are all one. This is a time to build bridges, not walls,” said 73-year-old protester Jose Antonio Sanchez, who was marching with his nine-year-old granddaughter.

From a friend in Mexico City. Big March there today to #resist Trump. Gracias! pic.twitter.com/OON7azVA1G

Protesters in Mexico City carrying their message for Donald Trump

Some Mexicans comparing Trump to Hitler with twitter: The ‘Twitler,’ during Anti-Trump rally in Mexico #VibraMexico @NBCNews pic.twitter.com/LIE6uIPuiD

From the #vibraméxico march in Mexico City, where people seemed equally angry with Trump and their own politicians pic.twitter.com/VzP6PcPLp3