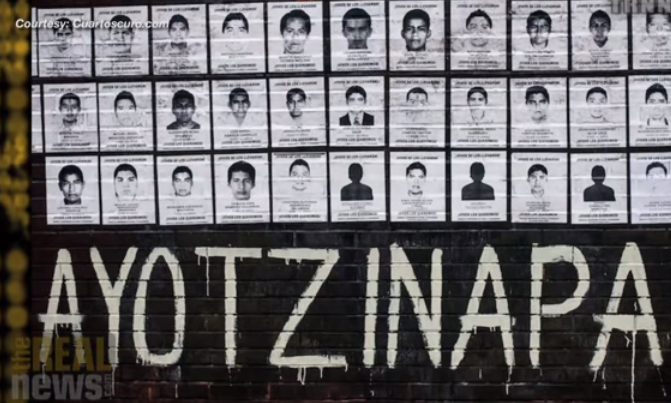 In protest the parents of the 43 Mexican students who disappeared last year started a 43-hour hunger strike on Wednesday. They are expected to meet with President Enrique Peña Nieto just before marking the first year since their children disappeared. The families gathered at Mexico City’s cathedral at Zocalo Square and declared the start of their protest at 7:00 PM.

Now joining me to discuss these events are two students, Diego Bautista and Ame Vera. They are activists in the student movement in Mexico City with Perspectiva Criticas. Thank you both for joining me today.

AME VERA: Hi, thank you for inviting us here.

PERIES: Diego, now, these parents have sat down in front of the cathedral. They’ve started a hunger strike. They’ve been mourning for the last year the loss of their children, and they’re going to be meeting with the president. What are they going the be asking for from the president?

BAUTISTA: They start a hunger strike of 43 hours, like in a symbolic issue of the important reason of these families. And they also, they have this meeting with the president because in the last weeks the commission of independent researchers put a new version of the case that said that its not true, the opinion and the version of the government. So they are asking for answers, and also for the life of their sons.

PERIES: Ame, you have been organizing on the ground in Mexico City. This movement is building, the more and more students are joining the movement. Give us a sense of the level of frustration and the kind of organizing that is going on in the city at the moment.

VERA: Well, I think that the kinds of [inaud.] represent an isolated factor. And so the murder and disappearance of 43 students represents the Mexican reality. It represents the clandestine graves in all the country, it represents all the massive human [mutilations] that have been occurring on the coattails of the displaced populations, people from the violence. And the people are feeling this like the representation of all these things that are happening in the country. So the level of frustration is very high in the country. The students are [assembling] suddenly from their schools, is–.

PERIES: Now, Mexico has gone through a very difficult and tumultuous year this year because of the loss of these students. However, the country itself has been under economic siege where there is high unemployment, very difficult economic conditions compiled and exasperated, I guess, by the narco trafficking and the levels of violence you’re speaking about. All are now converging in a very tense situation. Do you think that the social movements that are organizing in Mexico City have been reactivated as a result of this?

BAUTISTA: For sure, all of these things that you said are connected. For us it’s like the state politic that send us this big [crisis] of the country is connected to economical crisis that the students and the young people here don’t have opportunities to grow up in all the sense. Also within that the positive thing in this case is that we have a lot of resistance, like there’s more [villages] also in the cities of the working movement, and also for the students. So for us the goal is that all this different resistance can be united for a fight, first of all for the 43 students of Ayotzinapa, but also for changing the political way that is in Mexico.

PERIES: It appears that you are in a moment where you can actually gather the empathy of the people that can really relate to the parents, and it’s a moment to really organize and build a movement, which some people are calling the second revolution in Mexico in the works. Do you think that will come about?

PERIES: Ame, give us a sense of what kind of organizations are involved in organizing. You mentioned labor unions, but who else?

VERA: Mostly it has been students of different universities. Not only Mexico City but in all the country. They have been also the unions, [inaud.].

BAUTISTA: [Inaud.] yes. And also important component of the mobilization is the indigenous communities of the south of Mexico. Chiapas in Oaxaca, and especially in Guerrero, that are organizing like in community and horizontal ways that are really, really important for the movement and the [base].

PERIES: Diego Bautista and Ame Vera, thank you so much for joining us today. And you can count on the Real News, we’ll be following what you guys are doing on the ground there.

VERA: Thank you so much.

BAUTISTA: Thank you for this space, and also say that this weekend, that is the anniversary of Ayotzinapa, it will be global actions in a lot of countries, and also in United States it’s going to be in different cities, demonstrations supporting the 43 of Ayotzinapa. So we invite that weekend, make together this demonstrations.