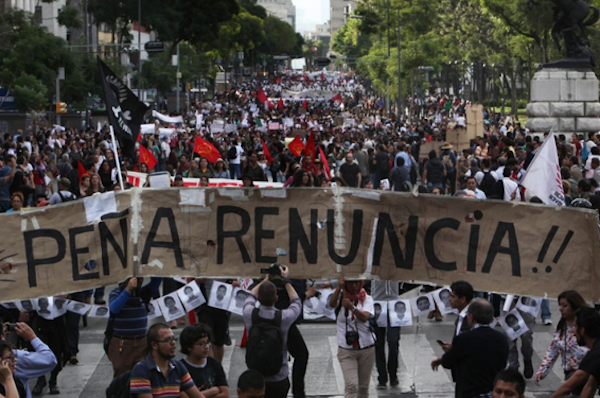 Students from major Mexico City universities have called a two-day strike and were set to hold a rally Wednesday at the national attorney general’s office to call for the safe return of dozens of rural students who disappeared after clashes with police in Guerrero state last month, leading to public outrage.

“We are on strike for 48 hours in support of the disappeared students in Guerrero,” Silvia Caballero, a 21-year-old student at the National Autonomous University of Mexico (UNAM), told Al Jazeera.

Survivors of the Sept. 26 violence joined Mexico City protesters in informal campus activities and rallies demanding justice for their missing classmates. Several other universities joined the UNAM strike on Tuesday and Wednesday. Family members of the missing students were to attend the protest at the attorney general’s office in the capital, organizers said.

Caballero said the strike was also in support of students and teachers protesting government education reforms, saying the two issues are linked because the Guerrero students were initially protesting those same reforms when police attacked them.

“(The reforms) will greatly affect public education in Mexico … they want to call it privatization and add fees to the university to make it more for the elite instead of the public,” Caballero said. The teacher training college the missing students attended in Ayotzinapa, in Guerrero state, is known for catering to the poor and indigenous.

Last month, the students were protesting in the town of Iguala in Guerrero state when local police opened fire on them — killing three students and several bystanders. Afterward, 43 students disappeared. A local gang leader later said that police had ordered him to kill 17 of the students.

Protesters set fire to government buildings on Tuesday in Guerrero’s capital, Chilpancingo, demanding Gov. Angel Aguirre’s resignation over the state’s handling of the case. At least 35 busloads of teacher training students from Michoacán traveled to neighboring Guerrero the same day to join demonstrations.

Three dozen local police officers have been arrested in connection with the crimes, Mexican Attorney General Jesús Murillo said Tuesday at a news conference. Iguala Mayor José Luis Abarca, who along with this wife has been accused of being in league with organized crime in Guerrero, fled his office and went into hiding soon after the disappearances.

A number of mass graves were discovered in the weeks following the clashes, but Murillo said Tuesday that DNA from the 28 charred bodies found in the first site to be tested, located on the outskirts of Iguala, did not match that of the missing students’ families — who continue to demand their safe return, saying, “They were taken alive. We want them back alive.”

A statement released by Guerrero’s Popular Revolutionary Army (EPR), a local citizen self-defense group, said the missing students were likely being held and tortured by security forces. They cited previous cases in the neighboring state of Michoacán, where state facilities were used to torture students who were temporarily missing.

“The EPR considers the statement from the local government — that they will ‘focus’ on finding them — to be a mockery,” the statement said. “There is proof that it was paramilitary police who took the student teachers at a raid coordinated between the local, state, and federal police along with the army, the [Mexican] marines and the paramilitary.”

The group rejected claims that organized crime groups had infiltrated police forces, calling the assertion a “political move to dilute the responsibility of the state as well as to guarantee impunity to the material and intellectual authors of this crime.”

The alleged leader of the Guerreros Unidos drug gang accused in the disappearance of the 43 students reportedly killed himself during a clash with Mexican security forces on Tuesday. Federal police and military were attempting to capture the man, Benjamin Mondragon, in the neighboring state of Morelos.

Guerrero — one of Mexico’s poorest states — is home to self-defense movements, which consist of armed citizen patrols protecting their communities from drug related violence and the effects of Mexico’s so-called Dirty War from the 1960s to the 1980s. Thousands who opposed government policies during this time were killed or forcibly disappeared.

In the late 1990s the Mexican government made a concerted push to combat police corruption, which had allowed the drug trade to blossom, by militarizing local police forces. That militarization intensified under the reign of former President Felipe Calderón, especially under the 2007 Mérida Initiative, which earmarked nearly $1.4 million for security cooperation between the United States, Mexico and Central America. Human rights groups, meanwhile, have long claimed that criminal organizations systematically corrupt Mexico’s political system to guarantee market access to drugs and the free flow of narcotics.

In an August survey, 41 percent of respondents said they believed that both the government and criminal organizations, as opposed to one or the other, carry out such forced disappearances.

President Enrique Peña Nieto, meanwhile, has vowed to find those responsible for the students’ disappearance. While in office, he has tried to divert attention from the country’s rampant violence and toward a series of economic reforms.

But the president’s Institutional Revolutionary party (PRI) has long been accused ofinvolvement in extrajudicial killings and drug cartels during its previous rule from 1929 to 1999.

Up to 300 students and other civilians were killed by government security forces in Mexico City’s Tlatelolco massacre of Oct. 2, 1968. No officials were ever prosecuted for the killings, and students often organize massive protests on the same date calling for justice.

“We know that the violence in Mexico is unacceptable,” Abraham González Montaño, a 21-year-old political science student at UNAM, told Al Jazeera. “It is unacceptable because we freely express whatever issue is out there and what is happening now is a wave of repression and violence against free opinions.”